Bishop 'could not keep silent' 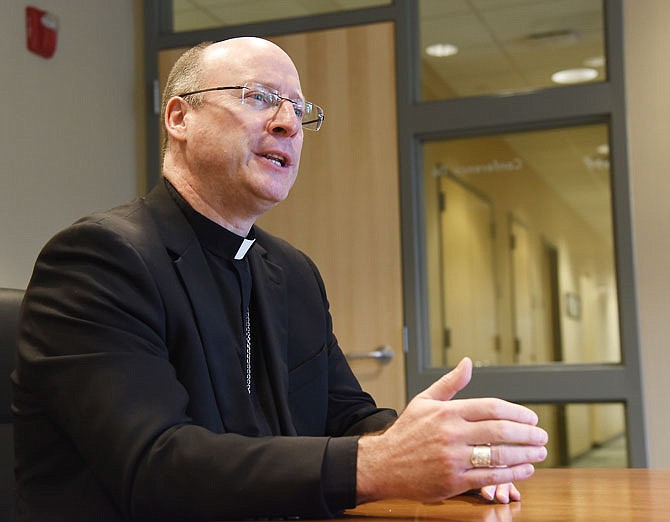 Bishop Shawn McKnight is seated for an interview Monday, Nov. 19, 2018, at the Jefferson City Diocese Chancery.

Bishop W. Shawn McKnight of the Diocese of Jefferson City - one of the youngest and newest of those attending the U.S. Conference of Catholic Bishops - was among the first and loudest to respond when the Vatican asked the conference to delay action on the sexual abuse crisis facing the church.

Many were surprised. Maybe none more so than McKnight.

"I made the promise to myself that I would not speak at my first major general assembly out of deference. You're the new guy, and you need to learn how this crisis works," McKnight said Monday. "But, when this crisis blew up and the November assembly was focused primarily on addressing it. The way this was happening, I could not keep silent, no matter how young I am."

The U.S. bishops meet annually to promote the greater good the church can do for humankind, according to the conference website, and fits programs to circumstances as required. The agenda going into this year's conference in Baltimore was to create a strategy to deal with the growing clergy sexual abuse crisis across the country.

McKnight recognized early last week (when the conference started) that he was frustrated, and perhaps a little angry that certain former bishops were at the conference.

Among them was James Timlin, who had been named in a Pennsylvania grand jury report. When Timlin served as bishop in Scranton, Pennsylvania, he reassigned a priest who had raped a girl and arranged for the church to pay her family $75,000 to remain silent. He resigned as bishop in 2003, when he turned 75, the age of mandatory retirement.

McKnight said he was disturbed Cardinal Roger Mahoney, who is barred from public ministry because he systematically covered up clergy abuse, spoke during the conference.

Since his ordination in February, McKnight has been working to address community concerns about sexual abuse, which he said tests the faith of the people.

Revelations about Cardinal Archbishop Theodore McCarrick, the former archbishop of Washington, D.C., who was suspended in July over allegations he sexually abused seminary students and later retired, demonstrated an egregious abuse of power, McKnight said. Less than a month later, in August, a Pennsylvania grand jury released a report on clergy abuse.

Shortly thereafter, while following the lead of the Diocese of St. Louis, he added the Diocese of Jefferson City to an independent investigation into potential sexual abuse that Missouri Attorney General Josh Hawley's office is conducting.

"Last week, our attorneys met with the Attorney General's Office, and there is a plan in place - there's movement, if you will," McKnight said. "It is moving forward. We continue to cooperate with them."

Hawley's staff has reviewed the diocese's files "in a global manner," McKnight said. And he anticipates there will be news coming from the attorney general soon.

This summer, McKnight created an interim protocol for his diocese, in which any allegation of sexual abuse made against a bishop will be referred to an independent investigator who will make an initial determination of whether there is any truth to it.

If so, the bishop will request a leave of absence from the pope until a preliminary investigation can be completed and a report submitted to the Review Board of the Archdiocese of St. Louis. That board will then make a recommendation to the apostolic nuncio (the Pope's representative in the United States).

Early this month, McKnight released the names of 29 priests and religious brothers who had formerly served in his diocese who had been "credibly accused" of sexually abusing an unknown number of children, as well as four others who served in the diocese, but were found by the bishop to be unsuitable for ministry out of concern for the safety of children.

In a statement released Friday, he said he was disappointed the Holy See (basically the administrative government that organizes and oversees operations of the Vatican) had paused the conference's action until after a worldwide meeting of presidents of bishops - leading bishops from each country - in February.

The meeting is an "extraordinary" gathering that rarely happens, he said.

"We don't know why (the Vatican asked the bishops to wait) - and that's why my intervention from the floor was very careful to recognize it's disappointing that this had to happen," McKnight said. "Why it happened, I don't know. We weren't given the full explanation or the context for it. Maybe, there are good reasons."

One reason may have to do with rumors that floated during the conference, he said. Was the Vatican request based on something the U.S. bishops did, or was something else at play?

"The rumor on the floor was that the Holy See is planning a more substantive intervention for this meeting in February. There was no prohibition that the (U.S.) bishops vote on these," he said. "There is still the option for us to return to these proposals, but only after the February meeting."

A concern, McKnight said, is that as a global church, its members have so many different cultures and places whose histories are on different time lines. For example, he said, the United States is well ahead of other countries where it comes to dealing with clergy sexual abuse.

"And I am somewhat fearful that what will come from the February meeting may not be enough for what we need here in the United states," McKnight said.

The bishops intended to implement a plan that greatly included lay people to help investigate allegations and make recommendations.

However, the Most Rev. Christophe Louis Yves Georges Pierre, apostolic nuncio to the United States (a diplomatic missionary representing Pope Francis), spoke during the conference and was critical of the proposed reliance on laity.

"I see no other way through. And as I believe and understand - my vision of the utilization of the laity in helping us solve this problem is completely in line with the teachings of the Council Fathers of the Second Vatican Council," McKnight said. "That is, that we not only can use, but we're obliged to use the expertise and talents, gifts and charisms of the laity. And I think this is a time for it."

History proves the Catholic Church doesn't have a good track record of policing itself, McKnight said.

And in the Friday statement, McKnight called on priests and bishops to come forward on their own and repent publicly of sins of omission or commission with regards to sexual abuse. He asked the clergy to be men and not cowards, and to come clean on their own.

As of Monday, none had, he said.

McKnight took a number of lessons from informal community conversations he held throughout the diocese during the weeks leading up to the Baltimore conference.

"One of the concerns - one of the things I learned through the listening sessions I had here in the diocese - is how many people don't understand how all this has happened. Many have said, 'Why don't you just turn it all over to law enforcement? You shouldn't be doing any investigating on the church side. It should be all done by law enforcement,'" he said.

The church asks anything that may be a crime be reported first to law enforcement. Despite the 29 credible accusations in the diocese, only one priest was convicted of a crime.

"For us as a church, that's not good enough. Just because criminally, they were not found guilty, doesn't mean we don't have the responsibility to do our best according to our standard," McKnight said.

The diocese released data showing that since 2003, it had spent about $2.1 million on the care of priests credibly accused of sexual abuse - $1.8 million of which came from the diocesan infirm priest fund and another $300,000 from the Community Reconciliation Fund.

Regular contributors to the church - people who contribute to Sunday collections - should know their money is not going to be used for the accused, McKnight said.

"I am grateful for those who recognize - who were generous anonymous donors - to provide the bishop and the Diocese of Jefferson City the means to take care of those who are victims of clergy sexual abuse, but also those who did the abusing. The great difficulty we have is, 'Do we just dump them off on society and say they are not ours anymore?' How does that help? McKnight asked. "There's always going to be a need to tend to them as well - not only for their own good, but for the good of the church and the good of society."