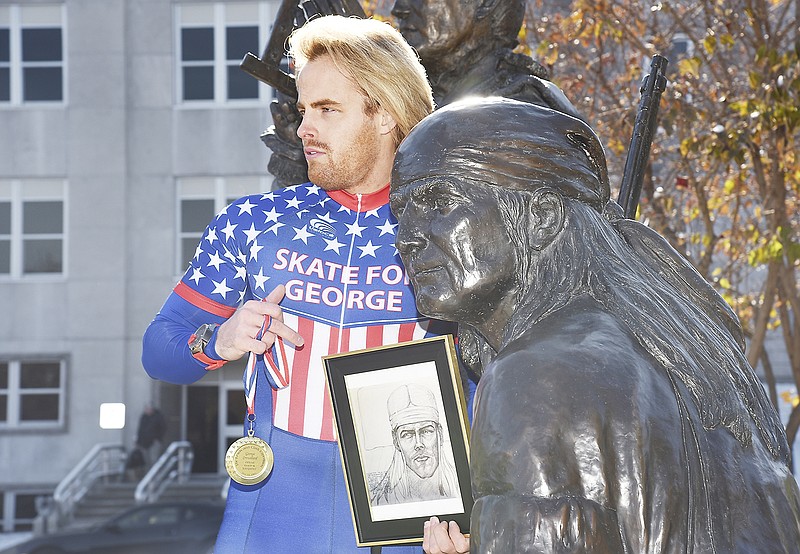 Cory Skyler Drouillard displays a medal Tuesday while standing beside a statue of his fourth great-uncle, George Drouillard. George was a French Canadian-Shawnee hunter, interpreter, scout and cartographer for Meriwether Lewis and William Clark's Corps of Discovery Expedition to chart the land acquired from France in the Louisiana Purchase.

A descendant of an often historically overlooked Lewis and Clark Expedition member started Tuesday in Jefferson City a tour of the 50 states to convince state education commissioners and superintendents across the country to include George Drouillard in history lessons.

Cory Skyler Drouillard, 28, Virginia-born and currently of Beverly Hills, California, said George Drouillard is his fourth great-uncle. George was a French Canadian-Shawnee hunter, interpreter, scout and cartographer for Meriwether Lewis and William Clark's Corps of Discovery Expedition to chart the land acquired from France in the Louisiana Purchase.

Sabra Tull Meyer's sculptures at the Lewis and Clark Trailhead Plaza at the corner of Jefferson Street and Capitol Avenue in Jefferson City include George Drouillard.

"This man was an integral figure in the greatest adventure in American history," Cory said Tuesday.

There is not necessarily a lack of information about George available - son of a French father and Shawnee mother and recruited by the Corps at Fort Massac in Illinois, according to U.S. Army information; someone who Lewis considered a "'man of much merit' who had 'acquitted himself with honor'" on the Expedition, according to The Oregon History Project.

Cory said he's not really sure why more people don't know of George - "it's a back story that just wasn't included" in the historical narrative of the Lewis and Clark Expedition.

On Tuesday, Cory brought a medal to the Trailhead Plaza to put around the neck of George's statue and visited the Missouri Department of Elementary and Secondary Education across the street. This was not the first time he's been in Jefferson City to campaign for his fourth great-uncle's legacy.

Cory launched in 2014 an educational campaign about George from Jefferson City, that he brought attention to by speed skating much of the length of the Corps' original 1802 route from Missouri to the Pacific coast of Oregon. Cory is a former national inline speed skating champion, and is a stock video content provider and artist.

"Skate for George" has continued, but four years later, Cory said, "I've funded this for four years with my own funds, and now I want the American people to get involved."

He has a GoFundMe campaign at gofundme.com/skate-for-george for contributions to support his travels around the country, this time to hand deliver a letter and information on George to state education commissioners and superintendents in each state to encourage them to have George included in lessons on the Lewis and Clark Expedition.

More specifically, Cory wants to "encourage the Commissioner of Education (in each state) not to accept any books from publishers of school textbooks from elementary to high school level unless they provide the story of George Drouillard," according to skateforgeorge.com.

However, things are a bit more complicated than that, as in Missouri, DESE does not mandate curriculum, and individual school districts hold most of the power of what's taught in classrooms.

DESE's Communications Coordinator Nancy Bowles said some districts may have the same textbooks as others, but that's not by the state's design.

"They seemed really interested in the information that we were providing. To me, it seemed like they were willing to do anything and everything" to help, Cory said, adding, "they couldn't necessarily themselves make it happen, but they can certainly give us the directions, they can hand it off to the people who need to have it."

Cory said he was directed to an association of social studies educators.

After Jefferson City, he said his travels would next take him to Springfield, Illinois; Indianapolis, Indiana; Columbus, Ohio; and Frankfort, Kentucky; and then 10 more cities after that.

He picked Nov. 13 as the kick-off date because that's the date in 1803 when George was officially hired for the Corps of Discovery Expedition at Fort Massac.

In addition to "Skating for George," Cory has also gone on another expedition of his own to raise awareness for Native American history. In 2013, he walked the safely and legally navigable stretches of 875 miles of California coastline to collect money along the way to purchase land to build a contemporary village where the Ohlone people once lived in Monterey before the Spanish took the land, according to local media reports.

Bowles said she wasn't aware of another time that someone has stopped by DESE to advocate for the inclusion of a family member into history like Cory.

"It gives it a different story to the whole thing," Cory said of what effect including George Drouillard might have, adding "maybe what this will do is engage the student and give them the opportunity to be inspired."

He said American students learn about the Lewis and Clark Expedition in grades K-12, not college, so K-12 is where he's focusing his efforts. "In order to get (George Drouillard) into history, I think I've got to hit at the heart of the American student," he said.