Faughn repeats claims money delivered to Watkins was his 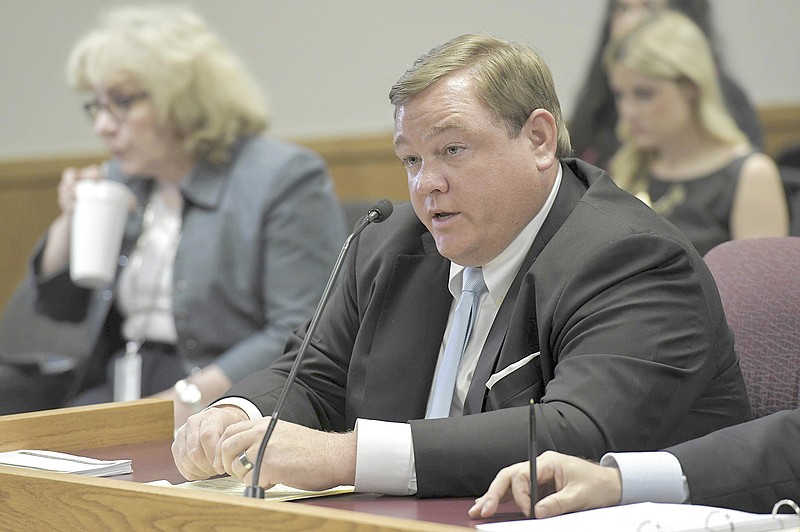 Scott Faughn addressed the special House committee Wednesday. The publisher of Missouri Times said he delivered a total of $120,000 to St. Louis lawyer Al Watkins in 2017.

Scott Faughn on Wednesday told the special House committee investigating Gov. Eric Greitens' legal situation that he had delivered a total of $120,000 to St. Louis lawyer Al Watkins in 2017.

Faughn, publisher of the Missouri Times and host of a weekly television show on Missouri politics, spent three hours answering committee members' questions with Jefferson City lawyer Chuck Hatfield by his side and, occasionally, telling Faughn not to answer some of the questions.

"I'm going to advise him not to answer questions about his internal business workings," Hatfield told committee chairman Jay Barnes, R-Jefferson City. "That's private information, and it is not relevant to this committee.

"It doesn't matter whether he got his money from an ATM or sold his substantial stein collection in order to raise the money or a birthday gift from his grandmother."

However, Barnes countered: "I think the people of this state deserve to know who, or what entities, are manipulating their state government, by whatever means.

"And one of the ways to do that is to figure out what the source of that cash was."

Watkins, who represents the ex-husband of the woman who reportedly had an affair with Greitens in 2015, first reported the cash donations during a court appearance earlier this year.

He's said Faughn personally delivered $50,000 and someone else delivered another $50,000 a few days later.

Watkins is scheduled to testify during this morning's committee hearing.

Faughn said the other money was delivered by one of his employees, but didn't remember the name.

"I've heard that," Faughn said. "I have no recollection of telling him that.

"I don't know how to say it more directly - this was my money."

He said some of the confusion may be because of miscommunication between himself and Watkins.

Barnes said: "No one believes that it's your own money."

Greitens, his attorneys and supporters have said the money may have come from groups that support low-income housing tax credits the governor worked last year to block.

However, Faughn repeatedly denied the money came from any source other than himself.

That didn't sit well with attorneys Eddie Greim and Ed Dowd, who - unsuccessfully - asked Barnes to let them cross-examine Faughn and, also, asked the committee to issue subpoenas for Faughn's business and bank records.

"This witness was here so that, hopefully, the committee and everybody in this state could find out where this money - $120,000 in cash - originated," Dowd told reporters. "And the witness just continually said, 'I'm not answering that question.'"

Greim, who's been hired to represent the governor's office and Greitens in his official capacity, said - had he and Dowd been allowed to cross-examine Faughn based on information they have from Greitens, that the committee doesn't have - "We could have been getting to the truth. Instead, we have another day of theater and interesting questions, without the tools to hold the witness to the truth.

Dowd, who is one of Greitens' personal lawyers, said the payments were an attempt "to subvert our government," arguing the first $50,000 payment was timed to the Jan. 11 release of the first public report of the governor's affair.

Faughn said several times during Wednesday's hearing that he used the money to buy copies of audio recordings the woman's now-ex-husband had made, while the couple were still married.

In those recordings, made just a few days after the woman's first encounter with Greitens, she acknowledged having the affair while she and her husband had been separated.

Greitens has admitted to having an affair, but has denied any allegations of criminal wrong-doing.

Faughn said he planned to use the recordings to help write a book he's been working on about Missouri politics during the last three years.

Faughn said he had heard rumors for some time that Greitens was involved in some kind of problem and Watkins "was in possession of some proof" of Greitens' involvement.

He approached Watkins in St. Louis County and they, eventually, negotiated the $100,000 price, with another $20,000 to be paid as legal fees for Watkins to do some work for Faughn.

Faughn said he only spoke to the woman once, when he asked for an interview with her and she refused. He never has met or talked with her ex-husband.

He acknowledged he should have gotten some kind of agreement to be the exclusive recipient of the recordings, but his inexperience prevented him from getting that agreement in exchange for his $100,000.

Dowd questioned Faughn's having the money to make the payment in January 2018, when he had been sued for non-payment of bills for printing the Missouri Times the previous November.

Faughn acknowledged he was convicted of forgery in a 2007 jury trial.

He said he was 22 when he committed the crime.

"It is something in my past, that I dealt with," he said. "In my life, I've made mistakes. I've fought through some things and, yeah, I don't duck it (or) deny it.

"I look for ways to help other people have a second shot at different things, like I've had."

Committee members also spent about six hours Wednesday continuing to read transcripts from Greitens' attorneys' April 2018 deposition with the woman - the governor's former hairdresser - who has said that, during their 2015 affair, he slapped her and, on the date of their first encounter, blindfolded her and bound her hands, then ripped of her clothes and took a photograph of her while she was at least partially nude.

On Feb. 22, a St. Louis grand jury indicted Greitens for felony invasion of privacy for that incident, but the St. Louis circuit attorney dismissed the charge May 14, just hours before the governor's trial on the charge was to begin.

This week, Circuit Judge Rex Burlison named Jackson County Prosecutor Jean Peters Baker as a special prosecutor in the case, to determine if the felony charge should be refiled.

As they did Tuesday, committee members continued to work two-at-a-time to read the questions from Greitens' attorneys and the woman's answers.

Wednesday's readings showed the governor's lawyers asked the woman about a wide range of questions, from belly button piercing to times she lied to friends and family about Greitens, and intimate details of her several sexual encounters with the governor.

The lawyers also questioned her about her relationship with state Rep. Stacey Newman, D-Richmond Heights, who reportedly offered the woman numbers to be used for contacting the circuit attorney's office after her affair with Greitens became public Jan. 11 - when St. Louis television station KMOV reported on it about an hour after the governor had finished his State of the State address.

The woman's relationship with Greitens began because she had cut his hair at a salon near the governor's St. Louis home.

She said she had known the Newman family for years because she had cut their hair, too.

More reading from depositions is planned for today and Friday.

The Associated Press contributed information used in this story.