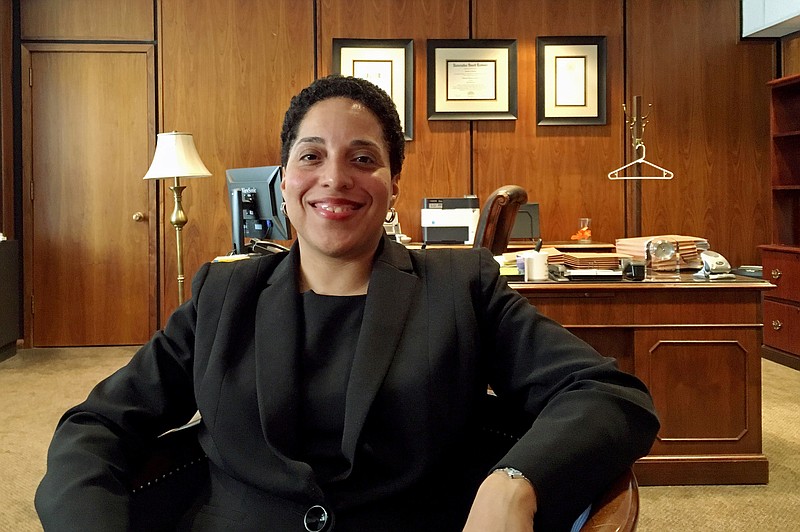 In this Wednesday, May 16, 2018, photo, St. Louis Circuit Attorney Kim Gardner poses for a photo in her office in St. Louis. (AP Photo/Jim Salter)

ST. LOUIS (AP) - The St. Louis prosecutor whose office now finds itself under investigation by police over its handling of a criminal case against Gov. Eric Greitens said his attorneys twice threatened to "ruin" her if she didn't back off investigations of the governor.

St. Louis Circuit Attorney Kim Gardner spoke to the Associated Press on Wednesday, two days after her office dismissed an invasion-of-privacy case stemming from Greitens' 2015 affair with his St. Louis hairdresser. She said a decision is expected by June 1 on whether to refile the felony charge.

Gardner said that on March 16, three weeks after the indictment accusing the governor of taking a compromising photo of his hairdresser without her permission, several of Greitens' lawyers came to her office to try to persuade her to drop the case. "Basically they told me I would be ruined personally, professionally, and it's only going to get worse," she said.

She alleged a similar threat was made in April shortly before she filed a second felony charge alleging Greitens illegally used a donor list from a veterans charity he founded to raise money for his gubernatorial campaign. No trial date has been set on that charge of tampering with computer data.

Separate from any criminal allegations, Greitens faces investigations by lawmakers, who plan to hold a special session starting Friday to consider whether to pursue impeachment and try to remove him from office.

"No matter what they throw at me, no matter how painful they try to make it, no matter how much suffering they want to put me and my family through and my team through we are going to step forward day after day after day, and we are going to continue in our mission to fight for the people of Missouri," Greitens said Thursday at the end of a celebratory speech announcing funding for biodiesel facilities.

Earlier in the week, Greitens had declared "victory" after the invasion-of-privacy case was dismissed.

In the lead up to the since-canceled trial, Greitens' attorneys focused on the competence of Gardner and a private investigator she hired, William Tisaby. They accused Tisaby of perjury and hiding evidence, and Gardner of allowing those misdeeds to happen. St. Louis police launched a perjury investigation into Tisaby on Tuesday, a day after meeting with Greitens' attorneys.

Gardner, a Democrat elected in 2016, now sees her own office under investigation by a police department she's sometimes been at odds with. In contrast to Gardner, who ran for office pledging to hold law enforcement accountable when officers cross the line, Greitens ran on a law-and-order platform. Since taking office, the first-term Republican governor has frequently posted support of police on social media.

The uneasy relationship between Gardner and St. Louis police is one reason why she turned to Tisaby, rather than relying on local police to investigate Greitens.

Gardner said that when she contacted St. Louis police Chief John Hayden after audio surfaced in January of the woman involved in the affair talking about the alleged photo, he told her public corruption cases "are best-suited for the feds." Police spokeswoman Schron Jackson said Hayden simply suggested the U.S. attorney be contacted for advice.

Gardner, believing she lacked police support, decided to hire a private investigator. She said many local options had a connection to the Dowd Bennett law firm, where four of Greitens' six attorneys work, so she turned to Tisaby, a former FBI agent who lives in Alabama.

Gardner said she decided to dismiss the case after the judge granted a request by Greitens' lawyers to call her to testify about Tisaby. Gardner said that put her in the "impossible" position of being a witness in a case she was prosecuting.

The Rev. Darryl Gray, a community activist who is black, said there's a racial undercurrent in the criticism of Gardner, St. Louis' first black circuit attorney. Nearly all of the men killed in recent St. Louis police shootings were black, as were many protesters.

"All of that combined leads us to believe that the types of attacks on her character, on her credibility, on her competency are part and parcel to her racial makeup," Gray said.

Last year, Gardner's office prosecuted a white former officer, Jason Stockley, in the shooting death of a black suspect. His acquittal led to weeks of protests and hundreds of arrests. As a candidate, Greitens asserted that he could have brought peace to Ferguson, Missouri, after the 2014 fatal police shooting of Michael Brown "by the second night" if he had been in charge. After the Stockley verdict, Greitens repeatedly warned that those who rioted, assaulted police or vandalized property would be arrested.