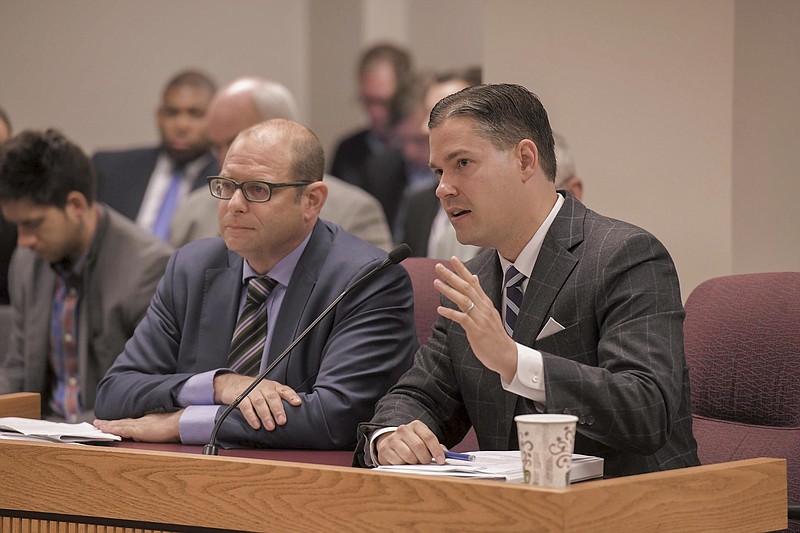 Attorneys representing Gov. Eric Greitens speak Wednesday to members of the House Special Investigative Committee on Oversight during a meeting.

However, much of the discussion revolved around procedures the committee will have and what role the Greitens team will play during the special session.

"We've been accused of getting one-sided information," Barnes reminded two attorneys who represent the governor's office and Greitens in his official capacity as governor. "We'd be happy to get both sides - but that's not been available to us. When can we expect to hear from Gov. Greitens?"

Barnes later asked if it would help if he got on his knees and begged for the governor to appear before the committee.

Lawyers Eddie Greim, of Kansas City, and Ross Garber, of Washington, D.C., told the committee: "The decision about whether or when the governor testifies are decisions that will be made by (his) personal-capacity counsel," referring to the governor's personal attorneys at the Dowd Bennett law firm in St. Louis - who have been handling his defense in two criminal cases in St. Louis.

The committee began meeting in closed sessions March 7, interviewing witnesses involved in the St. Louis case and in other areas where the governor has been accused of wrongdoing.

St. Louis Circuit Attorney Kim Gardner dismissed the invasion of privacy case Monday, hours before the governor's trial was set to begin on the charge, and after Circuit Judge Rex Burlison ruled Greitens' defense team could call Gardner as a witness in the trial.

Garber said Lucinda Luetkemeyer, legal counsel for the governor's office, asked him if he'd be interested in representing Greitens as the House committee continued its investigation into the governor's legal situation.

When Rep. Don Phillips, R-Kimberling City and the panel's vice chairman, asked why the governor's office needed two attorneys, Greim said: "Mr. Garber is a national expert on impeachment of the governor (and) it is pretty natural to have two lawyers" working on complicated issues.

Greim noted the House committee - which includes three attorneys among its seven members - also hired two lawyers to act as special counsel for its work.

Former Supreme Court Judge Edward D. "Chip" Robertson and former Pettis County Prosecutor Mark Kempton - who both now are private-practice attorneys - agreed last month to advise the committee on some of its work.

They aren't charging for their services, but will be reimbursed by the House for their expenses.

Several committee members pressed Greim and Garber for information about their contracts with, and work for, the governor's office.

Rep. Gina Mitten, D-Richmond Heights and one of the panel's three attorneys, reminded Greim and Garber: "Given that you guys are paid with taxpayer dollars it's important that all of us understand the extent of your representation."

Greim told the committee he's charging the state $340 an hour for his work on the governor's case, while Garber said his contract is for $320 an hour, "which is half of my normal rate."

During much of the first hour of the committee's Wednesday meeting, lawmakers pushed to get more details about the lawyers' work, including asking about potential conflicts of interest based on other clients they have or have had.

Greim countered, "This is not the matter we came here to talk about. Our laser-like focus is to get the procedure set so that adequate due-process is given."

Garber added, "Right now, this committee is embarking on, and has been involved in, an historic process of investigating a sitting governor. And that implicates very significant issues of separation of powers and balance of powers - significant constitutional issues."

Garber reminded the committee several times that, if they decide to recommend that the House impeach Greitens so he could be removed from office if convicted of the impeachment articles, "What's at stake is the potential reversal of an election."

He reminded the House committee that only 15 governors have been impeached in the nation's history, only eight of those cases resulted in the governor's being removed from office and only two of those impeachments have been since World War II.

"This is a weighty task (and) truly a rare event in history," Garber said.

Greim and Garber argued the House committee should be following a process where the hearings are open to the public and Greitens' lawyers have a chance to cross-examine witnesses.

"Why would we adopt anything less than an open, fair proceeding to find the facts?" Greim asked.

Barnes said, "We share a common desire to have an open and fair process (but) this committee has been trying to find the truth from the start. We want to hear from Mr. Greitens. The question isn't 'Is the process fair?' but 'Who's going to be in charge?'"

Greim and Garber last week submitted proposed "ground rules" for the committee to follow in its meetings during the 30-day special session that starts at 6:30 p.m. Friday.

Their requests included using the first couple of weeks to trade witness lists and information, followed by public hearings during the week of June 4-8.

The Constitution requires the special session to end June 17.

Under Greitens' lawyers' proposal, the House would have one week to debate and approve articles of impeachment - if that's the committee's recommendation - and give the state Senate time to elect seven judges to hear the trial on the impeachment charges.

Greim and Garber admitted during a news conference that it's a tight schedule, but doable.

The committee made no decision Wednesday about adopting the proposed schedule or settling on something else.