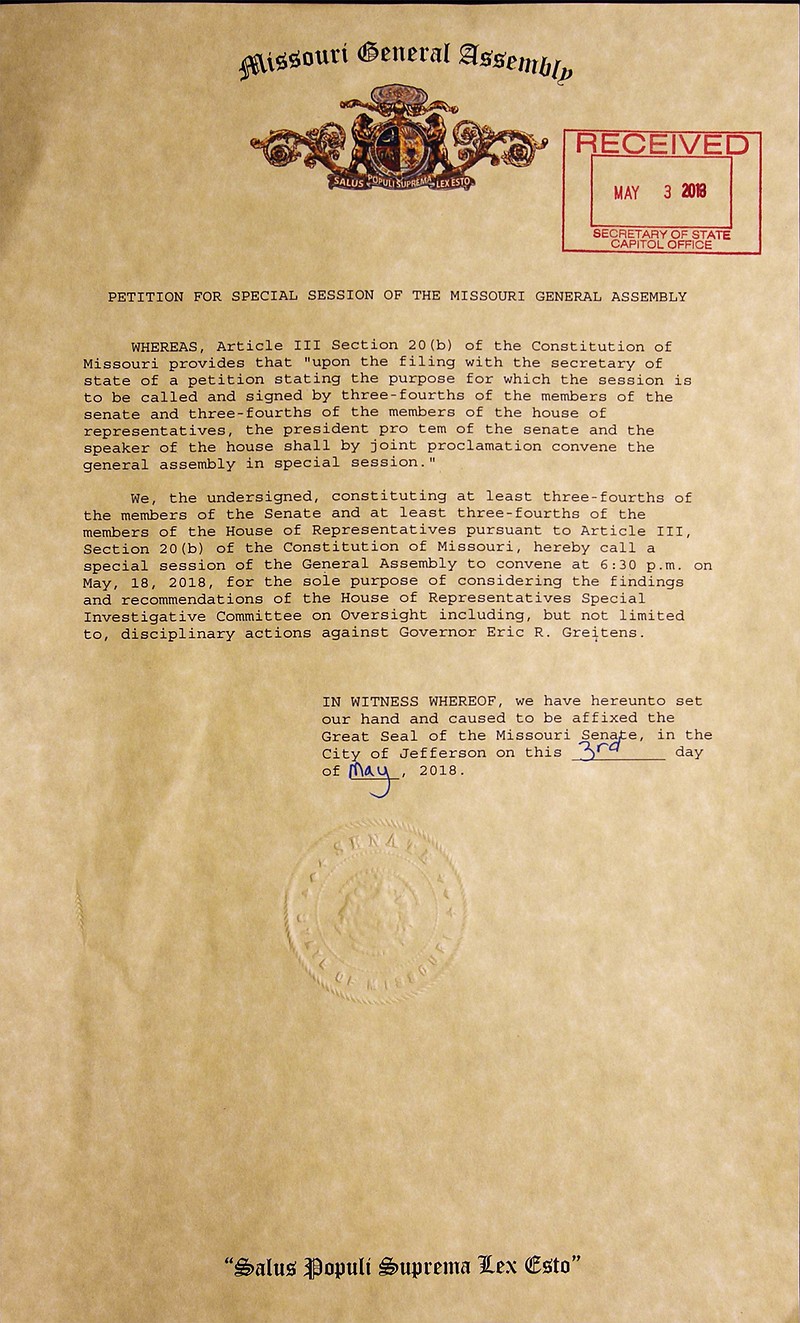 The Missouri General Assembly submitted a petition to the Missouri Secretary of State's Office on Thursday, May 3, 2018, to call a special session to consider disciplinary action against Gov. Eric Greitens.

All of Mid-Missouri's lawmakers signed the petition calling the Legislature back for its own special session to consider disciplinary action against Gov. Eric Greitens.

Appropriations Chairman Dan Brown, R-Rolla, was one of four senators who didn't sign the petition.

None of the 16 House members who didn't sign the petition were from Mid-Missouri.

"The Governor has been charged with at least two felonies, and if the body really felt that the charges were as serious as their political posturing, then why are we not dealing with the issue during regular session?" Ellington said. "It's fiscally irresponsible to convene a special session at an estimated cost of $125,000 per five day session when we have over 10 days left in (the current) session."

House Speaker Todd Richardson, R-Poplar Bluff, told reporters Thursday one reason for the special session was to give the special committee more time to finish its investigation of the governor's situation.

That committee also was charged with making a recommendation for whether the governor should be impeached - and it hasn't announced that recommendation.

Chairman Jay Barnes said Friday he had no comment.

Voters in 1988 approved the process for lawmakers to call their own special session, and this year is the first time the process has been used.

Legislative leaders announced plans to circulate a special session petition on April 11, after the House Special Investigative Committee on Oversight released its first report, detailing an affair Greitens had in 2015 with his hairdresser - including allegations the then-future governor tied the woman to exercise bars in the basement of his St. Louis home, ripped off some of the clothes he had given her to wear, took her picture without her permission and convinced her to have oral sex with him.

The governor has admitted to the affair but denied the other allegations, calling them "falsehoods and lies."

A St. Louis grand jury indicted Greitens with invasion of privacy for that incident - a Class D felony that, if he's convicted, could result in a prison sentence of up to four years.

His trial on that charge begins May 14 - a week from Monday.

On April 22, St. Louis Circuit Attorney Kim Gardner filed a second felony charge against Greitens, of tampering with a computer for taking donor and email lists from The Mission Continues charity the governor helped found in 2007 then using that information to raise funds for his 2016 gubernatorial campaign.

"She is wasting thousands and thousands of taxpayer dollars to do all of this," he said in a Facebook post. "Her original case is falling apart - so today (April 22), she's brought a new one. By now, everyone knows what this is: this prosecutor will use any charge she can to smear me.

The House, which had gathered 138 representatives' signatures in the three weeks since the committee's first report, turned the petition over to the Senate on Thursday - and 29 senators had signed it by the end of the day.

The Constitution only requires signatures from three-fourths (75 percent) of the members in each chamber - but they got 84.66 percent participation in the House and 85.29 percent in the Senate.