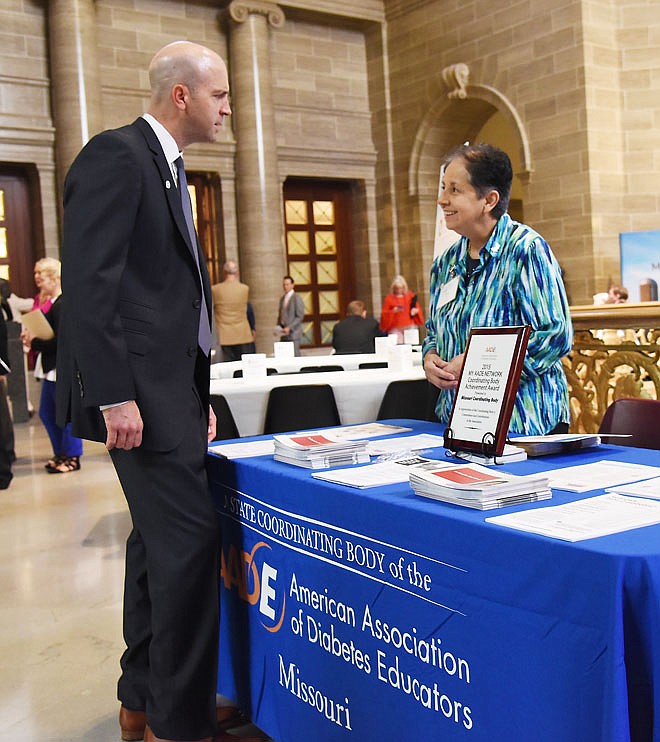 Nancy Trebilcock with the American Association of Diabetes Educators visits with Seth Nieuwenhuis during Wednesday Diabetes Resource Fair in the Capitol Rotunda. She is a registered nurse and certified diabetes educator and talked with Nieuwenhuis, who works for Boehringer-Ingelheim Pharmaceutical about the growing numbers of persons with pre-diabetes and diabetes and how to combat that issue.

Lauri Carr knows well the effects diabetes has on a person and their family.

Her brother, 51, died of diabetes-related complications during flu season in December, she said.

Her mother, who suffered from heart disease, died of a heart attack the next day.

Carr realized the diabetes resource fair and rally held Wednesday afternoon in the state Capitol was the ideal time to share her concerns about people's health.

"I need to support families that have these very same issues going on," Carr said. "It's overwhelmingly scary to see children who are morbidly obese."

In an effort to raise awareness of the correlation between Type 2 diabetes and cardiovascular disease, the Partnership to Fight Chronic Disease joined with several health advocacy organizations to create the fair.

People living with Type 2 diabetes are more than twice as likely to develop cardiovascular disease. Their life expectancy is seven to eight years shorter than those without diabetes.

The PFCD is an internationally recognized organization of patients, providers, community organizations, business and labor groups, and health policy experts committed to raising awareness of the leading cause of death, disability and rising health care costs - chronic disease, according to its website.

PFCD Director Ken Thorpe said the organization's focus on prevention and treatment of chronic diseases made its involvement in the event a must.

"Eighty-six percent of what we spend on health care is for chronically ill people," Thorpe said. "It's gone up radically - in 1985, it was 67 percent."

In that time, the number of people with diabetes has almost doubled, he said. He added, diabetes and obesity are on the same path.

"When you look at diabetes and the rising rates of obesity, they track each other one for one," he said.

Diabetes accounts for approximately $2.3 billion in spending each year in Missouri, including $321 million for Medicaid.

One in six adults in Missouri has diabetes, and 36 percent of the state's adults are pre-diabetic.

Jonathan Pak, a doctor of pharmacy, said he hoped to help raise awareness of the connections between the two conditions.

"When patients with Type 2 diabetes are made aware, almost all of them are willing to do something about it," Pak said.

Additionally, he said, patients with other incentives are more willing to change their lifestyles for their health.

"We're learning that they're more willing to do it for someone they love," Pak said. "The best motivation is innate - it comes from within."

Larry Mantle once lived in Jefferson City. The 71-year-old man made sweeping changes to his life after a heart attack. Nine years ago, Mantle said, he died in an ambulance on Interstate 70 while he was being rushed to a hospital. Doctors resuscitated him and eventually did bypasses on five of his blood vessels.

A smoker for 40 years, Mantle hasn't smoked since. He also gave up high-fat and fried foods. Mantle walks 3 miles a day.

"Doctors saved my life," Mantle said. "I made some real lifestyle changes."

By the time Carr's brother was diagnosed with diabetes, he was "not long for this world," Carr said.

One of his feet was amputated. Diabetes was affecting his vision and his organs. Every health system in his body, from his toes to the top of his head had issues, Carr said.

It's not too late for others, she said.

"If raising awareness helps," she said, "I'll be a cheerleader."