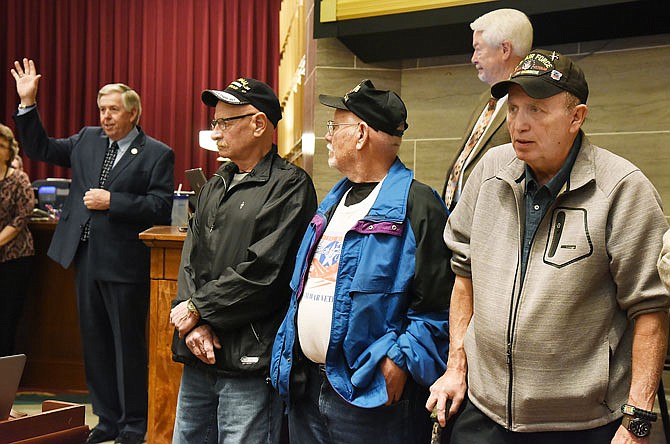 Lt. Gov. Mike Parson, background left, is recognized and thanked for his military service along with the more than 100 Vietnam veterans who made the trip to the Capitol on Thursday, including, from right, Ralph Simpson, Air Force; Joe Hoelscher, Army; and Bob Linnenbrink, Navy. The veterans were invited onto the floor of the Missouri House of Representatives to be recognized, one by one, and thanked for their service.

A last-minute flood of Missouri men and women committed to attending Missouri Vietnam Veterans Day on Thursday at the Capitol.

The surge in attendance doubled the original expectations - swelling the ranks of veterans to well over 130. Because many intended to bring family members, the recognition event was moved from the House Lounge to the House floor earlier in the week.

Their representatives introduced each veteran on the floor and presented them with proclamations, recognizing the veterans and the branches in which they served. State Rep. Mike Bernskoetter's office said many veterans arrived before the event Thursday morning, hoping to participate. Legislators also recognized the latecomers and planned to present them with proclamations after the House Printing Office could produce them. Some estimates put the turnout at 200.

In an address to the nurses, flyboys, soldiers and sailors, Speaker Todd Richardson, R-Poplar Bluff, said they were fathers, sons, brothers and sisters.

"But in the eyes of many - and certainly in the eyes of the members of this chamber - each and every one of you is known by a different title," Richardson said. "The title of 'hero.' Your actions, your courage, your sacrifice, your sense of duty to our nation are an inspiration to all of us."

They are reminders the United States has been blessed with "remarkable individuals" who answer the call to defend beliefs we hold dear, he said.

Some gave all they had to preserve our way of life, he said.

"The blanket of safety and of freedoms that we enjoy came at a heavy cost," Richardson said, "a cost you paid and a debt that we can never repay."

While soldiers were fighting the war, anti-war sentiment grew in the United States.

A cruel aspect of the war was the reception many soldiers were given when they returned home. They were often treated as criminals, addicts and war mongers. Soldiers returning to some communities were vilified.

Simpson said he kept his service secret from people he knew after he returned.

"I never told anybody I was in Vietnam for 20-25 years after I got back," Simpson said.

His children have always known, he said.

"I want to make my kids proud of me," he added.

Hoelscher said many veterans in Mid-Missouri came home and went right to work.

"I got home on a Friday and went to work on Monday," Hoelscher said.

He had a job waiting at Chesebrough-Pond's, he said.

But other veterans weren't so lucky. They didn't have anything to come back to, Hoelscher said.

A Navy veteran, Linnenbrink is now retired but stays involved with Honor Flight, which takes veterans to Washington, D.C., to visit memorials dedicated to their service and sacrifices.

"I think every vet should go on an honor flight," he said.

During the ceremony, legislators honored Pat Conway, D-St. Joseph, for his role in establishing the annual celebration of Vietnam veterans. Conway, himself a Vietnam veteran who is now in his last year in the House, had never asked for recognition for his service, legislators said.

About six or seven years ago, Conway said, he and former state Rep. Paul Fitzwater, R-Potosi, who also is a Vietnam veteran, both filed the bill to create Vietnam Veterans Day.

"That first year, Fitz had two people and I had three," Conway said. "It's grown every year since."

His priority has always been to establish a method for honoring Vietnam veterans and treating them with respect and dignity, he said.

He added several of the five veterans who attended the first ceremony the House held five years ago have died from illnesses associated with Agent Orange - a carcinogenic chemical herbicide the United States used in jungles in Vietnam. The chemical has been associated with numerous fatal illnesses.

Shortly after the ceremonies concluded in the Capitol, a few blocks down the street, six men stood in the rain in front of the main rostrum at Jefferson City National Cemetery, 1024 E. McCarty St. They said a prayer and held a wreath-laying ceremony to coincide with similar events being held at national cemeteries across the country.

Then discussion turned to the overburdened cemetery.

The cemetery was deemed "full" in 1969. Only about five burial plots remain, and they've been set aside for soldiers killed in action, according to Dan Phillips, a retired U.S. Air Force colonel with Jefferson Barracks National Cemetery in St. Louis.

The cemetery in St. Louis likely will be full in 2021.

The attention needed is going to have to be from a federal level, said Leon DeLong, a veteran from Jefferson City.

"We're in the early stages of making requests," he said. "We've got a lot of hurdles to go through."

But support is growing, Pete Adkins said. He said local lawmakers are coming onboard the effort to convince national lawmakers to find a way to finance expansion of national cemeteries.

"This need has come to the level it really requires attention," Phillips said. "There is an imminent need of burial spaces right now - not tomorrow, but right now."