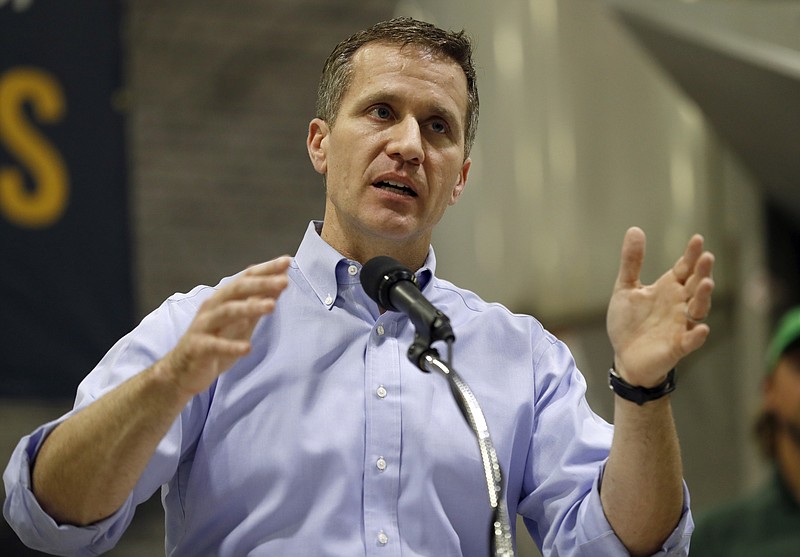 ST. LOUIS (AP) - A circuit judge Wednesday turned down Gov. Eric Greitens' request to move up his trial on a felony invasion of privacy charge.

Greitens was indicted in February on felony fourth-degree invasion of privacy for allegedly taking a partially nude photo of a woman while she was blindfolded, without her permission. Greitens has admitted to the affair in 2015, before he was elected, but denied criminal wrongdoing. He has declined to say if he took a photo.

Circuit Judge Rex Burlison on Wednesday turned down Greitens' request to move up the trial from May 14 to the first week of April, but did not rule on the governor's request for a bench trial. A hearing on that request is Monday. Circuit Attorney Kim Gardner, a Democrat, opposes the bench trial.

In a court filing this week, Greitens attorney James Martin cites concern about "finding jurors untainted by the negative press" against the governor.

Within hours of the indictment, Greitens said he was the victim of an investigation by a "reckless liberal prosecutor." Asking a judge to hear the case is, in effect, an extension of the political concern, said Cristian Stevens, a former assistant U.S. attorney who is now with the St. Louis law firm Armstrong Teasdale.

"The Greitens team has already identified this basically as a political prosecution," Stevens said. "Certainly, something to be a consideration is that you have a sitting Republican governor and a case that's going to be tried in what's generally considered the most liberal area of the state."

Greitens' attorneys may also believe the judge would be more adept in addressing two technical legal points they've raised. They contend that because the woman consented to the affair the photo
did not violate her privacy. They also said there is no evidence the photo was ever "transmitted." Without transmission, they said, the crime can be no more than a misdemeanor.

Mary Anne Franks, a University of Miami law professor specializing in privacy law who is advising Missouri lawmakers on the issue, said any photo taken without the woman's permission would be a violation of the intent of the law.

"Taken to its logical point, what they're arguing here is that any time you get undressed in front of any other person, it's perfectly acceptable for that person to take a photo of you," Franks said.

Peter Joy, a professor at Washington University School of Law in St. Louis, said both arguments would be difficult for a jury to ascertain.

"That sort of technical argument is something you might prefer to have a judge consider rather than a jury," Joy said.

At the hearing Wednesday, one of Greitens' attorneys, Jack Garvey, said it would be best for the state of Missouri to expedite the trial and move on.

"I think the court will agree this is an extraordinary case never seen before," Garvey said.

However, Gardner opposed the earlier date, as did Scott Simpson, the attorney for the woman who was involved with Greitens. Simpson said the woman works full-time, goes to school and is a mother. Moving up the trial "would impose a hardship on her," Simpson said.

Prosecutors have said the investigation was already rushed because the statute of limitations was about to expire. They've said in court they do not have possession of the compromising photo, but it's unclear if they're still pursuing it or will be able to get it. A spokeswoman for the circuit attorney's office, Susan Ryan, declined to discuss the investigation.

"The Greitens team likely looks at this and feels that they (prosecutors) haven't completed their investigation," Stevens said. "So obviously, the earlier the trial date, probably the better for the Greitens team."