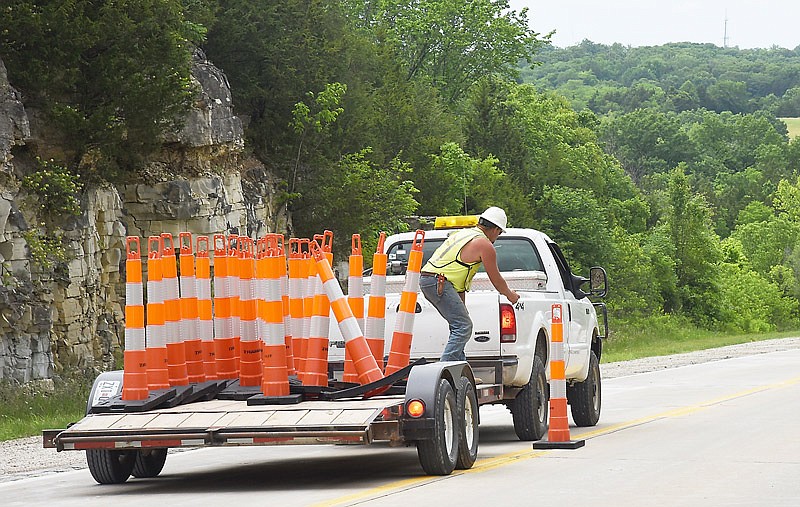 This May 22, 2017 file photo shows a construction crew worker reaching for a traffic cone during work on a Mid-Missouri highway.

But the proposed increase is far from a done deal, since it was added to a 420-page bill that makes numerous changes to the ways state government gets its revenues - and still must win the Senate's final approval.

Senators spent about 2 hours Monday on Sen. Bill Eigel's bill before setting it aside and ending the day's business - with most of the first 90 minutes involving a detailed discussion of its various provisions, between Eigel, R-Weldon Spring, and Sen. Jill Schupp, D-Creve Coeur.

The main point of his bill is speeding up the state's plan to reduce income taxes.

Under the current law, passed several years ago over then-Gov. Jay Nixon's veto, the income tax is to be reduced in steps from a top rate of 6 percent on all taxable income over $9,000, to 5.5 percent - and the first one-tenth percent reduction kicked in this year.

But Eigel's bill would cut the top tax rate to 5.25 percent for all taxable income over $8,000, over a four-year period starting next year.

And there would be an additional three-tenths percent cut in the top rate if the U.S. Supreme Court overturns its 1992 decision prohibiting states from requiring out-of-state businesses to pay sales and use taxes, unless that business had a physical presence in the state - or the U.S. Congress passes a law or the U.S. Constitution is amended, to allow the state to require out-of-state sellers with no physical presence in the state to collect and remit state and local sales taxes.

"The cumulative effect of the cuts and the revenue balancers creates a reasonable, thoughtful solution on how to reduce the tax burden on Missouri taxpayers, without creating a vulnerable situation with respect to our state budget needs," Eigel said. "(This would be) the largest overall tax cut in the history of Missouri."

Senators rejected an amendment proposed by Scott Sifton, D-Affton, to delay the impact of Eigel's bill until after the previous tax cuts have gone into effect.

For a long time, Eigel has opposed increasing revenues for the state's transportation system, without reducing spending in other areas.

"Since I arrived in the Missouri Senate less than 16 months ago, I have been the most vocal opponent of any increase in the state fuel tax," he reminded colleagues as he explained his bill. "I have repeatedly pointed out the irresponsibility of raising taxes when Missourians are already paying record amounts of money to Jefferson City."

And he reminded lawmakers that voters as recently as 2014 rejected a sales tax increase that would have provided additional money for transportation.

Still, he said, "except for K-12 education, I have long felt that making sure we take care of our roads is the most important priority in the state."

So, as a compromise with supporters of a fuels tax increase, his bill included a 6-cents-per-gallon boost, phased-in over three years.

But Sen. Dave Schatz, R-Sullivan, argued that increase isn't enough - and his amendment added two more 2-cent increases and also "would provide for a CPI (consumer price increase adjustment) at the end of year five."

Missouri's current fuels tax is 17 cents per-gallon - and has been at that level since 1996.

Schatz said if lawmakers 20 years ago had added an inflation factor then, "we wouldn't be having this discussion."

Schatz reminded Sen. Doug Libla, R-Poplar Bluff - who sponsored a fuels tax increase bill two years ago that cleared the Senate but not the House - "about 40 percent (of the tax) is going to be paid by people who do not live in Missouri," but buy fuel as they travel across the state.

"They're traveling through Missouri at a discount," he said.

Libla noted, as an example, that people who travel to Pennsylvania to visit Hershey or the Gettysburg Civil War battlefield are "paying over 50-cents a gallon" in fuel taxes to that state.

Schatz's amendment was approved on a voice vote.

Among its other provisions, Eigel's bill would keep the state's low-income housing tax credit, but limit the credits to $135 million a year.

"Taxpayers will benefit because they will issue $35 million less in credits each year," he told colleagues, "and those savings will act as yet another revenue balancer for the income tax (relief) called for" in the bill.