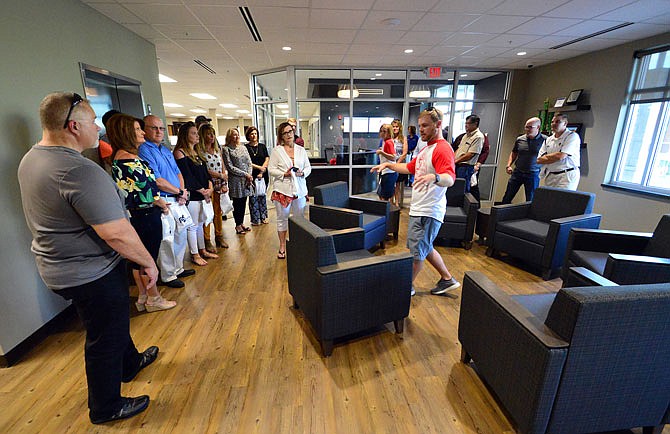 PFSbrands employees give guided campus tours Friday during the company's corporate office grand opening in Holts Summit. The employee-owned company has plans to add 100-plus more jobs by 2025.

While celebrating its 20th anniversary, Holts Summit-based company PFSbrands held the grand opening of its new corporate office Friday on its local campus.

CEO Shawn Burcham and his wife, Julie, started PFSbrands, originally called Pro Food Systems, in 1998 as a coffee company based from their garage in Willard. The duo launched the company's flagship Champs Chicken brand the next year. Today, PFSbrands has expanded to 38 states with its brands in about 1,300 locations.

To commemorate the anniversary, PFSbrands invited people from around the area for a ribbon cutting of the new office and a celebration. A flag which had been flown over the U.S. Capitol building on July 13 was presented to PFSbrands on behalf of Sen. Roy Blunt. State Sen. Jeanie Riddle and Rep. Travis Fitzwater also spoke at the event to congratulate and thank Burcham and the company for the opportunities it brought to the area.

"This is how jobs are created; this is how you do it," Fitzwater said. "You have a home-grown guy and his wife grinding away 20 years ago at a garage in Missouri to create an incredible business."

The new 27,000-square-foot facility at the Holts Summit campus gives PFSbrands new room to expand, as the company has outgrown the office it built at the same time as its new distribution center in 2013.

"The reality of it is, we built the warehouse, so we still have a lot of room to grow with the distribution center, but (at) the corporate office, we were just busting at the seams," Burcham said. "We were just putting people doubled up in offices, and the infrastructure and the growth of the people were just a little bit quicker than we had anticipated, so there's good and bad that comes along with that."

Burcham said with the addition, PFSbrands will go from being at the limit with office space to around 20 percent capacity - creating room to potentially grow to 250-275 employees in the Holts Summit area. The company has around 70 local employees now, with the remainder of its 130 workers spread nationwide.

PFSbrands could fill the new facility in six to eight years, Burcham added, if growth expectations are met. He said he expects the company to continue the more than 10 percent annual growth it has maintained through its history.

"As we've grown, the city here of Holts Summit has been very good to us," Burcham said. "We're a big part of the community. We put new infrastructure in place out here, we have about a 12-acre campus out here now where we've got multiple buildings up. The city's just really good for us, and vice-versa, I think we're good for the city."

Burcham said he and his wife made the decision to move to Holts Summit in 1999, putting them closer to family and the second location of Champs Chicken in the city's Mosier's Market, which is still open today.

Starting as a coffee company in the family garage, Burcham said there was no intention at first of getting into the "chicken business." After starting Champs Chicken, the business grew quickly, Burcham added, eventually allowing the hiring of their first delivery driver.

"We really just kind of had a vision of creating a business in Missouri, providing some income for the family, and didn't really have an aspiration or a vision to grow the company to where it's at today," Burcham said.

The company would change its name to PFSbrands later on to improve its marketability as more brands, like the recently created BluTaco, were added.

In 2017, the decision was made to switch to an employee-owned company. Burcham said the idea started with a book he read called "The Great Game of Business" in 2011 which spoke of open-book management, improving culture and building employee engagement.

"Everybody has a stake in the outcome (of the company), so it drives better engagement," Burcham said. "So we spent a long time opening up the books, teaching people to think and act like owners, really working on our financial literacy. So just spent a lot of time on that, and ultimately we had a vision of going to employee ownership."

The choice also shows PFSbrands is planning to stay in Holts Summit in the long run, Burcham added, with the goal of continuing to grow.