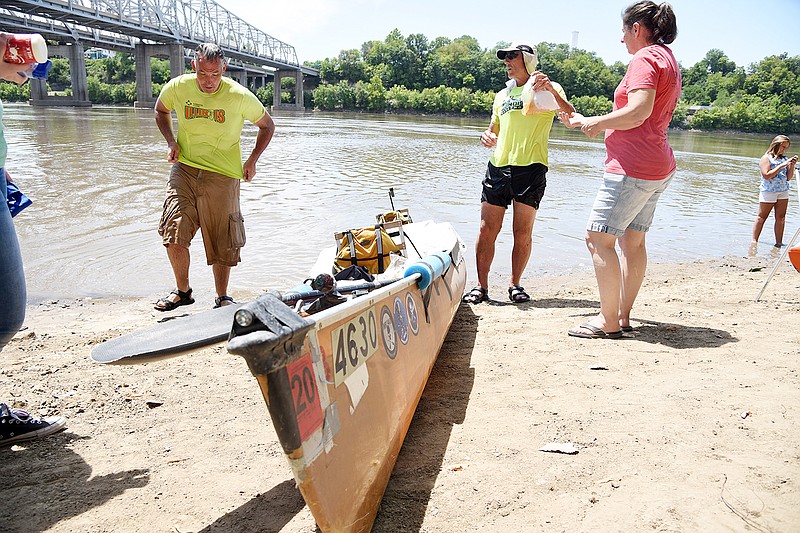 From left, Mark White and Drake White get their canoe on land as they are greeted by family for a quick break Wednesday before heading back out onto the Missouri River as a part of the MR340 at the Noren River Access.

Joe Wilson no longer presides over the Jefferson City checkpoint of the Missouri River 340 endurance race in body, but his spirit continues to influence the on-shore support network that makes it possible for people to propel themselves down the river from Kansas City to St. Charles in 88 hours or less.

Wilson - who died of cancer in 2016 at age 74 - was a community activist and conservationist who put in extensive work to improve the Jefferson City park on the north bank of the Missouri River around the Missouri Department of Conservation's Noren River Access boat ramp. His efforts led the city's Parks and Recreation Commission to change the park's name to Joe Wilson's Serenity Point at Noren Access in his honor less than six hours after his death.

The boat ramp and the shore nearby is home to one of the nine checkpoints of the annual MR340.

"He has a way of ensnaring you," Brent Haas remembered fondly of Wilson, who would keep the area around the boat ramp clear and work to get racers food and supplies.

As some of the lead racers arrived at the boat ramp Wednesday morning, Haas said he used to sit with Wilson through the night in what's now Serenity Point.

"It's kind of addicting," he said of being exposed to the passion of the river racers and their support crews on land. He did the race himself for the first time last year, and the experience gave him a new appreciation for the Jefferson City checkpoint - what he said many paddlers say is the best one of the MR340.

Sanka Hornecker helped Wilson run the checkpoint for two years then took over after he died. She said Missouri American Water will be completely in charge next year.

Hornecker said a lot of details go into supplying racers with the resources they need on shore at a checkpoint like Jefferson City's - firewood, hay, trash cans, hand sanitizer and even Tiki torches.

She noted local Boy Scouts were planning to come out Wednesday afternoon to help coordinate parking, as more racers start to arrive by water with their support crews via the road.

Haas said he might do the race again in the future, but he missed working the checkpoint last year. Missouri American Water also manages the exit site at St. Charles and has representatives in Kansas City and usually has a few employees each year who compete in the race, he added.

The MR340 is in its 13th year and has been listed as one of National Geographic's Top 100 American Adventures. Race proceeds benefit three environmental stewardship and education organizations: Missouri River Relief - which Wilson was involved in; the Healthy Rivers Partnership; and the Lewis and Clark Nature Center and Boathouse.

The Lewis and Clark Nature Center and Boathouse is the finish line at St. Charles, and Missouri American Water is funding free admission for visitors at the location through Friday. Race awards will be presented at 7 p.m. at the center and boathouse.

The News Tribune identified at least 19 Jefferson City-area individuals and tandem teams who registered for the MR340 this year, although not all of them actually started the race.