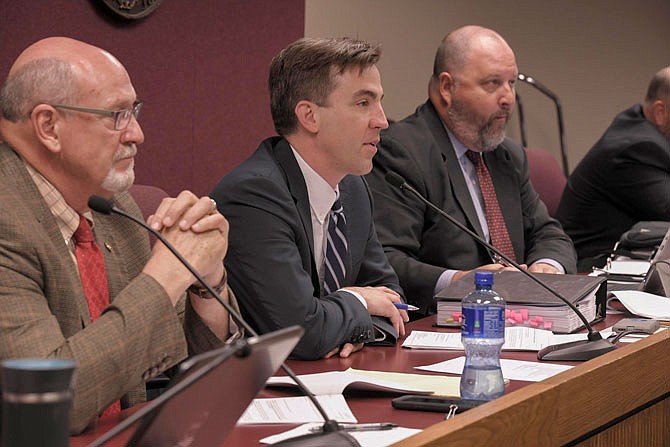 Rep. Jay Barnes, R-Jefferson City and chairman of the House Special Investigative Committee on Oversight, center, speaks May 29 during a committee hearing. Barnes said it was at this meeting that he learned then-Gov. Eric Greitens planned to announce his resignation.

EDITOR's NOTE: This story was changed at 3:25 p.m. Monday, July 16, 2018, to clarify that Rep. Barnes doesn't know if the House would have approved impeachment articles against now-former Gov. Eric Greitens, if the lieutenant governor had been a Democrat instead of a Republican.

Three years ago, state Rep. Jay Barnes introduced Eric Greitens at Jefferson City's Downtown Diner as "a man who, I think, could be the greatest conservative leader Missouri has ever had."

Last week, Barnes, R-Jefferson City and chairman of the House Special Investigative Committee on Oversight, filed a  24-page complaint with the Missouri Ethics Commission about the operations of the now-former governor's campaign committee, Greitens for Missouri, and of A New Missouri, the nonprofit organization created last year to support Greitens and his initiatives.

"In hindsight, I wish I had not been in the Downtown Diner in 2015, having done that," Barnes told the News Tribune last week, "but in February of this year when the committee was formed, (I had) to put those things behind me. And every member of the General Assembly, to some extent, would have the same problem (of) having had previous conversations or relationships with Mr. Greitens or anyone in his office."

Until last Thursday - except for one Mid-March news conference - Barnes has declined to comment since March 1 on the committee, its work and findings, his role in that work, and his thoughts about Greitens.

But he told the News Tribune that Greitens was "incredibly irresponsible" with actions he took 45 days ago - on June 1, his last day in office.

When Greitens resigned, Barnes said, "There was no sense of joy or vindication or anything, other than it was a sad day for the state of Missouri.

The details in the ethics complaint came from the work of the special House committee, which met numerous times between early March and the last week of May.

House Speaker Todd Richardson, R-Poplar Bluff, formed the committee in late February, just days after a St. Louis grand jury's Feb. 22 indictment of Greitens on a felony invasion of privacy charge - for taking a photograph of a woman with whom he was having an extramarital affair in the basement of his home in the city's Central West End while she was at least partially nude and in such a manner that the picture could have been shared with a computer.

When Richardson asked Barnes to chair the seven-member committee, Barnes recalled the House speaker told him: "This is the most important legislative committee that will be formed in this building in decades - the decades previous and the decades to come. How this committee conducts itself is going to be looked at by future General Assemblies."

Barnes, an attorney, said Richardson "absolutely" wanted a committee that would be as "a-political" as possible.

"It was that politics don't matter," Barnes said. "We're going to do what is right based on the testimony received and other facts that come to our attention, regardless of the politics of the situation."

Many saw the panel as the first step toward getting the House to impeach Greitens, but the committee wasn't given a charge to recommend for or against impeachment until the Legislature called itself into a special session - for the first time in state history - to consider impeachment or other discipline of the governor.

The committee ultimately never made a recommendation because Greitens resigned June 1.

The original committee was comprised of five Republicans and two Democrats, including three attorneys and two former law enforcement officers.

Barnes said last week that was a good mix.

"The speaker picked a committee of people who had enough experience - both in the Legislature and the real world - to put any partisanship aside," he explained. "This (was) an important job, and we (were) going to put politics and personal beliefs coming into it aside and listen to what witnesses have to say, review documents, and make determinations based on the facts that come before the committee."

Although the committee started by looking at the allegations involving what happened in Greitens' basement before he officially had launched his campaign for governor, it quickly determined there was more work to do.

"It wasn't long after the committee was formed that there was a story about The Mission Continues list," Barnes said.

The Mission Continues is the veterans service charity Greitens helped found in 2007, and he served as its chief executive officer until 2014 - when he stepped down to explore a possible political race that became his campaign for governor.

Greitens was accused of - and eventually charged with felony computer tampering for - taking donor and email lists from the charity without its permission and using that information to raise more than $2 million in the early stages of his campaign.

The House committee took testimony in mid-March from former Greitens campaign consultant Michael Hafner, who testified about conversations with several people "about concealing (the names of) donors and about (illegal) foreign contributions," Barnes said. "Those are pretty serious allegations, so that was the first clue.

"I think every member of the committee, at some point, came up to me separately and said, 'You know, we have to look at A New Missouri.'"

But, Barnes said last week, there were time constraints because the committee was working while all its members also were part of the General Assembly's regular session, with other committee hearings to attend and legislation to debate and vote on.

"There were so many things out there that we had to make sure that we kept our focus on the things that we knew we could get to the finish line," Barnes said. "We did the best we could, in a very short time frame, conducting an investigation that would take law enforcement agencies a much longer period of time to do.

"With the constraints that we had, we did the best that we could do to get to the bottom of allegations against Eric Greitens."

The panel was extended to 10 members - another Democrat and two more Republicans, including another attorney - for its work during the special session.

But, because of Greitens' resignation, Barnes and Richardson determined there was no more work it could do.

Mitten disagreed continuing to investigate the Greitens groups had no legislative purpose, she said after Barnes filed the ethics complaint last Tuesday, calling the decision to end the committee's work an "unfortunate political decision."

Barnes said there was no legislative purpose for a continuing probe because: "I think that A New Missouri, based on the facts that we have now, is an illegal enterprise from its inception. There aren't any laws that need to be changed for an investigation to happen."

He thinks the Ethics Commission can find violations from the information in his complaint that could result in fines.

"My focus was on what violates Missouri campaign finance laws," Barnes said. "There are other, potential criminal implications of the conduct, and that wasn't my focus.

"I think that there is more than enough there for state prosecutors to do a thorough investigation and to determine whether charges need to be filed - or not - even outside of the Missouri Ethics Commission."

Eventually, the House committee hired former Missouri Supreme Court Judge Edward D. "Chip" Robertson - who had been a part of the court when it convicted then-Secretary of State Judi Moriarty of impeachment charges in 1994 - and former Pettis County Prosecutor Mark Kempton as special counsel. They took no salary but were covered for expenses.

Barnes said they provided a "fresh set of eyes" to look at the evidence the committee was gathering while also representing the committee in a court case and in discussions with Greitens' lawyers.

As the committee was working, Greitens faced two different criminal charges in St. Louis. Both eventually were dismissed, with the computer tampering charge dropped after Greitens resigned in a deal originally proposed and arranged by Greitens' attorneys.

Still, as the committee was meeting, some wondered why it didn't wait for those charges to be resolved before looking into Greitens' legal situation.

Barnes said he had found that answer in a comment Speaker Richardson's father, then-Rep. Mark L. Richardson, R-Poplar Bluff, had made while serving on the House committee that had recommended impeachment charges against Moriarty, after she was convicted of mishandling paperwork for her son's candidacy, a misdemeanor crime.

Reading from the published record of the 1994 House impeachment hearings, Barnes said the senior Richardson had said: "I think our obligations here, under the Constitution (and) within this committee, is to make our own findings. I think the fact that (Moriarty) committed a crime does not necessarily make it impeachable, and the fact that she didn't commit a crime doesn't necessarily let her off the hook as far as whether she should be impeached.

"We ought to, at least, proceed based upon our own investigations and our own findings."

Barnes added: "That's the exact approach that we took" in the Greitens investigation.

He said the committee had not gotten any other advice from the speaker's father - who should not be confused with Mark A. Richardson, the current Cole County prosecutor, who also was hired to lead the prosecution of the impeachment charges against Moriarty in 1994.

Barnes learned during a May 29 committee hearing that Greitens was going to announce his plans to resign, but Barnes allowed the hearing to continue so it wouldn't create suspicion before the governor actually made the announcement.

"When a person resigns, it is their news to break," he said. "Even if we knew for sure that it would happen, I didn't want our committee to break early.

Greitens made a brief statement before a room full of cameras and reporters that Tuesday evening that he would leave office at 5 p.m. the following Friday.

While there was a benefit to Mike Parson having three days to prepare to succeed Greitens in the governor's office, "what (Greitens) did over the next three days was the most irresponsible thing he could have done," Barnes said.

"To sign 70 bills, two days after you get them, did a great disservice to this state," Barnes said, because there wasn't time to do the "extensive," thorough review process followed by previous governors of both parties "to make sure that there are not unintended consequences hidden in legislation."

He added: "The unbelievable selfishness of short-circuiting that process so that he could put his name on as many bills as possible is incredible.

"He was given the benefit of the doubt because Parson needed those three days."

Barnes hopes Parson's staff will review all the bills Greitens signed to make sure there were no mistakes - and to call lawmakers back for a special session if any mistakes are found.

Barnes rejects the idea that the committee might not have been formed - or worked as hard - if Greitens' lieutenant governor had been a Democrat instead of a fellow Republican.

"How we acted would not have been impacted by the party of the potential replacement," he said. "At the same time, you have to recognize it would have changed the dynamic for many members of the General Assembly and made life much more difficult."

While confident the House would have supported impeachment articles against Greitens, with Republican Mike Parson as lieutenant governor, Barnes is not sure the majority of Republicans in the Legislature - who hold a supermajority in both houses - would have supported any impeachment resolutions had his committee reached the conclusion they were needed, and the lieutenant governor was a Democrat instead of a Republican.

Overall, Barnes said, Missourians should remember "the seriousness of purpose with which seven Missourians - of different backgrounds and political affiliations - were able to come together to unanimously agree on a set of facts and conduct themselves in a manner that the people of Missouri can appreciate."