Diabetic middle schoolers welcome newcomer to their 'band of brothers' 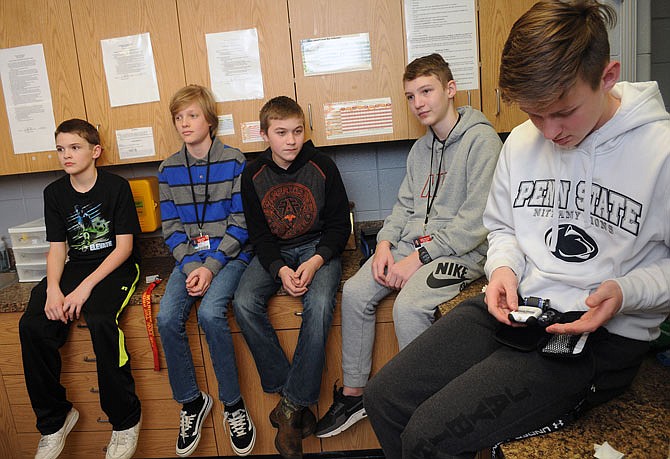 Lewis and Clark Middle School student Will Berendzen, right, uses a glucose meter Friday as fellow diabetic classmates look on. From left, Trevor Johnson, Logan Chandler, Brycen Miller, Rylee Holmes and Berendzen made a pact to get together every day to give themselves insulin, calling themselves a "band of brothers."

They joked and laughed with each other as one of them, 14-year-old Logan Chandler, began to understand the strength of the support group they offered - their "band of brothers."

It was Chandler's first day back from school after a winter break, in which he'd been diagnosed with Type 1 diabetes.

He and his brother, Hunter, were among four Jefferson City Public Schools students diagnosed with the condition during the break. Unfortunately, Hunter didn't survive.

Type 1 diabetes, sometimes called juvenile or insulin-dependent diabetes, occurs when the pancreas produces little or no insulin and often develops around age 14. However, it can develop at any age. In Type 2 diabetes, which accounts for about 95 percent of diabetes cases, a person's body is unable to use insulin efficiently.

In the nurse's office, the five boys test their blood-sugar levels and sometimes race to see who can calculate the number of carbohydrates in their meals.

Berendzen quickly had the calculation for his pizza and vegetables. He knew what his score was going to be before the race started.

"It's really wasn't fair," he said, "because I eat the same thing every day."

Once they determined how much insulin they needed, the boys administered their doses to themselves, Berendzen using a pen and Miller a pump.

"I usually have like three to four visits (to the nurse's office) a day," Miller said. "It's like a routine for you."

He stops in the room at 9 a.m. every day. Some days, when he has breakfast at school, he stops in even earlier.

Thirteen-year-old Rylee Holmes said the different devices hold different amounts of insulin. Some devices can hold up to 120 units of insulin. A unit can remove 12-15 grams of carbohydrates from a human body. Holmes, who uses a pump, said the only downside to the device is changing the batteries.

The youngest of the group, 12-year-old Trevor Johnson, sat against a wall in the nurse's office, laughing with the other boys and eating his lunch.

"My pet peeve is people telling me I can't eat candy," Berendzen said.

He said he can eat almost anything he wants, so long as he does the math and takes a corresponding amount of insulin.

Miller is the veteran of the group, having received the diagnosis when he was 7.

A spike in the number of diagnoses of Type 1 diabetes around January is not unusual, said Dr. Bert Bachrach, head of the Pediatric Diabetes Program at the University of Missouri, which treats all five of the Lewis and Clark boys.

Bachrach's colleagues told him there were 12 diagnoses in Springfield over the past month.

"You do see a lot of seasonal diagnoses," he said. "Oftentimes, it's been going on for years, but an illness tips it over."

Although beta cells (the cells in a pancreas that create insulin) might have been failing for months or years, a patient could have about 20 percent of their healthy cells that continue to work, he explained.

Watch for somebody urinating often, yet remaining thirsty. As blood sugar goes higher, the body tries to remove it through urine. The patient begins to lose calories and eat more. They still lose weight.

Berendzen's mother, Amy Berendzen, is the school district's director of community relations. She said Will was diagnosed with Type 1 diabetes in December 2016, when he was 13.

"The scary thing about Type 1 diabetes is that it's quiet," she said. "Kids all present similar but not necessarily the same symptoms."

Some of the symptoms can seem like the normal teenager condition: hunger, weight loss, mood swings. Nausea or vomiting also can mimic the flu.

Will's symptoms were not abnormal for the condition - frequent urination, extreme fatigue, excessive thirst and weight loss. He was growing skinny.

"He was eating all the time but not gaining any weight," Amy said. "The nurse practitioner checked his blood sugar, and our whole world changed."

Normally, depending on the time of day and how long it has been since a person's last meal, a blood sugar or blood-glucose level should be 70-140 milligrams of glucose per deciliter of blood (mg/dl).

The higher number is expected a few hours after eating.

Each of the four boys diagnosed in December had readings over 700 mg/dl.

"(Symptoms) this time of year can present like the flu or another virus," Amy said. It concerns her that four boys from one community can receive the diagnosis in such a short period of time, she added.

Chandler said his brother had been very ill, although he wasn't. Doctors checked his blood sugar after realizing Hunter was gravely ill.

About 1.25 million Americans have Type 1 diabetes, according to the American Diabetes Association. Of those, it is estimated about 200,000 are juveniles.

"Every diabetic has a different plan (for managing the condition)," Martin said. "It can really add up. With the number of health room visits we spend with diabetics, we really get to know them well."

Two of the boys bring their breakfast trays in every morning so Martin can count the carbohydrates they are about to eat and determine how much insulin they need.

"They are checking their blood-sugar levels," she said. "They poke their finger, and we check."

Students return at 9 a.m. and before lunch. They check at P.E. and before they get on a bus to go home.

Each time Will eats anything, he needs to go to see the nurse and check his blood sugar, Martin said. It's a life change.

The MU Pediatric Diabetes Program has a school for families of patients diagnosed with Type 1 diabetes.

"We find this is a big adjustment for families," Bachrach said.

He said when people are diagnosed, they go through a series of feelings anger, denial, grievances with God and others, before accepting the situation.

Families go to the clinic and speak to dietitians, educators and social workers. They learn to monitor glucose and give injections.

"We give two (insulin) shots a day," he said. "This is an intensive program."

A goal, he said, was making sure every family is prepared for the changes to their lives.

It's scary for parents.

"When a patient's diagnosed, we're almost sending them home with a brand new baby," Bachrach said. "You're learning something new. You have to sort this out."

Berendzen said she can't remember what their life was like just a year ago - pre-diagnosis.

"What's weird about it is it's now normal for us," she said.

Normal now means holding fundraisers for and being spokespersons about diabetes awareness.

Will has done a terrific job managing his disease, she said; he's never asked "Why me?"

Other diabetic students at Lewis and Clark Middle School have been Will's "band of brothers," she added.

One of the boys diagnosed this winter was expected to return to school soon. Berendzen said they would be welcoming another to their band.

"The doctor told (Will) the only three things he can't do are drive an 18-wheeler, fly a plane or join the Armed Forces," Berendzen said. "He will use this diagnosis to better himself. We won't let it define him."