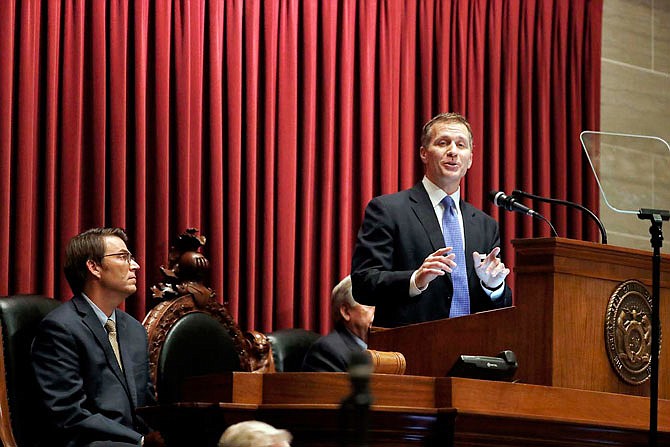 Speaker of the House Todd Richardson, left, listens as Gov. Eric Greitens delivers the annual State of the State address Wednesday to a joint session of the House and Senate.

JEFFERSON CITY, Mo. (AP) -- Missouri Gov. Eric Greitens appeared to remain in the good graces of some Republicans Friday as he sought forgiveness and a political path forward following his admission of an extramarital affair.

Though expressing disappointment about the affair and concern about some of the more lurid allegations that Greitens has denied, some Republican voters and party officials said their support for Greitens had not been shaken.

Vince Harris, from the small town of Trenton, northeast of Kansas City, took to Greitens' Facebook page to defend him against commenters who labeled the governor a hypocrite for campaigning on family values in 2016 though he had cheated on his wife in 2015.

To say public officials should be held to a higher standard is "a little bit silly," Harris told The Associated Press.

"Regardless of the office that's being held, the person holding it is still a human being who has the same faults and vulnerabilities that we do. They're going to make the same mistakes. They're going to make some of the same goofs," Harris added. "And I think to say that that impairs their ability to lead or to do their job, I think is just incorrect."

Lawmakers at the Missouri Capitol are wrestling with the same question of whether Greitens can effectively carry out his agenda. Just hours before St. Louis television station KMOV broke news of the affair Wednesday night, Greitens had announced in his State of the State address that he would be unveiling the "boldest state tax reform in America" next week.

On Friday, his office declined to comment on whether that still would occur.

Some Democratic lawmakers have called for Greitens to resign. Other Republicans and Democrats have said they want an investigation, which the St. Louis circuit attorney has launched. But still other Republicans appear ready to forgive.

State Sen. Ed Emery said Greitens called him Friday to apologize for the affair and ask for forgiveness. Emery said he was "amazed at the character" of both Greitens and his wife, Sheena, for working through the difficult situation.

"I made sure the governor knew that I understood the kind of pressure that men were under .... that I've prayed for him and will continue to pray for him," Emery said.

Greitens has acknowledged being "unfaithful" in his marriage, but his attorney has denied allegations contained in a recorded conversation between the woman and her ex-husband that Grietens coerced the women to remain silent by taking a photo of her with her pants down.

The AP and other media have not released the identity of either the woman or her ex-husband.

A law firm representing the woman released a statement Friday saying her ex-husband had "betrayed her confidence" by secretly recording their conversation. The statement, which did not name the woman, asked the media to respect her privacy. It neither confirmed nor denied her comments on the recording.

"She is saddened that during this time of national introspection on the treatment of women in society, allegations about her private life have been published without her permission," said the statement by the Knight & Simpson law firm in St. Charles.

Attorney Albert Watkins, who represents the ex-husband, subsequently released a statement noting that spouses, children and friends are also victims.

"Our client has no interest in Governor Greitens, his political aspirations, or his future. Our client seeks nothing more than the exposure of the truth" so that "all who have been used and victimized" can "commence the healing process," Watkins said.

Henry Dienst, the Clark County Republican chairman, said he would continue to support Greitens even if he attempted to blackmail the woman with a photo because Greitens has helped Missouri's economy.

Holly Lintner, of Jackson, south of St. Louis, said she also is sticking with Greitens.

"At this point, I still choose to believe what the governor's telling us," said Lintner, a former Republican chairwoman in Cape Girardeau County. "Affairs are never good, but people are imperfect and they make mistakes."

Republican political consultant James Harris said it's important for Greitens to tell his supporters both what's true about his affair and what's not.

"I think most people want to forgive," James Harris said. But he added, "It's more challenging when you are a public official to go through that process."