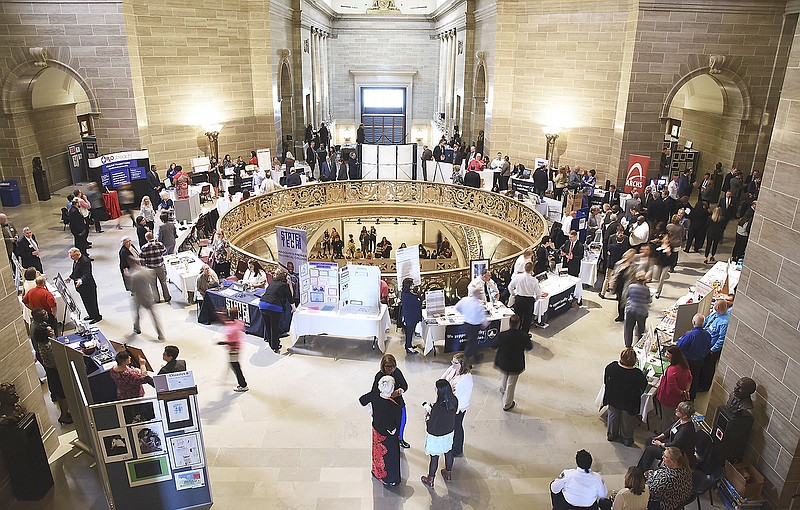 Tuesday was Corrections Day in the third floor Rotunda in the Capitol, and several vendors who work closely with the Department of Corrections and different divisions of DOC had representatives on hand to explain options and opportunities.

The Missouri Department of Corrections on Tuesday showcased some of the positive things it is doing to make the state safe and have prisoners return to communities as productive citizens.

"In the past year, we've been changing not only the narrative about our department but also the culture in our department," Corrections Director Anne Precythe said. "By having Corrections Day at the (state) Capitol, we highlighted the great things our employees do and showed just how diverse our work is."

One story shared Tuesday was of Tracy and Shirleen Dieleman, who hired former prisoner Robert Bush. When Bush applied to work for the Dielemans, he said he had spent a quarter of a century running the particular type of printing press they operate in their North Kansas City business. The couple said in their labor market, workers adept at producing labels and stickers on hot stamp presses were few and far between, so they hired him immediately.

Bush had worked on perfecting print processes while incarcerated in DOC facilities, running hot stamp presses in on-site Missouri Vocational Enterprises factories. From the start of his sentence, Bush said he was thinking about the future - how he would support himself after his release. "You can't just walk out the door without a plan," he said.

Now the work has paid off for Bush and the Dielemans.

"We just clicked because he knew what we wanted from him, and he was bound and determined to give it to us," Shirleen Dieleman said. "If you give them a second chance, it could be great. It was for us."

Another former prisoner is upholsterer Mike Smith, who credited people he met while in prison with getting him onto the path to becoming a successful business owner.

Smith spent 18 years in prison, but while working in the MVE chair factory at Tipton Correctional Center, he found himself drawn to furniture repair.

"You take something old and not any good, and when you get through with it, it's brand new," he said.

Factory manager Steven Martin gave Smith a chance in the re-upholstery unit, and it was there Smith honed the skills that would shape his career.

After his release, his parole officer helped him find a construction job. Then, Smith said, his entrepreneurial spirit took over. Noticing the forklift seats at the construction site needed repairing, Smith offered to take one home and fix it. Smith's boss hired him to re-upholster all the seats - and recommended him to other clients.

­­Corrections officials said 96 percent of people who enter the Missouri prison system ultimately are released into communities. They noted employment reduces the recidivism rate from 69 percent to 23 percent.

Every year, nearly 20,000 people are released from Missouri prisons. In 2017, Corrections officials supervised 58,000 Missourians on probation or parole and partnered with dozens of community groups in addressing employment, housing and treatment issues.