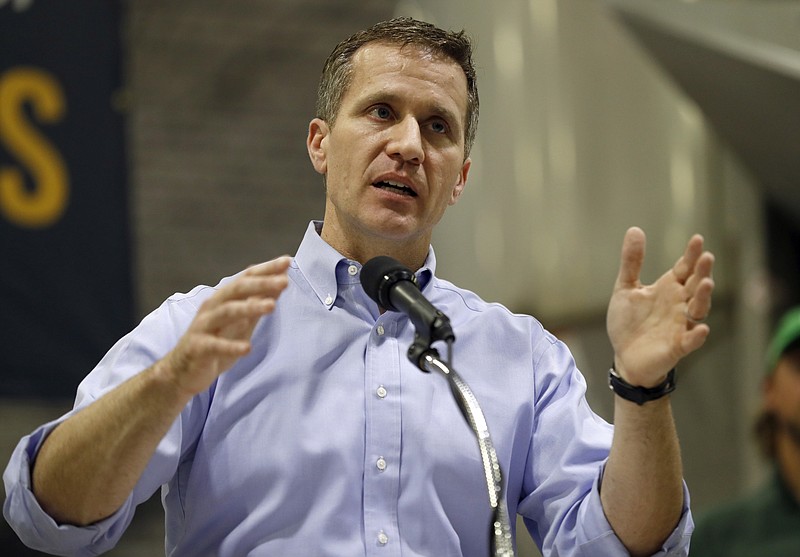 The St. Louis prosecutor's office said Tuesday that it has hired a Michigan firm to aid its investigation into Gov. Eric Greitens to try to ensure the probe remains independent.

Documents filed in court show St. Louis Circuit Attorney Kim Gardner hired Enterra LLC of Rochester Hills, Michigan, to help with an investigation of the Republican governor that was prompted by his recent acknowledgment of an extramarital affair in 2015.

A grand jury indicted Greitens on a felony charge of invasion of privacy Thursday. He's accused of taking a partially nude photo of the woman without her consent and transmitting it to a computer. Greitens has declined to publicly say whether he took the photo, but his attorneys have said he is innocent of the criminal charge.

A trial has been tentatively set for May 14. The investigation is continuing.

Greitens' attorney, Edward L. Dowd Jr., on Tuesday questioned why Gardner's office is using out-of-state investigators instead of local police and said Greitens had hoped for an even sooner trial date to clear his name.

"The damage to this guy that's being done every day is absurd," Dowd said of Greitens.

Gardner spokeswoman Susan Ryan said the office first asked St. Louis police for help but was directed to the FBI, which in turn said the investigation was out of its jurisdiction.

"So we hired a company that had the expertise we were looking for and that also did not have any relationships in the state of Missouri, because we wanted this to remain as independent as possible," Ryan said.

Dowd said he obtained the circuit attorney's contract with Enterra through an open records request. The contract, which Dowd filed as a court exhibit, shows Enterra was to be paid a $10,000 retainer, with its employees paid at a rate of $250 an hour plus reimbursement for "reasonable expenses."

The agreement states the investigative company would report directly to Gardner "either orally, or if requested, in written form."

Dowd, a former U.S. attorney who also worked on the Branch Davidian investigation in Waco, Texas, said he's never seen a situation in which a criminal case report was not in writing.

"It's more indication of how unusual this whole thing is," Dowd said.

Ryan said she didn't know how much money had been paid to the company so far. She also wasn't sure about the manner in which the firm submitted its findings.

Washington University law professor Peter Joy said hiring a private firm to help in an investigation is not uncommon when prosecutors are understaffed and under tight deadlines. In the Greitens investigation, the three-year statute of limitations for invasion of privacy would have expired in March.

"When you are kind of under the gun, hiring outside help would be something you'd do," Joy said.

He also said it's not unusual for prosecutors and defense attorneys to ask for oral reports and not written ones, but it depends on the general practice of the office. He added the case is moving "really quickly" for a felony punishable by at most four years in prison.

Gardner's office submitted a court filing Tuesday listing evidence it was supplying to Greitens' defense team, including a photo of the woman and emails between Greitens and the woman. Dowd said the photo was "a publicly posted professional headshot" - not the compromising photo the indictment alleges Greitens took.

Dowd, in court filings and in an interview, reiterated his belief Missouri's invasion of privacy statute applies to voyeurs and not encounters involving consenting adults, even if the woman didn't know she was being photographed. She told her ex-husband in a conversation he secretly recorded that she was partially nude and blindfolded while in the basement of Greitens' home when he took the picture, threatening to use it as blackmail if she ever spoke of the affair.

"When you take your clothes off, you cannot expect not to be viewed in whatever place you're in, especially in somebody else's house," Dowd said.

Print Headline: Use of private firm &#0010;for Greitens investigation questioned