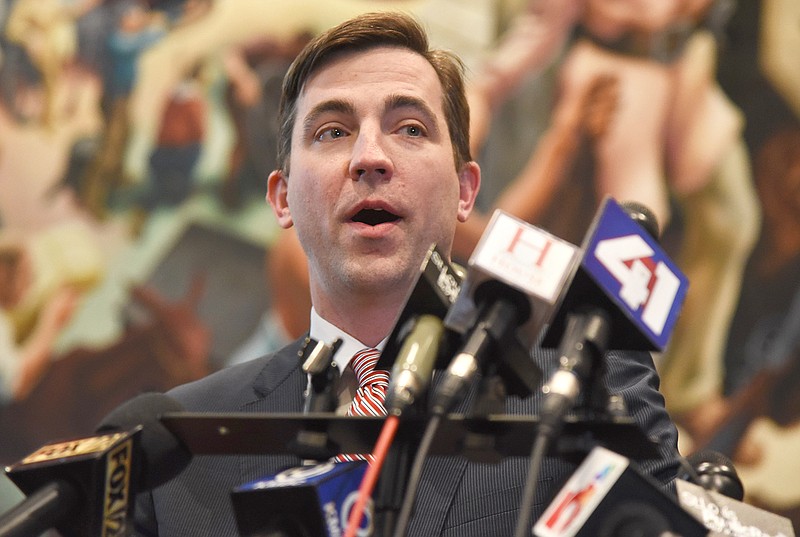 Republican Rep. Jay Barnes addresses reporters Monday, Feb. 26, 2018 during a press conference in the House Lounge of the Missouri Capitol.

Missouri House leadership announced Monday it has formed a committee to look into the facts surrounding last week's indictment of Gov. Eric Greitens.

"This committee's task is going to be to investigate facts," Barnes said Monday. "We're going to do it in a way that's fair, thorough and timely."

A grand jury in St. Louis indicted Greitens on a felony charge of invasion of privacy last Thursday. He's accused of taking a compromising photo of a woman without her permission. Greitens has admitted he and the woman were involved in an affair in 2015. Greitens has denied blackmailing the woman and has not answered questions about whether he took a photo.

"We will produce a report, and we will make determinations based on where the facts lead us," Barnes said.

The committee will determine whether to initiate impeachment proceedings against the governor.

The committee does not have a time frame for completing its investigation, Barnes said. However, he added, it will try to complete its work as soon as possible.

When asked if the committee would have subpoena power, House Speaker Todd Richardson, R-Poplar Bluff, said the committee will have use of every power available for the investigation.

The House committee's work will be separate from the criminal proceedings in St. Louis Circuit Court. In court Monday, St. Louis prosecutors told a judge that investigation could broaden to include matters beyond the allegations of invasion of privacy, the Associated Press reported.

Circuit Judge Rex Burlison set a tentative trial date of May 14, but a spokeswoman for St. Louis Circuit Attorney Kim Gardner said the office will continue to push for a later trial, according to the AP.

Greitens' attorneys have requested the indictment be dismissed.

Richardson said the House investigation would not interfere with the work representatives are trying to complete. He said the tasks required of the General Assembly would remain their priority.

However, state Rep. Marsha Haefner, R-St. Louis, said the controversy already is interfering with legislators' trying to complete their work.

She and state Rep. Shamed Dogan, R-Ballwin, held a news conference in the House Lounge, in front of about 75 members of media and staff, immediately following the announcement of the committee's formation.

Dogan read from a statement, "The governor appears to have lied to the people of the state of Missouri when he said in January that he had not taken a photograph of a woman who was undressed, blindfolded and bound."

Dogan said it's hard to see how Greitens can be an effective governor or how he can lead the Republican party while facing a criminal case.

In Missouri, it's illegal to knowingly photograph or film a person who is nude or semi-nude in a place where they should have a "reasonable expectation" of privacy, without their consent, then distributing or transmitting the images in a way that allows computer access.

Greitens' attorneys have argued the law doesn't apply in his case because it does not apply to adults engaging in consensual sexual activity.

Haefner and Dogan said about a dozen Republican lawmakers have signed a letter calling on the governor to resign.

"I think the fact that we're all here talking about this instead of performing in the Legislature today verifies that this is a huge distraction from the work that needs to be done," Haefner said. "This has been the main story for five or six weeks now."

She had previously called on the governor to resign.

Dogan said he had not called for a resignation previously, but when Greitens publicly "stopped asserting there was no photograph," it indicated to him there probably was a photo.

As for the argument that once people are in a home engaged in a sexual relationship and somebody takes a photograph of the partner undressed and bound, Dogan said, "That just sickened me."

He said the governor is no longer an effective leader for the state or party.

"Running on family values and integrity," she said, "only to find out that those were just words - not who he is."

The Associated Press contributed information used in this article.