Communities evaluate how to protect schools after latest school shooting 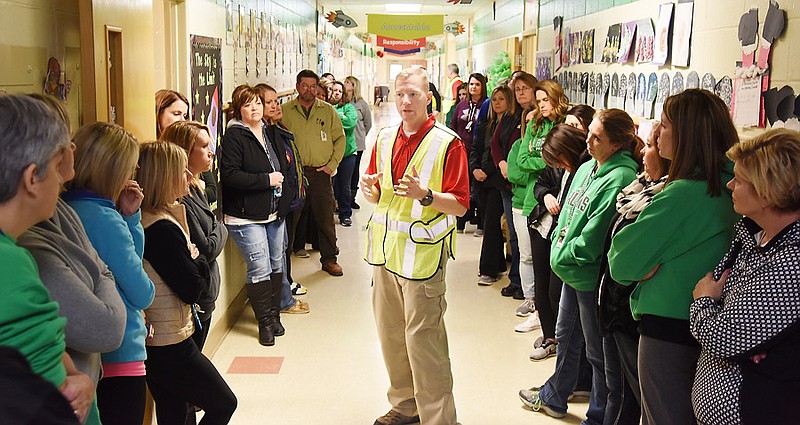 Bret Brooks of Gray Ram Tactical LLC (in safety vest) goes over several points after an intruder training presentation to teachers in January at each of the schools in the Blair Oaks School District.

The chambers of the revolving conversation about how best to protect schools from mass murderers who use firearms to kill have been loaded and spun again after the latest school massacre - this one at Marjory Stoneman Douglas High School in Parkland, Florida, on Feb. 14.

The Ashland Police Department decided to put off-duty officers in local schools to support the Boone County Sheriff's Department school resource officer in their local district, according to local reports.

The Iberia R-5 Board of Education in Miller County is seeking public input from residents on whether to allow teachers to become certified to carry concealed weapons on school grounds.

President Donald Trump after the Parkland shooting has publicly endorsed arming teachers and suggested teachers should receive bonuses for the added responsibility, according to the Associated Press.

The National Education Association and American Federation of Teachers labor unions and the National Association of School Resource Officers do not support this idea.

NASRO instead recommends federal, state and local governments secure funding to put at least one school resource officer in every school in the country.

"I do support the Missouri law now that does allow school teachers to be trained and to carry guns if they want to and the school district thinks that is good policy," U.S. Rep. Vicky Hartzler, R-Harrisonville, told the News Tribune last week.

The act would change federal law to allow off-duty and qualified retired law enforcement officers to carry a concealed firearm in a school zone.

She said her bill passed the House of Representatives as part of a "concealed carry reciprocity act" and now is in the U.S. Senate. The Senate Judiciary Committee might pass the bill again as a standalone in May during Law Enforcement Appreciation Week, she explained.

"As I've visited with the schools and several superintendents in my district, it seemed to be the ones in the rural areas that were more open to it and saying, 'Absolutely, we would take advantage of this if you could pass this law,' because they're so far from the sheriff's department. Many of our schools are a half-hour away, even if they call 911. If there was a shooter, it could take up to half an hour for someone to get there," Hartzler said.

Capt. Aaron Bollinger of the Cole County Sheriff's Department said three school districts in the county have SROs already through the Sheriff's Office - Blair Oaks, Cole R-1 (Russellville) and Cole R-5 (Eugene). Those deputies split their time between multiple buildings at each district.

Bollinger added the department has access to a reserve of about eight to 10 volunteers who are retired officers or still hold their commissions from the sheriff but have other full-time jobs. Reserve volunteers have worked the Cole County Fair, for example.

His thoughts on arming teachers are mixed.

"As long as they have a reasonable amount of training, I think it'd be beneficial," he said. However, he cautioned as a law enforcement officer that "what you don't want is another gun you have to worry about."

"We've had the discussion, but I don't know that that's the proper fit," Russellville's Superintendent Perry Gorrell said of arming teachers. "My grandfather said never bring anything to a fight you don't want used on yourself."

NASRO cited law enforcement officers who respond to schools could mistake un-uniformed, armed teachers for assailants, and "discharging a firearm in a crowded school is an extremely risky action" that less-than-extensively-trained people could decide to do rather than hold fire.

Bret Brooks - who works for Higginsville-based consulting firm Gray Ram Tactical, which carries out active shooter training for schools - said asking most people without law enforcement expertise to be responsible for weapons generally would not be effective.

Gray Ram hosted a training at Blair Oaks last month, where Bret and his wife, Dawn, have a son and daughter as students in the district.

"The average concealed carry class does not even come close to replicating the firearm training that a police officer goes through," Brooks said.

People who aren't experts in law enforcement or the military simply won't have the experience they need to deal with the nuances of carrying a firearm, he explained - being able to evaluate when to use it, knowing the rules on use of force, and training for how to deal with stress while making those tactical evaluations.

He said adding more firearms around untrained co-workers could add a layer of safety and security risks - let alone ones that stem from teachers' day-to-day interactions with students.

Brooks added communities might be missing something, too, in not having conversations beyond SROs, whether to arm teachers and what physical security measures can be put in place at schools.

He said the points of discussion after mass murders involving guns have been gun control or mental illness, but he encourages people to step back and look at society more broadly - the media we consume, the role of technology in social isolation and social norms that might contribute to violent behavior. Leaders of national medical organizations have said access to firearms does matter, though, especially when it comes to the extent of the injuries victims receive.

Even so, academic research and journalistic reports identify gun violence often is at a complex nexus of multiple factors that include firearm access and people with motivation to kill - an intersectional spot in the crosshairs that the country keeps hitting over and over again.

Mass murders and school massacres in particular are extremely rare events out of all U.S. gun deaths - most of which are suicides.

However, it seems likely that protecting schools from armed killers will be scrutinized for some time.

"It's kind of a close one there," Bollinger said of the line between being prepared and paranoid. "If your child hears something, don't sit on it."

He acknowledged people are hesitant to say something at the risk of starting a panic; but he cautioned the more advanced notice law enforcement has, the better chance they'll have of intervening in a threat.