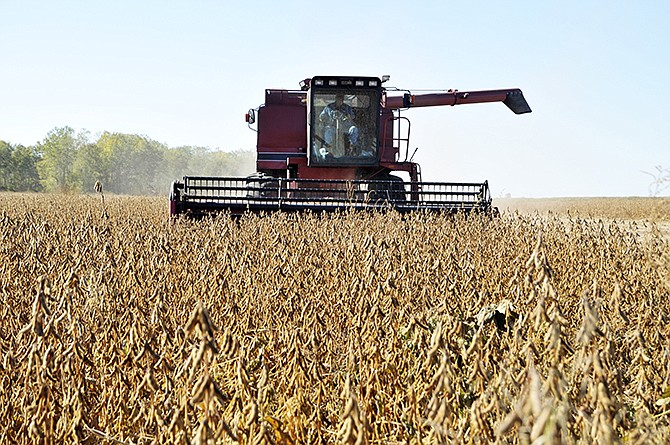 Donald Phillips empties his combine's hopper while harvesting soybeans during a past harvesting season in the Missouri River bottom land adjacent to old Hwy. 94 in southern Callaway County.

The sweeping $867 billion farm bill includes $664 billion over the next 10 years for the Supplemental Nutrition Assistance Program. Agricultural programs for crop insurance, farm commodity programs and conservation make up all but about 1 percent of the remaining $203 billion in the bill, according to the Congressional Research Service.

The 2014 farm bill was set to expire at the end of September, but a series of short-term extensions kept most programs under the massive bill running.

Missouri Farm Bureau President Blake Hurst said he is always worried when the farm bill expires. In the end, he was glad the process did not drag out for two years like it did when the 2008 farm bill expired in 2012.

"We're glad it's over, but it's good news for Missouri farmers," Hurst said. "It's a relief."

Generally, crop insurance programs are the most important programs for row crop farmers in Missouri, Hurst said. A handful of safety net programs in the new bill also protect farmers when prices are particularly low.

"Since crop insurance tends to be revenue insurance, it tends to give you insurance against droughts, floods, hail, insects and every other pest," he said. "It's the most important part, I think."

Missouri Soybean Association President Brooks Hurst said in a statement the new farm bill helps soybean farmers as they market their 2018 soybean harvest and plan for 2019.

"Maintaining (crop insurance and conservation) programs is critical for farmers, and all involved with soybeans as we continue working to grow demand and develop new markets," Brooks Hurst said. "This is welcome good news as we wind down a tough year, and we thank all involved in its passage."

The bill also authorizes the U.S. Department of Agriculture to spend $150 million over the next five years to establish a vaccine bank to combat foot and mouth disease. The highly contagious viral disease can cause fever and blisters on tongues, lips and hooves of cows, pigs, sheep and other livestock.

Mike Deering, president of the Columbia-based Missouri Cattleman's Association, said he is glad livestock farmers made progress by establishing a vaccine bank to combat the disease, but he was disappointed the bill did not allocate more money for research.

"That's an extremely important piece of the puzzle as we look to make sure that we maintain the integrity of the food supply and herd health," Deering said.

Farm bills always take compromise, he said. In the end, he said the bill will be great for Missouri's farmers.

Agriculture was an $88 billion industry in Missouri in 2016, according to the Missouri Department of Agriculture. Soybeans were the state's top ag export in 2016 and totaled more than $2 billion. Corn was the second largest ag export, with receipts totaling more than $1.6 billion in 2016.

Beef exports made up more than $1.5 billion in receipts and were the state's third largest ag export, according to the Missouri Department of Agriculture.

Chris Chinn, Missouri Department of Agriculture director, said in a news release the state's farmers and ranchers faced a tough year this year, but ended it on a high note with the passage of the farm bill.

"We are accustomed to uncertainty in agriculture and remain appreciative of the blessing to be involved in an industry dedicated to feeding, clothing and fueling our nation," Chinn said in the new release.

The Senate passed the bill easily Dec. 11 by a vote of 87-13. Republican U.S. Sen. Roy Blunt and Democratic U.S. Sen. Claire McCaskill both voted for the bill.

On Dec. 12, the House passed the bill just as easily by a margin of 369-47 and sent the bill to the president's desk. Seven of Missouri's eight House representatives, including Republican Blaine Luetkemeyer, District 3, voted to approve the final version of the farm bill.

Rep. Vicky Hartzler, R-District 4, voted to approve a previous version of the farm bill, but was one of 16 representatives who did not vote on the final bill.