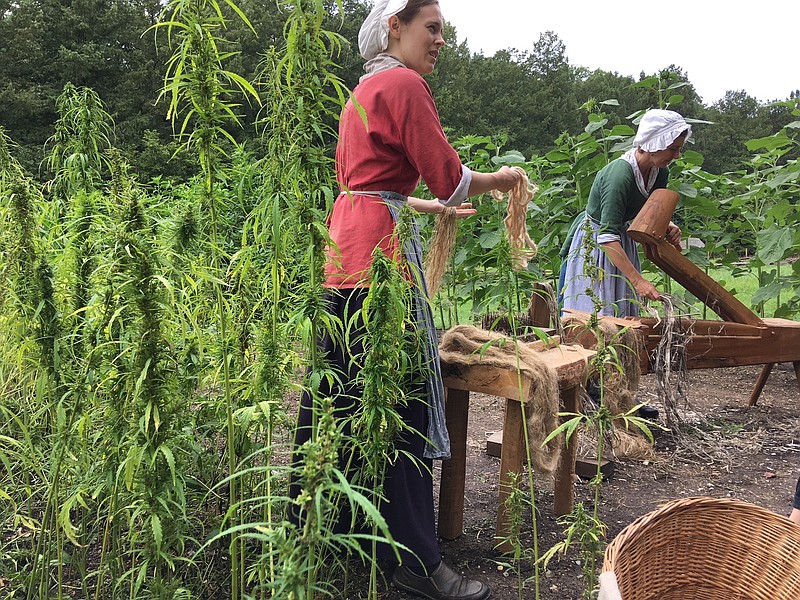 MOUNT VERNON, Va. (AP) - Chopping cherry trees is not the only horticultural myth surrounding our most famous Founding Father - slacker culture has long reveled in the tenuous link between George Washington and marijuana.

Like many myths, though, Washington's connections to cannabis are not invented out of whole cloth. Washington did indeed grow industrial hemp on his Mount Vernon estate, a variety of the cannabis plant but not one that contains enough THC, the psychotropic chemical in marijuana, to cause any mind-bending effects.

Indeed, the idea of smoking marijuana to get high would have been foreign to people in Washington's time. Recreational use of marijuana in the U.S. doesn't begin until the 19th century, by most accounts.

At Washington's Mount Vernon estate, horticulturalists in May planted the first hemp crop in centuries on the estate grounds to highlight the Founding Father's life as a farmer. Mount Vernon employees known as interpreters on Wednesday harvested the crop and processed it into fiber that could be used for making rope or cloth.

Dean Norton, Mount Vernon's director of horticulture, said Washington references hemp more than 90 times in his journals and diaries, and gave consideration to it as a cash crop when the tobacco market plummeted in the 1760s. Ultimately, Washington turned to wheat, but continued to grow hemp for use on the estate.

As workers used a scythe to cut and harvest the small patch of hemp on the estate, a faint aroma similar to marijuana floated through the air. Interpreters then showed the process of drying the hemp and "putting it through the hackles" to comb it into fibers. At Mount Vernon, the hemp fibers could be used for netting on fishing boats in the Potomac or to weave clothing that might be worn by the slaves.

"As soon as we planted it, we had those monsoons come through and wash away a lot of the seed. We had to re-sow," Norton said. "I learned more about hemp than I ever thought I would. It's an amazing crop."

Only recently has it been legal for Mount Vernon to plant a hemp crop. The Virginia General Assembly passed legislation in 2015 and 2016 allowing limited hemp cultivation under a program administered through state universities. Federal and state laws still keep tight rules in place for registration and possession of seeds, along with other regulations.

Brian Walden with the Virginia Industrial Hemp Coalition said he hopes the plant's connection to Washington will help the public understand the wholesome nature of hemp.

"Hemp was the original fabric of our lives," he said.