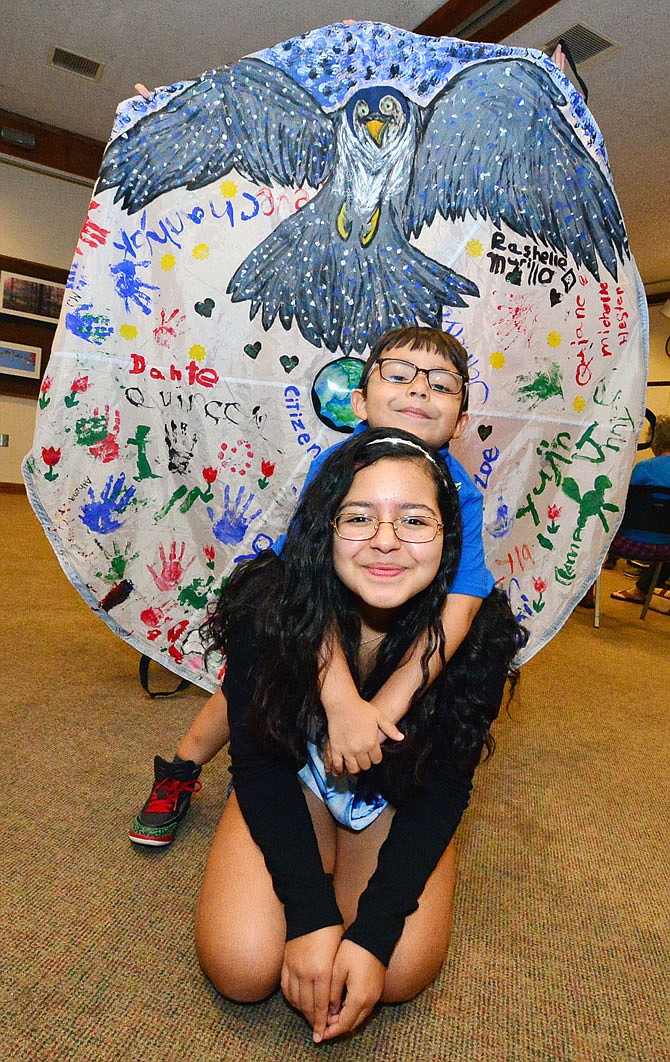 Dante Murillo, 5, and big sister Rashelle, 12, of Jefferson City, pose in front of the parachute they helped create for the Parachutes for the Planet Mother Earth Project on Wednesday during a Jefferson City Citizens' Climate Lobby meeting at the Missouri River Regional Library. The group planned the project for Earth Day. Groups from 28 countries and 26 states are making parachutes to display on the National Mall in Washington D.C.

Falcons don't normally need parachutes to soar, but Rashelle Murillo hopes the peregrine she painted on a chute that's destined for Washington, D.C., will serve as a symbol to help convince leaders and communities to take better care of the Earth, its people and its biodiversity.

Murillo said she hopes her art will inspire people to action "so the new generation can have clean air."

The local Citizens Climate Lobby is a chapter of the larger national, non-partisan nonprofit of the same name that advocates for policies designed to combat climate change.

At the local group's meeting Wednesday night - in the upstairs meeting room of the Missouri River Regional Library, with photographic portraits of wild plant and animal life adorning some of the walls - Jefferson City resident Jeff Holzem said the main goal is to get a carbon fee and dividend passed.

Such a tax on sources of carbon pollution would be aimed to reduce carbon emissions. Different plans apply the tax revenue collected in different ways - as a dividend paid out to individual households or every Social Security number; funding for projects that reduce carbon and other greenhouse gas emissions; or funding for infrastructure, low-income people and other programs.

The parachute Murillo painted with help from her mom, Diana; brother, Dante, a kindergartner at Clarence Lawson Elementary School; and other children at an Earth Day event in Columbia will soon join hundreds of other chutes from 26 U.S. states and 28 countries to be displayed Sept. 8 in Washington on the National Mall, and then again in the nation's capital Oct. 13-14 for an exhibition at Georgetown Waterfront Park.

Diana likes to draw, too, but she's never had any work like the chute that's going to travel elsewhere.

Dante said he contributed the red handprint of his in the middle of the chute, along with some dots.

Rashelle said she picked a falcon because of how it can symbolize clean air, and a peregrine, specifically, because it's one of the world's fastest birds - with a possible top speed of 200 mph in a diving strike at prey, according to the Audubon Field Guide available online.

The Audubon guide adds the bird was seriously endangered last century by the impacts of pesticides, but "current populations appear to be stable or increasing." The guide also projects climate change will make some of the species' current homes in the Pacific Northwest, the Gulf Coast of Texas, and the arid areas of southeastern California and southwestern Arizona significantly less habitable for the bird during the next 50-60 years, though the peregrine might be able to expand its range further inland and north in winters.

The Mother Earth Project that organizes "Parachutes for the Planet" is a nonprofit founded three years ago by artist Barton Rubenstein, and the organization "encourages students to discuss environment/sustainability issues and create artwork or task-based projects to express their ideas and concerns," according to the project's website.

The parachutes - circular pieces of cloth that, importantly to note, would not actually save someone who had to jump from a great height - are decorated by individuals, schools and communities "with artwork and personal comments about our concerns about the health of our planet. Parachutes can been seen as 'safety nets' and when held by groups during demonstrations or collectively displayed in large numbers, they transform into powerful messages of strength, hope and communal determination," according to the project's website.

The project's website also says through displaying the art, the goal is to bring attention to spur legislative action on climate change similar to the effect that thousands of HIV/AIDS quilts exhibited in Washington in the 1990s had to spur funding for research for that disease.

The Murillos' and local climate lobby's parachute is one of only two from Missouri and displayed in the Mother Earth Project's online database - motherearthproject.org/parachute-database/. The other Missouri chute is credited to the Dancing Rabbit Ecovillage in Rutledge.

Other contributing countries include the major carbon-based energy market suppliers and consumers of Australia, Canada, China, Germany, India, Kuwait, Mexico, Nigeria and Russia. The U.S. chutes come from dozens of states that span every region of the country, including the states of Alaska, Colorado and South Dakota - also major producers of carbon-heavy oil, natural gas and coal.

Rashelle said other ways for students to get involved in caring for the environment are to volunteer to pick up trash or study up on ways to reduce carbon levels.