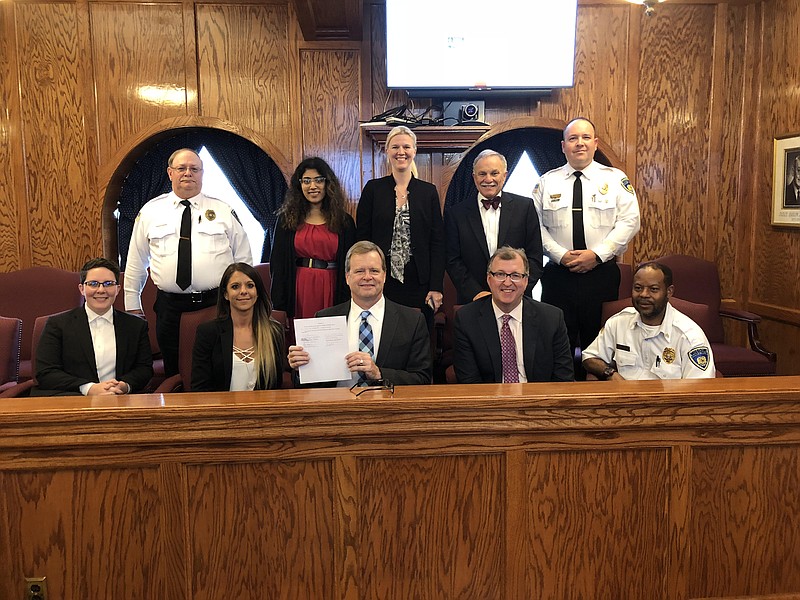 FILE: Plaintiffs and attorneys who won a civil lawsuit against the Missouri Department of Corrections over unpaid compensation and overtime compensation display the jury verdict Wednesday, Aug. 15, 2018, at the Cole County Courthouse.

A lawsuit filed Aug. 14, 2012, accused the department of requiring corrections officers throughout the state to do work before and after assigned shifts without being paid for that mandated work.

Cole County Presiding Judge Pat Joyce ruled in favor of the plaintiffs Aug. 10, finding that the DOC had breached its agreements with the corrections officers.

The jury began hearing evidence last week, then spent 3 hours Wednesday deliberating before reaching a verdict - that the department owes $113,714,632 in damages.

Attorney General Josh Hawley's staff and the private-practice attorneys from St. Louis who helped with the defense have been given 10 additional days to file a motion for a new trial - the usual first step following a verdict that typically leads to an appeal.

"This lawsuit involves actions by the Department of Corrections over multiple decades and multiple administrations," Hawley spokeswoman Mary Compton told the News Tribune. "The Attorney General's Office has been defending this lawsuit since the Koster administration and will continue to do so. We respectfully disagree with the verdict today."

Department of Corrections spokeswoman Karen Pojmann said the DOC had nothing to add to the attorney general's statement.

Attorney Gary Burger, of the Burger Law Firm in St. Louis, who represented the officers, noted several corrections officers and sergeants from state prisons across Missouri came to Jefferson City to testify, telling the jury the DOC required them to perform pre- and post-shift work but refused to pay them for it.

The jury awarded all compensation requested by the plaintiffs for the 11-year period covered by the lawsuit, affecting a total of 13,000 officers. There are 4,500 officers currently working who would be affected by this decision. The rest are retired.

"This has long been a problem, and Corrections refuses to change their system," Burger said. "It's a hard place to work; and the stories these officers told the jury about working around murderers, rapists and other bad people, I think, were heard loud and clear.

"It's salt in the wound for the officers because they don't get paid for this time - and if they are late, they get written up. When DOC breached its agreement with its officers, it is responsible for all the harm it caused."

The plaintiffs argued the DOC did not pay straight-time or overtime wages for the pre- and post-shift activities the DOC required employees to perform - including going through security, signing in, getting their keys and getting to their duty assignment locations for the day.

Plaintiffs are requesting the DOC change this policy now and in the future and compensate all class members for the unpaid time they spent performing the pre- and post-shift activities.

Burger noted it's not easy to say how much each officer could receive from the settlement.

"Different people worked different times in the prisons," he said. "It depends on how long they worked at the prisons. A person that worked for a year wouldn't get as much as someone that had been there all 11 years covered in the suit."

Missouri Corrections Officers Association Executive Director Gary Gross said he was unaware of any other large lawsuits coming up in the future, but individual suits by DOC employees are being planned.

"This is justification for what we've been saying for a long time," Gross said. "A lack of adequate pay and loss of benefits has put us in this position."

The Associated Press reported in April that the state had paid out nearly $600,000 to a female corrections officer to settle a sexual harassment suit. Sixteen of the state's 45 biggest payouts over the past five years related to employment discrimination - with six of those involved DOC workers - and settlements and court decisions have cost Missouri taxpayers more than $52 million, the AP reported.