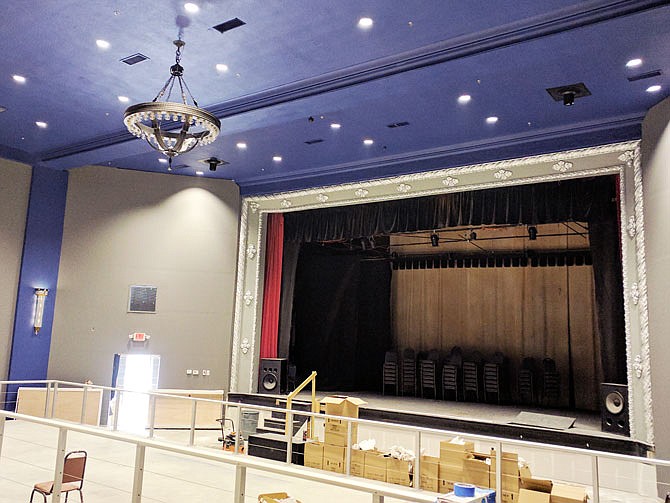 The Brick District Playhouse will soon be ready to host a variety of events, board members said. New features include a tiered floor, restored vintage wall sconces and an antique ticket window.

It's closer to curtains on construction at the Brick District Playhouse.

Renovations of the historic theater's interior have been in progress since early 2017. While there are still plenty of projects to complete, the playhouse is ready to debut as an event hub, playhouse board member Debbie LaRue said.

"People are able to enjoy it now," she said, pointing to upcoming events such as a wedding reception and Shelby Lee Rowe's planned Aug. 11 concert.

One recent improvement is a tiered floor with railings, which should be suitable to more types of events than a slope.

"We ordered railings, and (board members) Phil Glenn and John Jennings spent many hours meticulously putting in this beautiful railing," LaRue said.

The walls have a handsome coat of paint, and a sound booth and ticket office are under construction. One improvement is visible before a visitor even enters the theater: the latest project is the installation of an antique ticket window. It's curved, with dark wood trim and panes of stained glass.

"Some time ago, Al and Betty Ruth Thomas offered an antique ticket window that they obtained from a former theater in Farmington," LaRue said. "This past week, we've been working on placing it in the wall."

Board member Phil Glenn, whose grandparents built the theater in 1927, said he was excited about the preservation of antique wall sconces.

His grandparents leased the theater to the Dubinsky brothers, who later went on to found AMC, from 1928-1948, Glenn said. Glenn's father inherited the playhouse afterwards and began renovations.

"I think those sconces were put in then," he said. "We kept the sconces and had them restored in Virginia - they were in terrible shape."

LaRue said she's glad to preserve that piece of history.

"Throughout this project, we've had several people ask, what about the sconces? Did you save the sconces?" she said. "We just got them back recently. P&L electric put them up. They're beautiful. They really add a finishing touch to the theater."

More improvements are planned for both the near and more distant future, including a coat of paint for the stage, dressing room renovations, installing a sound system, more lighting and renovations to the the balcony.

"It depends on how much money we have to work with," LaRue said.

The current main fundraising effort is tax credits, board president Tom Riley said. In December, the Missouri Development Finance Board awarded the theater $150,000 in 50-percent tax credits. Donors receive a federal charitable deduction for the amount of the donation, and tax credits that reduce their state tax liability by half of the donated amount.

So far, about half of the tax credit money has been claimed, Riley said.

"We hope to raise the rest of the tax credit financing by the end of the year so we can have the auditorium and balcony not only functional but decked out," he added.

Other money has come through Brick District activities such as Morels and Microbrews and individual donations.

"Most of (the money for future improvements) will be raised through the events that we're having," Riley said. "We've had multiple performers contacting us wanting to perform specifically in that venue."

Board members thanked the community for its support.

"The community has given us encouragement and dollars," LaRue said. "Their encouragement and their excitement to see the playhouse open, that's been a strong incentive and inspiration for us. The city has been a huge partner with cooperation, teamwork and resources."

She and Glenn said they feel the Brick District Playhouse will be a boon for the town.

Asked about what the revitalized playhouse means to her, LaRue said, "OK, give me a Kleenex and I'll tell you."

She said the community will be able to benefit in many ways.

"It's really rewarding," Glenn said. "It seems like the downtown's revitalizing too, since we started the project. That building was kind of a white elephant."