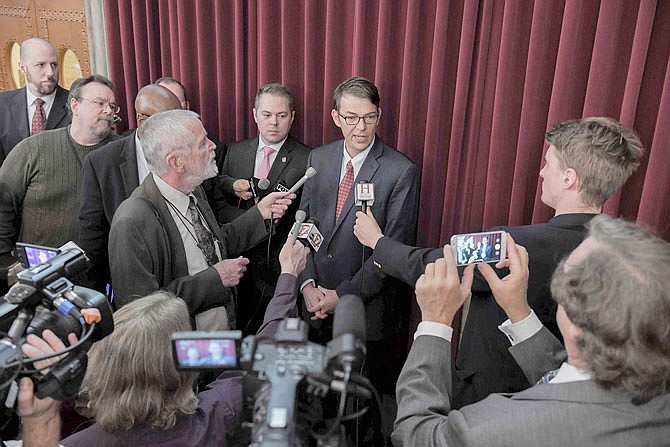 Missouri House Speaker Todd Richardson answers questions Thursday during a press conference. Richardson wants the House Special Investigative Committee on Oversight to work as quickly and thoroughly as possible to determine whether the governor should be impeached.

House Speaker Todd Richardson wants the House Special Investigative Committee on Oversight "to operate as expeditiously as they can, but as thoroughly as they can" in determining whether Gov. Eric Greitens should be impeached.

"Any time you're talking about exercising what is one of the most consequential of legislative powers, you shouldn't act rashly," Richardson, R-Poplar Bluff, told reporters Thursday afternoon. "We're not going to take it lightly, (and) I'm not going to put any artificial deadlines on this committee."

The committee last week released a report with details about the governor's affair with his hairdresser beginning in March 2015 - before his gubernatorial campaign had begun - including the allegations he took a picture of the woman, without her consent and while she was at least partially nude.

He's been charged with felony invasion of privacy for that incident and faces a May 14 trial in St. Louis.

This week, Attorney General Josh Hawley said Greitens also may have violated state law when he used a donors' and email list from his charity, The Mission Continues, for his political campaign. No charges have been filed yet in that case.

And the special committee, chaired by Rep. Jay Barnes, R-Jefferson City, apparently is studying that situation during its closed-door meetings.

The Missouri Constitution allows only the House to decide whether an official like the governor should be impeached, but when the governor or a Supreme Court judge is the accused in an impeachment case, the state Senate chooses seven judges to hear the case.

"There's no precedent to look back on how that happens," Kehoe explained. "A lot of this is going to be charting some new territory.

"It's a non-partisan issue, and I'm sure we'll look at the right slate of judges as per the direction from the Constitution (and state law)."

The law says the judges must be active members of the circuit or appeals courts, but cannot be from the Supreme Court.

Richard recognizes the historical importance of the issues lawmakers are facing about the governor's situation.

"I recognize what we do here is going to set a precedence for years and generations to come," Richard said. "I've encouraged the speaker that, whatever decisions he and I make, that we do it together."

For his part, Richardson said: "We want the House committee and the Legislature to execute a thorough and fair process and a process that makes sure that the members of the General Assembly who are going to be tasked with deciding some of those recommendations, that they have the most information in front of them to make a good decision.

"I think every member of the General Assembly should want this process to have fundamental fairness in it."

Last week, Richard and Richardson said they agreed lawmakers should consider calling themselves into a special session to begin after the current, regular session ends May 18.

It's a process voters added to the Constitution in 1988 but has not yet been used.

It requires at least three-fourths of the members of each chamber - 123 in the House and 26 in the Senate - to sign a petition that is submitted to the secretary of state.

If the petition contains enough signatures, the special session lasts for 30 days.

Richardson told reporters a substantial number of House members already have signed the petition, but he didn't know how many.

Richard said senators had not yet seen the petition, but the senators must sign the same petition the House members sign.

Meanwhile, Senate Democrats want House and Senate leadership to hold onto all bills after they've been passed so - if the governor is impeached - he won't have a chance to act on them.

"There is simply no reason for the House to delay impeachment," Senate Minority Leader Gina Walsh, D-Bellefontaine Neighbors, told reporters. "Until they do, we have serious concerns about Eric Greitens having the power to sign or veto legislation.

"We know that Eric Greitens likes to threaten people. So, it's not out of the realm of possibility that he would leverage his signature or veto over lawmakers considering his impeachment."

The Constitution requires the Senate president pro tem and House speaker to sign bills after they've been passed by the Legislature but before they're submitted to the governor - so they can decide when those bills are submitted.

Greitens would have only 10 days to sign or veto any bill sent to him from now until May 4. But any measure passed during the last two weeks of the legislative session are considered as having been sent May 30, and the governor has 45 days to sign those.

Sen. Jill Schupp, D-Creve Coeur, said: "I don't think I, nor probably any of my colleagues, have confidence that this governor is going to do the right thing in terms of which bills he would sign (or) veto."

Richard said: "My goal (for the rest of the session) is to keep the process moving and keep the House bills moving (in the Senate).

"And if the minority leader (Walsh) feels that we're best served by holding on to documents for two or three weeks or a month " he said he's not opposed to that.