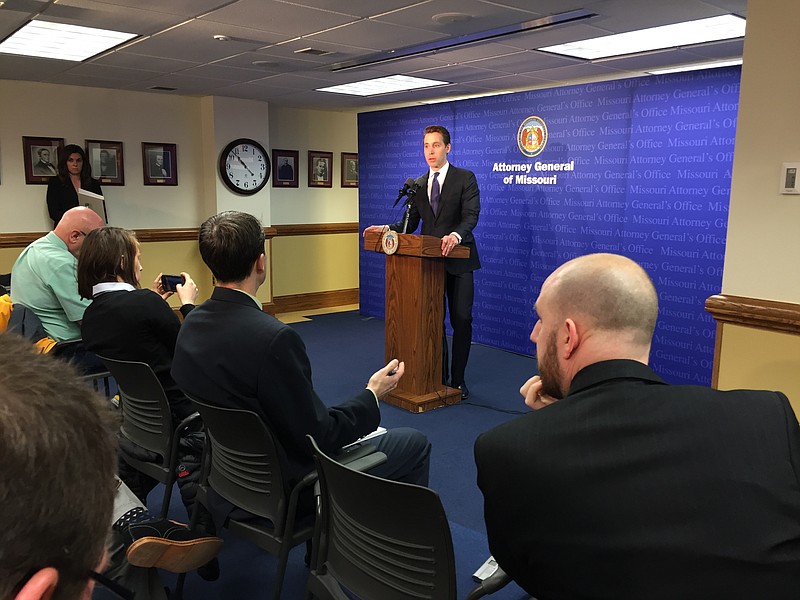 Missouri Attorney General Josh Hawley on Tuesday said his investigation into a veterans charity founded by Gov. Eric Greitens revealed evidence that Greitens' use of the charity's donor list broke the law.

The Associated Press first reported in October 2016 that Greitens' campaign had obtained a list of donors to The Mission Continues, which helps returning veterans adjust to life at home through community involvement. The nonprofit organization "deploys veterans on new missions" within communities, according to its website.

"We believe that the evidence we have will support a finding of probable cause that the governor obtained the list, used the list (and) transmitted the list without the permission of The Mission Continues and he did so for political fundraising purposes," Hawley said during a last-minute news conference Tuesday morning.

Hawley said it's up to St. Louis Circuit Attorney Kim Gardner to determine if she will file a charge of computer tampering against Greitens.

The alleged crime happened in her jurisdiction, Hawley said.

"Yesterday, prosecutors in the Circuit Attorney's Office met with members of the Attorney General's team," according to an email from Gardner's office. "The AG's team provided information they have gathered to us, and we are reviewing the evidence. We can't discuss any specifics at this time, as the investigation is ongoing."

Computer tampering is a Class D felony in Missouri if a person uses data on another's computer without permission to obtain more than $500.

"Anyone who has set foot in a Missouri courtroom knows these allegations are ridiculous," Greitens said in the statement to the AP. He added: "We will dispense with these false allegations."

The Mission Continues spokeswoman Laura L'Esperance told the AP on Tuesday that Greitens had access to the donor list as CEO but did not have permission to use it for his campaign.

"The Mission Continues did not authorize the use of any donor information for political purposes, nor did we promote Governor Greitens for political office," she told the AP.

Federal law bars 501(c)(3) charities from intervening in political campaigns on behalf of candidates. The IRS has ruled charities cannot give donor lists to politicians but can rent them at fair market value if made available to all candidates, according to the AP.

Hawley said the statute of limitations for the charge is approaching and that he obtained a warrant Monday that allows him to share evidence from his investigation with the St. Louis prosecutor.

"The aim of our investigation was to determine whether charitable resources were used for political or personal gain," Hawley said.

He said investigators have issued multiple subpoenas, collected and reviewed hundreds of thousands of pages of evidence, and gathered testimony from witnesses under oath.

"In the course of this investigation, we have uncovered evidence of wrongdoing that goes beyond Missouri's charity laws," Hawley said. "Within the past several days, we have obtained evidence of possible criminal violations of Missouri law."

Evidence likely would support a finding of probable cause that Greitens used the donor email list - gathered for the nonprofit organization's internal purposes - for political fundraising.

Hawley's office on Monday obtained court permission to share the evidence it has concerning the charity with the St. Louis prosecutor.

The move comes as the Missouri House of Representatives conducts a separate investigation involving the governor and a St. Louis criminal trial is set to begin May 14 regarding the felony invasion-of-privacy charge against Greitens stemming from allegedly taking an unauthorized, partially nude photo of a woman with whom he was having an extramarital affair in 2015.

Greitens has admitted to the affair and contended that the relationship was consensual.

The day the House investigatory committee released a report detailing its findings about the affair, Hawley called on Greitens to resign.

Hawley, a Republican in his second year as the state's top lawyer, is considered the Republican frontrunner in this year's election challenge to U.S. Sen. Claire McCaskill.

The governor's critics again called for his resignation Tuesday.

House Minority Leader Gail McCann Beatty, D-Kansas City, said each day brings more revelations of Greitens' wrongdoing. She issued a statement calling on the governor to "spare himself and the people of Missouri the ordeal of impeachment proceedings."

The report concerning the affair, much of which came from testimony from the governor's former mistress, included details of their first sexual encounter, when he is alleged to have captured the photographs. But it also covered other days when they had sexual contact and at least one incident in which Greitens allegedly slapped her.

Hawley said Tuesday he had read the report and noted it was significant to him because the evidence included sworn testimony.

"I think the governor should resign," Hawley said. "I think those offenses - that misconduct that the House report sets out - that those do constitute impeachable offenses."

Ultimately, that's up to the House, he said.

Legislators on Tuesday began gathering signatures necessary to call themselves back into session to discuss the possibility of gubernatorial impeachment, something that has never been done in Missouri. It needs signatures on a petition from three-quarters of its members in each chamber. The special session would be limited to 30 days.

After releasing the report, the House Special Committee on Oversight again began meeting - this time to look into the allegations involving the nonprofit.

The committee also may be looking into other issues, including the alleged illegal campaign use of The Mission Continues' donor information and Greitens' staff's use of the text-messaging app Confide, which automatically deletes messages after they're read.

The attorney general's investigation into The Mission Continues will continue, Hawley said. If it again finds information outside the scope of the his investigation, his office will share that with the proper prosecutors.

Asked if the push against Greitens was politically motivated, Hawley shot back.

"I'm doing my job," he said. "And my job is to enforce the law in Missouri, to protect the people of Missouri. And that's exactly what I'm doing. I'm going to go on doing it no matter who criticizes me or tries to intimidate me," he said.

The Associated Press contributed information used in this article.