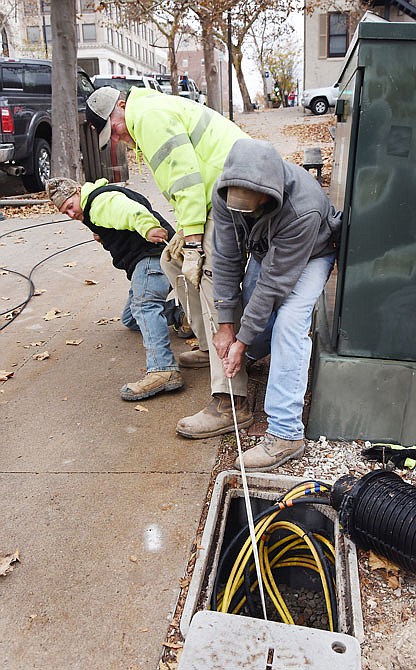 From left, David Bentlage, Mark Roettgen and Nathan Hale try to pull fiber optic cable through an underground pipe Tuesday morning. All are employees of Ridenhour Directional Drilling and were installing cable for Socket internet service under the 300 block of Madison Street.

Socket plans to begin two small expansions of its fiber-optic internet network in Jefferson City within the next few weeks.

Crews have been installing fiber-optic cable downtown near the intersection of East High Street and Madison Street since last week, but the company said that was unrelated to a planned expansion of its network.

Socket plans to add new connections with a project on U.S. 50 between Madison Street and Dix Road, Socket Marketing Manger Allie Schomaker said. The second will be in a couple-block corridor extending southwest from Madison Street to U.S. 54, she added.

"We've been expanding our network in Mid-Missouri for the past few years," Schomaker said. "We already have a fiber network in Jefferson City, and this is just a good investment and a good place to expand."

Crews began the unrelated fiber addition near the corners of East High and Madison streets this week for a business client who wanted high-speed internet service from Socket.

Over the years, Socket assembled its local fiber-optic network in a piecemeal fashion. Often, additions built to service clients, like the one downtown, allow the company to serve residents or businesses not originally targeted by the addition, Schomaker said.

Socket discontinued DSL service in August to outlying parts of Jefferson City and surrounding areas including Holts Summit, Lohman and Hartsburg. Socket hopes to replace those services with high-speed fiber.