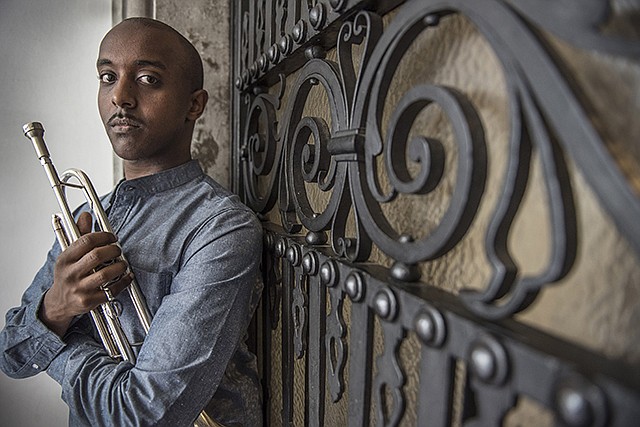 "Bleu" is Mehari's first album as a band leader, after two albums with the group Diverse. It was recorded in Kansas City and written to bring out the best in his esteemed backing ensemble, like world-renowned jazz pianist Aaron Parks and premier saxophonist Logan Richardson.

"Although I play the trumpet, it's in my musical personality to really focus on the ensemble at large, the people around me," he said.

Mehari and Richardson have a lively fugue on the album's last song, "We Love," in which the dual horn solo begins like an orderly debate between the two instruments and gradually grows into a heated brass argument before the song and album abruptly end, slamming shut the window into Mehari's imagination.

Each song on "Bleu" is unique, inspired by a variety of music - such as soul and hip hop - and emotions - from frenetic to desolate - wed into a cohesive listening experience.

"From a stylistic point of view it is a jazz album, but it draws from a lot of various forces, styles, genres that influence me," Mehari said.

The album's promotional tour hasn't started yet, but Mehari plans to perform in Japan, France, Spain and the United States. He said Columbia's "We Always Swing" Jazz Series has expressed interest in having him perform this year, and he has other Kansas City performances scheduled for April.

"The touring for the album is going to be spot-based and pretty sporadic throughout the year because the band members I have are pretty much all-stars in the jazz world, so it's a matter of scheduling," he said.

Mehari composed about half of the album's 10 tracks. Two are jazz standards - such as "I've Grown Accustomed To Her Face," a cover of John Coltrane's "A Moment's Notice" - and bandmates helped compose, as well.

The word "bleu" is French for the color blue.

"France has played a big part of my life for the past seven years," Mehari said. "I'm in Paris right now. I've been coming to France quite a bit to play, and starting to come here was a turning point in my career as far as what I've been able to do globally."

Mehari said his American fan base is the largest, but he is gaining support in Europe.

"We were here during that," Mehari said. "It's a homage and tribute to victims of that attack."

Although Mehari is currently based between Kansas City and France, he learned to play the trumpet in Jefferson City. He said he lived in the Capital City from about age 5.

"I don't consider it my home anymore because I've been in KC for 10 years," he said. "But I still come back to Jefferson City at least once or twice a year. I have some really great friends still there. I feel deeply connected to these people."

Mehari said he enjoys monitoring the Jefferson City music scene and is glad to see more venues than when he lived in town. "Everyone needs to hear live music everywhere, and it's great that's happening (in Jefferson City)."

He grew up very close to his aunt and uncle, Tesfai Tsehaie and Turu Negash, who still reside in the city. His father, Mehari Zehaie, lived in Jefferson City but passed away last year, and his mother, Rigat Ghebre, has since moved away.

Mehari began playing trumpet as a seventh-grader in Thomas Jefferson Middle School's band program and became obsessed with Miles Davis' album "Kind of Blue." He took a summer enrichment course on improvisation and loved it.

"I fell in love with improvisation and creating music in the moment," he said. "It was beautiful to me."

He continued pursuing jazz trumpet in high school and was taken under the wing of Jefferson City band teacher Tim Alexander. "Tim was a great teacher for me and exposed me to a lot of stuff," he said.

Mehari began touring with the VanHoose family band, led by Michele VanHoose, playing mostly blues and R&B around Mid-Missouri on the weekends. As an upperclassman, he also began performing as a solo jazz musician.

After high school, Mehari moved to Kansas City on a music scholarship, where he earned a bachelor of music degree in jazz performance from the University of Missouri - Kansas City Conservatory of Music and Dance in 2010.

"The (UMKC) jazz instructor, Bobby Watson, is a legendary jazz musician," Mehari said. "Literally, when he called me to tell me he wanted me to come to his school, I had his record next to me. It was serendipitous, to say the least."

Mehari moved to Kansas City and said it worked out great.

"I'm definitely living the dream, and here's why: I absolutely love music and playing music for people," he said. "To me, it's not about the end goal, it's all about the journey. My career is going to keep going and going, and if I don't enjoy the process, it doesn't make sense for me to do it."