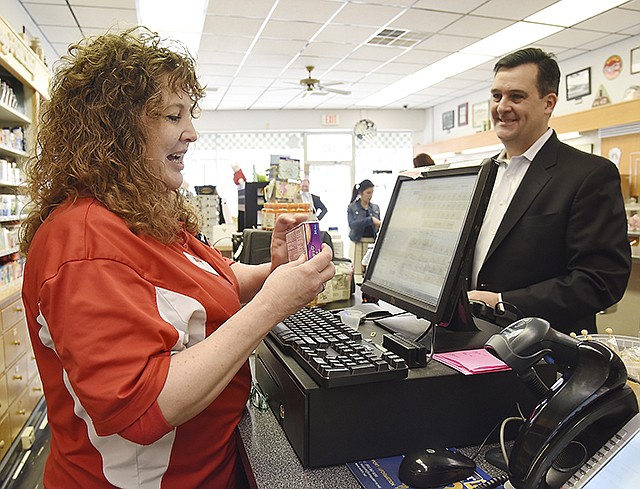 Cindy Renn waits on Jim Gwinner to demonstrate how the National Precursor Log Exchange program works Tuesday at Whaley's East End Pharmacy. Gwinner is a spokesperson for the Consumer Healthcare Products Association and demonstrated by making a purchase of pseudoephedrine without it being stopped at the cash register.

Missouri is attempting to shed its reputation as the methamphetamine capital of the country, as law enforcement work with the National Precursor Log Exchange (NPLEx) to decrease the level of meth production across the state.

With the help of NPLEx, the sale of 96,580 grams of psuedophedrine was blocked from potentially being used illegally in 2016, according to the Missouri Department of Health and Senior Services.

Whaley's East End Pharmacy participated in a demonstration of the NPLEx program Tuesday, illustrating how easy it can be for retailers and pharmacists to join the movement to combat meth.

NPLEx is a web-based application that monitors consumer sales of medications that contain ingredients such as psuedophedrine (PSE), one of the main ingredients used to make methamphetamine. Since the implementation of NPLEx in 2011, the number of identified meth labs have decreased from 2,100 to 314 in 2016, according to the Missouri Highway Patrol.

Missouri is one of 33 states using the software to combat meth production.

When customers come in to purchase a product such as Sudafed or Allegra, they are asked for their driver's license or state identification, allowing the pharmacist or cashier to scan and log the information in the database. The data from the ID, such as name and address, are used to determine if a customer has exceeded his or her purchase quantity, measured in grams.

Amanda Rudder, pharmacist at Whaley's, said the average weekly limit for purchase of PSE is 3 grams, the monthly limit is 9 grams, and the annual limit is 108 grams.

Rudder said if a person exceeds their limit, they would be denied the purchase and provided an 800 number that would explain they have exceeded their purchase limit and provide them an overview of their purchase history.

Only law enforcement officers have access to the detailed reports associated with consumer purchases, and they can be alerted when a person suspected of suspicious activity makes a purchase.

The key function of NPLEx program is to monitor consumer sales of PSEs, not prescription-based purchases. Of the state representatives present at the demonstration, Rep. Jason Chipman, R-Steelville, suggested the state find a way to include Schedule II drugs, identified as opioids, to work within the current setup of the NPLEx program.

In Chipman's opinion, there isn't really a difference between NPLEx and a prescription drug-monitoring program (PDMP).

"In reality, it's doing the same thing, so instead of creating a whole new program, how about you upgrade the level of security?" Chipman said. "Then you get rid of all the issues about overprescribing, where opioids counteract with sleeping pills or Xanax because you can see what they have been prescribed. If PDMP is such a big deal, why not get pharmaceutical companies to pay to add Schedule II drugs to this system?"

Amanda Merritt, a pharmacist from southeastern Missouri, refuted this strategy, noting there are two levels of monitoring at play with the two programs.

"The reason why this program wouldn't work for that purpose is because you cannot clinically ascertain whether it's appropriate or inappropriate for that dosing," Merritt said. "There are hard limits set in place on this system (NPLEx), so you're quantity-driven."

With opioids, Merritt explained, the dose appropriate for an end-of-life patient would be much higher than for a patient suffering from back pain.

"You can't set hard quantity limits based the milligrams of the opioid that patient is receiving to reflect the inappropriateness of the prescription," Merritt said.

"With allergy season starting early, I like the safeguards this program has in place," state Rep. Mike Bernskoetter, R-Jefferson City, said. "But I do disagree with the pharmacist. Surely there is a way to figure this out and combine the programs."

Ron Fitzwater, chief executive officer of the Missouri Pharmacy Association, told the News Tribune in the early days of the NPLEx system they approached Appriss, the data solutions and analytics company used nationwide, about integrating the programs, and they were told it's nearly impossible to do so.

When a prescription is involved, Fitzwater explained, law enforcement officers no longer have access to the data.

"Appriss has a program that operates a prescription drug-monitoring program, but they're done side by side with the NPLEx system. They don't merge the system together," Fitzwater said. "The two systems look similar, but they are very different in the operation of what a pharmacist needs to do."

He said a PDMP tries to catch people seeking duplicate prescriptions, whereas NPLEx tracks when a person hits the quantity limit.