Icing on the dome 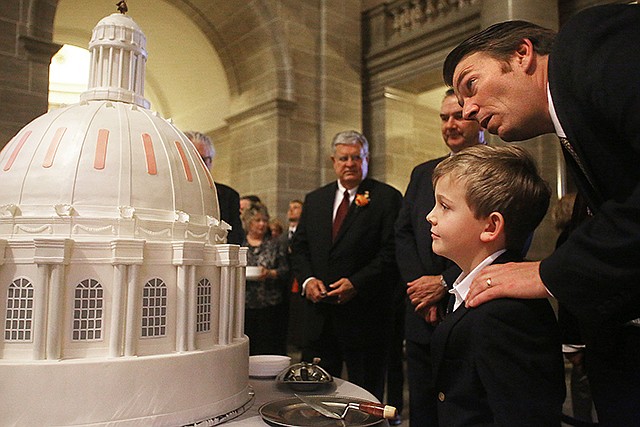 House Speaker Todd Richardson, right, stands Wednesday with his son Sawyer Richardson, 8, during the Capitol Capstone anniversary celebration at the Capitol. The Missouri State Capitol Commission hosted a celebration of the centennial of the laying of the capstone of the Capitol with a "dome" cake baked by Edith Hall.

The celebration of the capstone anniversary of the Missouri State Capitol on Wednesday included a cake replica of the iconic dome on the historic building which is visible for miles.

The Missouri State Capitol Commission wanted something special and turned to sugar artist Edith Hall to make the confectionery creation for the reception on the third-floor of the Rotunda.

Hall, who owns Edith Hall Cakes in Hallsville, has served as a food stylist on The Learning Channel's "Save My Bakery" show and has had wedding cakes featured in Brides Magazine.

She began working on the cake after Christmas. She used approximately 105 eggs, 10-15 pounds of shortening, 30 pounds of fondant and 21 pounds of powdered sugar to ice the dome. The 42-inch-tall cake was full of details, including the drum, the dome and the cupola.

The part of the cake that was completely edible was the dome portion, which was made of white and chocolate layers with white icing.

Hall's husband, Larry, helped on the mechanical and structural part of the massive project they brought Wednesday to the Capitol, moving the three pieces to the Rotunda so Hall could assemble and touch up the cake. Hall added the decorative copper and shell medallions and the garland found on the actual dome, and the cake topper was the likeness of the bronze figure representing Ceres. As a last step, she used an edible pearl spray to give the entire cake an inviting sheen.

The cake drew many onlookers during the afternoon, and staff and legislators and their families stopped to snap photos.

After Jefferson City Mayor Carrie Tergin and other dignitaries performed a ceremonial cutting of the cake, guests were invited to taste the delicious piece of history.