Opposition to Rock Island Trail 'up against Goliath' 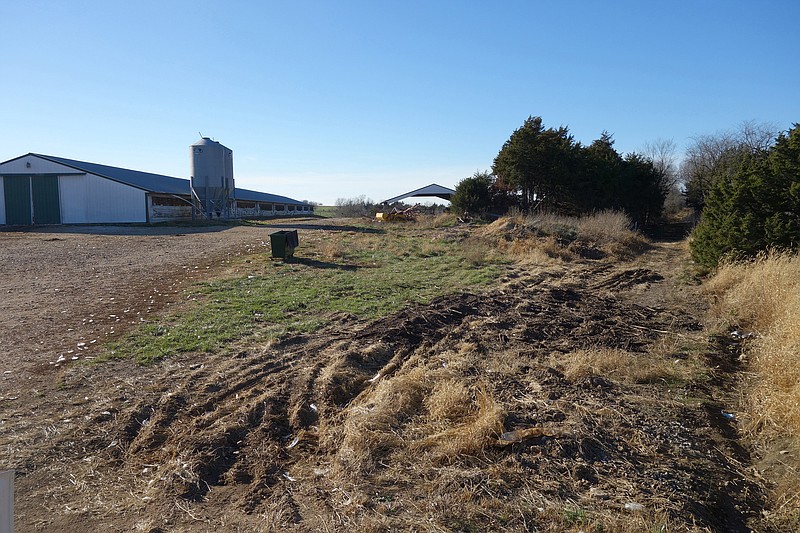 "We aren't being heard," Osage County farmer Rodney Luebbering said. "We are kind of up against Goliath. The government is against us; the law is against us. You are basically (forced) to take what they give you. We are in the minority, and our voice isn't getting out because we really don't have a way to connect."

The proposed Rock Island Trail would add more than 144 miles of Ameren's dismantled Rock Island Line railway onto the existing 47.5-mile Rock Island Spur nature trail, under the authority of the Missouri State Parks department. Rock Island Trail proponents intend to link the new trail with the existing 237-mile Katy Trail to create a more than 450-mile-long statewide loop, which would be one of the longest biking and hiking recreation corridors in the world, according to Ameren.

Ameren owns and expects to finish dismantling the decades-dormant railroad this summer. The utility company has offered to donate its 100-foot-wide right-of-way corridor to the State Parks department in accordance with the rails-to-trails conservancy program, intended to preserve railways by converting them into nature trails that could be quickly reverted to railroads if necessary. According to Surface Transportation Board records, the route includes 39 bridges, three tunnels and about 458 culverts, many of which are in need of repair. Ameren could receive a tax benefit in exchange for the donation, if accepted.

"With changes in the shipping markets over the last decade, we no longer need this as part of Ameren's coal transportation strategy," he said. "That said, the federal government, through the federal trails act, seeks to protect our nation's existing railroad infrastructure and retain this line intact. Ameren Missouri supports the creation of this trail as an enormous outdoor recreation and economic development opportunity for the communities along the corridor."

The Parks department has until Feb. 21 to accept Ameren's offer before the right-of-way corridor reverts back to the landowners along its path, but the Missouri Department of Natural Resources has submitted a request to the Surface Transportation Board to extend the deadline to Feb. 21, 2019.

The Surface Transportation Board is an economic-regulatory agency Congress has assigned to resolve railroad rate and service disputes and review proposed railroad mergers on a regional and national level. The board approved an application to abandon the line in 2014. According to its records, the vast majority of extension requests that meet the proper requirements were granted, which DNR's request does as well.

Some landowners are skeptical the trail's economic benefits will be as apparent as proponents predict and believe the Parks department's money would be better spent on maintaining established state parks. Rural residents have said they value their privacy, isolation and open hunting grounds. Having a public nature trail so near their homes would negate those positive aspects of living in sparsely populated areas.

But, not all of the nearby farmers oppose the trail. Charles and Charlotte Skornia went so far to support the trail that they offered to donate part of their land to install an Owensville Rock Island Trailhead.

"We support the development of the Rock Island Trail," the Skornias said in a letter to Gov. Eric Greitens, the Missouri Department of Natural Resources and Missouri State Parks. "The trail will not affect our farming operations. It is our belief that the Rock Island Trail will provide economic development in the Owensville area. We think that it is very important to maintain this valuable transportation infrastructure corridor for future use."

Area landowners who oppose the trail have complicated outlooks on how it would impact their lives.

Many farmers and other business operators are afraid the trail will negatively impact property values as well as the safety and productivity of their operations. These rural residents say they are being unfairly asked to face these struggles for the benefit of townspeople and tourists.

Nonprofit organization Missouri Rock Island Trail Inc. has been organized to support the trail, leaving the unorganized landowners in opposition to the trail feeling outmatched in the public debate. Missouri State Parks completed a public survey in August, in which trail supporters far outnumbered the opposition. While the results led trail proponents to call the trail proposal a "no-brainer," opposing landowners said many people from outside the state drowned out local opposition.

Osage County farmer and former DNR Disaster Coordinator Alan Reinkemeyer fears the trail will interfere with endangered Indiana gray bat populations that slumber in the railway's tunnels and nearby caves.

Producers Exchange #84 elevator owner Dean Shear worries he will have to spend thousands of dollars to move his grain equipment and anhydrous tanks farther from the nearby corridor in Lincoln to prevent trespassers from easily accessing and potentially stealing his property and using the trail as a getaway route. Anhydrous can be used in production of methamphetamine.

The Rock Island Line meets more than 1,000 agricultural operations, going through miles of row crop fields regularly sprayed with toxic pesticides. Farmers worry hikers or their pets could inadvertently come in contact with the toxins. Manure fertilizer is regularly added to many fields, and farmers are concerned potential hikers will complain of the off-putting smell.

Dairy and poultry farmer Mark Chamberlain, of Cole Camp, fears increased biosecurity threats if a public trail were to be installed on a right-of-way located within a few hundred feet of his dairy barns and hen houses. Calves meander through the property, and he fears otherwise well-intended people will want to play with his animals, leaving the trail and entering his restricted property, which would risk breaking biosecurity laws meant to protect against possible biological terror attacks, such as poisoning milk or egg supplies.

"There are our poultry houses, and there are the silos and the milk barn, not 300 feet away (from the railway)," Chamberlain said. "And here is my biggest concern: What if they walk up that road in the middle of the night and put something in that milk tank - and we don't know it and we don't know how to test for it?"

Chamberlain said most of his milk goes to Hiland Dairy in Springfield. A Hiland Dairy representative said every incoming truckload is tested before being added to a 50,000-gallon silo of raw milk. The company is confident microbial testing would identify hazardous milk, but that tainted milk would be dumped and the dairy operator who provided it would not be reimbursed for his or her losses.

Chamberlain is also concerned with possible bird flu outbreaks, in which poultry operations within the impacted area are quarantined for the surrounding 6.2 miles, far less than the distance between his hen house and the corridor.

"If bird flu breaks out, anybody could track (it) into this poultry. (Chickens) are very sensitive," he said. "The bird flu is an airborne disease; it can blow. That's the reason they quarantined 6.2 miles - because it is airborne."

Chamberlain's neighbor also has a turkey barn within a few yards of the corridor.

"A good example is the Katy Trail. In addition to statutory protections, Missouri State Parks has worked cooperatively with landowners adjacent to Katy Trail State Park to help minimize the likelihood for trespass from the trail onto adjoining property. This was accomplished primarily by marking the boundaries of state park property with signs placed at regular intervals, which also warn trail users not to trespass. This message is also provided via signage and brochures at all trailhead information depots. If the Rock Island corridor is developed, Missouri State Parks will develop similar measures."

Sarah Alsager, director of communications for the Missouri Department of Agriculture, said the department of agriculture could not speculate on biosecurity issues that may arise after the trail is installed, but the department recognizes the importance of property rights to farmers and ranchers. "If complaints were submitted to the department, the appropriate regulatory program would investigate to determine what occurred and would communicate with the Department of Natural Resources," she said.

Luebbering said signs warning against trespassing over the deconstructed railway already have been knocked down and ignored on his property, where he has found ATV tracks leading down the corridor. But trespassers are only part of his concern.

Luebbering also doesn't want to lose prized hunting ground, which he and his children enjoy. He said the hunting ground makes his property more valuable, so he would be more likely to support the proposal if the trail closed during hunting season.

He also would be more likely to support the proposal if it were known how much Ameren could receive in tax incentives. Whether the utility will be granted a tax benefit for donating the trail is still unknown, but Luebbering is confident it will be handsomely rewarded.

"I guarantee (Ameren) will get a tax credit," Luebbering said. "That's another hit to the taxpayer. Basically, it's welfare for the utility company. The way it is now, the process (hurts) the landowner and makes the utility company a (lot) of money."

When asked to comment on possible tax benefits and financial incentives through the donation, Ameren replied: "This donation to the DNR is about taking valuable land that no longer is part of our strategic plans and transferring it so it can be developed into an area that can be enjoyed by the community.

"We believe any subsequent salvage revenue or potential tax breaks that may be available upon completion will be minimal compared to the overall value of the property donated."