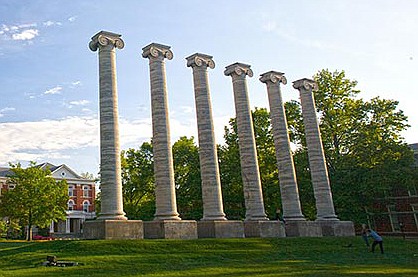 The programs are intended for low-income families whose students already qualify for federal Pell grants, to fill the gap between the total cost of tuition and fees and other financial aid the students also will receive.

The programs' names are "an homage to MU's status as a land grant university," the school explained in a news release - although no actual land grant funds are being used.

The programs are being offered only at the Columbia campus and won't be available at the university's other campuses in St. Louis, Kansas City or Rolla - nor at any other state-owned school such as Lincoln University.

Based on current enrollment, MU's Thursday news release reported, officials expect more than 3,500 MU students from Missouri - about 10 percent of the Columbia campus' total enrollment - will qualify for the grants each year.

MU spokeswoman Liz McCune said Friday more than 60 of those eligible students are from Mid-Missouri, including 38 from Jefferson City, 15 from Fulton and seven from Ashland.

"This will help eliminate the financial barrier for many students in Missouri," MU spokesman Christian Basi said in an Associated Press story about the programs. "This is something that has been in the works for a significantly long time. It is not in response to any recent news."

Nick Prewett, executive director of MU's Office of Student Financial Aid, said in the school's news release: "Keeping higher education affordable and addressing student debt has been a focus at Mizzou for many years. We have a strong commitment to help students identify the financial resources necessary to fund a Mizzou education, resulting in students graduating with the least amount of debt."

With the 2017-18 school year already underway, the MU programs won't begin until next year, and they will be available for incoming freshmen, transfer students and continuing students.

McCune said some people have worried in online comments that MU, a "selective" admissions school, will reduce its entrance requirements to help students get the new financial aid programs, "letting in students who aren't qualified."

McCune said: "That's not true at all."

"We are not changing our academic requirements in any way."

Some of the money will be used for tuition, fees, and room and board for students in MU's Honors College, which has even more rigid admission requirements.

"This isn't about lowering standards at all," McCune said. "This is about retaining Missouri's best and brightest and incentivizing them to come to Mizzou."

The new programs were announced only months after the Columbia school announced its financial conditions were so dire it needed to examine its programs and cut more than 300 jobs.

In a list of Frequently Asked Questions about the new financial aid programs, the school said it can afford them because: "These grants represent a significant investment in the state of Missouri and underscore our commitment to providing competitive, affordable education to Missourians.

"The grants use a combination of federal, state and institutional resources to meet the cost of tuition and fees at Mizzou. Not all of those funds will come from Mizzou."

McCune said officials estimate the grants will cost MU about $5 million a year - but about $3.5 million will come from shifts within the university's existing $12 million annual need-based financial aid packages.

The rest is expected to come from savings resulting from cuts or changes in existing academic programs but would be new money for financial aid programs.

The University of Missouri was founded in Columbia in 1839 as the first public university west of the Mississippi River.

MU reports it was awarded land grant status in 1870 through the Morrill Act, which Congress passed and President Abraham Lincoln signed in 1862.

The 1890 Second Morrill Act awarded additional money to states - like Missouri - where policies or laws prohibited people of color from attending the 1862 school, with the extra money to be used at historically black colleges such as Lincoln University, which is an 1890 land grant school.

The Association of Public and Land Grant Universities explains on its website the 1862 federal law said the "original mission of these institutions was to teach agriculture, military tactics, and the mechanic arts as well as classical studies - so members of the working classes could obtain a liberal, practical education."

In announcing the new financial aid programs last week, MU said in its news release: "The compact means that thousands of Mizzou students will be able to attend the university tuition-free."

Morrice added: "We already know that the Pell Grant program is transformational for our students and opens pathways for many to attend MU who couldn't otherwise.

"These grants are intended to build on the Pell program and create competitive financial awards for all Missouri residents who qualify."

Most federal Pell Grants are awarded to students whose families make less than $30,000 annually. Pell Grants usually provide a maximum of $6,000 in higher education assistance annually, leaving significant gaps for some individuals and their families.