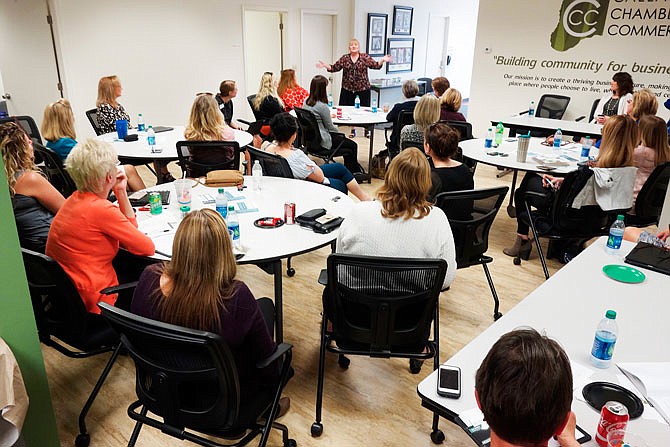 Jenny Gray/FULTON SUN Marty Martin-Forman, retired chief operating officer of the Fulton State Hospital and past president of the local chamber of commerce, speaks to a group of women at Monday's inaugural Callaway Women's Network.

For some women, the workplace can be a lonely place.

Circumstances at work can be overwhelming, and sometimes no one is available to help and advise.

At Monday afternoon's first meeting of the Callaway Women's Network, almost 30 women gathered to talk, share experiences and ask questions of each other.

The group is for all women, according to Tamara Fitzpatrick, executive director of the Callaway Chamber of Commerce.

"It's open to any woman who wants to participate, that is looking to enhance their networking and learn more about leadership in the community," she said. "To learn from one another."

Three women shared their experiences in depth at thegathering. Marty Martin-Forman is retired now, but was the first female chief operating officer at Fulton State Hospital and stayed in the role for 11 years.

Martin-Forman has 33 years of mental health experience with expertise in geriatric care. She's familiar with hiring and firing, client decisions, infection control and security. Recently, she has been in charge of the state-funded demolition of the old buildings and construction of the new facility.

When she had to make tough decisions, she had to determine if she could live with the results.

"I really became aware unless you do what you are doing with a set of principles, you aren't doing it very well," she said. "That's particularly important when working in a service area, taking care of people."

She spoke of several people she described as mentors.

"Al Anderson, he was the hospital management assistant," she said. "He would sit me down and say things like, 'If you want to be part of this community, you need to get in the community.' The other thing is, 'You'd better have a plan.'"

Martin-Forman said her first supervisor at the state hospital had her write down five goals.

Bondurant is a Westminster College graduate with a masters degree in English and creative writing. She started her career in bank marketing, but realized she would be happier on her own, especially as she prepared for her children.

"That's how I try to run my business," she said.

Kim Barnes, who also shared, became president of Callaway Bank in 2012. She graduated in 1986 from William Woods University and started at the bank as a lobby assistant, and eventually served as senior executive vice president and COO, with an appointment to the board of directors in December 2011.

"I was born and raised on a farm (in southern Missouri); I was driven by all that stuff," she said. "I appreciated my country life but I wanted more. I wanted to learn and expand my horizons. I was the first in my family to attend college."

From the start, Fulton and the William Woods campus felt comfortable to her, and she graduated in 31/2 years, Barnes said.

"I went to work at Central Electric," she said of her first job, managing the books for that business. But she wanted more, she said. She worked for her in-laws for a short spell, then applied at the bank.

"I walked into the bank and it felt like home," she said. "I was the lobby receptionist. I greeted people and directed them to where they needed to go."

In that capacity, she found stimulation, meeting people and working in an environment she described as "amazing."

"It was very encouraging, very supporting," Barnes said. "I can't talk enough about the people that are there."

She said the encouragement and support was without judgment.

Barnes said every woman has the potential to learn - and to teach.

"I firmly believe that everyone's a leader, whether you think so or not," she said. "Everyone's a mentor."

She encouraged those gathered to believe in themselves and encourage others to do the same.

That kind of strength and mentoring stands the test of time.

"I can be content in the most crisis filled moment, because that's where I know I'm needed," she said.

Forman said she still has that same list of goals, written down in 1980, and she has achieved most of them. Now retired, she has new goals.

"It took me two years to figure out who I was (after retirement), but that journey took me to a whole new set of goals," she said. "It's really about who you are."

More information about the new networking group is available through the Chamber, at 573-642-3055.

"This is about building women up in the community learning from one another," Fitzpatrick said.