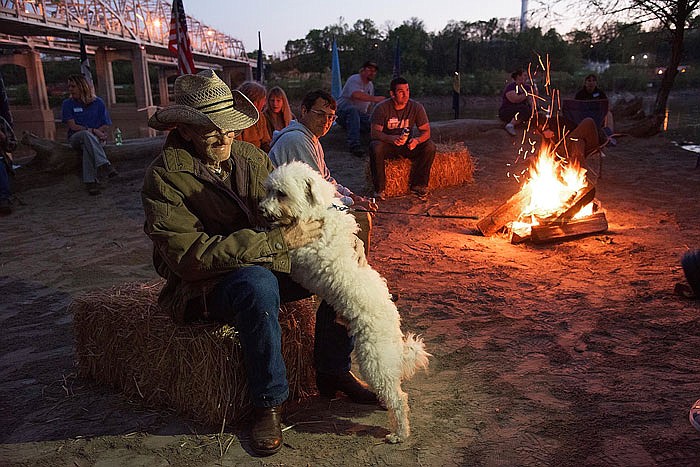 Joe Wilson is greeted by his dog, Teddie, last April after Wilson was released from the hospital after a long stay. Wilson was so happy to be surrounded by friends, a camp fire and his canine friends. Wilson and friends were on the sandy beach of the Missouri River the night before a scheduled canoe race the following morning.

From now on, the Jefferson City park along the north bank of the Missouri River that includes the Conservation department's Noren Access will be known as "Joe Wilson's Serenity Point at Noren Access."

Commission member Chris Wilson, who isn't related to Joe Wilson, made the name change motion, noting Joe Wilson had, as a private citizen, "dedicated countless hours working with the Jefferson City Parks and Recreation to create a gathering point for local families and friends, visitors, as well as the canoe, kayak, fishing and general river community."

Board member Bill Plank noted the decision recognized what people already have been calling the park.

"That's a huge testament," he said. "It really goes to show how much impact one individual can have. It's not just that land that he touched, but it's so many lives" in the community and nationally.

An email to the commission from Ken and Dee Landau of Kansas City praised Wilson's work in improving the area around the Noren Access, which the Conservation department opened to the public in June 2000 on city park land.

"We are canoe and kayak enthusiasts and have been visiting Noren Access via the Missouri River for over 10 years," the Landaus wrote. "Joe Wilson is single-handedly responsible for transforming the area around the boat ramp from a dismal location to a welcoming site of beauty and peacefulness.

"By pouring his heart and soul into creating this magnificent setting, Joe Wilson has not only been a terrific ambassador for Jefferson City but has created a reason to visit the City and to enjoy the natural beauty of the River and Noren Access."

The commission's vote came less than six hours after Wilson died following a several months battle with prostate and bladder cancers that had moved into his lungs, his son, Justin Wilson, told the News Tribune.

Justin Wilson and three of Joe's grandchildren told the commissioners they appreciated the name change.

Justin Wilson also said he and his brothers already have talked about making "efforts to get over there and make sure that place stays clean," which was one of Joe's biggest, self-appointed tasks.

Second Ward Councilman Rick Mihalevich told the board their vote "touches a lot of people who have been a part of the river."

Jennifer Battson Warren, Conservation's deputy director for business, told the commission in an email the department supported the renaming.

"The department rarely sees Joe's kind of commitment to the projects we help communities provide," she wrote. "It will be hard for anyone to argue that he had a deeply sincere interest in helping everyone connect with the river and the outdoors."

Commission Chairman Brad Bates added: "It's rare when you see a citizen who just grabs a project, with no ulterior motive other than his love of the thing he's working for - and won't take 'no' for an answer."

Steve Schnarr of Columbia, with the Missouri River Relief group - which spends a lot of time working to clean up the Missouri and its banks, and to appreciate the river's recreational uses - told the Parks and Recreation commissioners: "We work in all kinds of communities, from St. Louis to Omaha.

"And there's no (other) place where some person has just dived in because they wanted people to enjoy the river. There's no place like it anywhere - you guys are lucky as a community."

There's a section of a big, dead tree on the river bank children visiting "Serenity Point" often climb on, Schnarr noted, reminding the board that Wilson saw that tree floating in the Missouri and "hauled it up with his boat because, 'Kids might climb on that.'"

Sooner or later, he said, everybody had run-ins with Wilson.

Gates first worked with Joe Wilson when he was trying to convert the old Cedar City School into a shelter for rescued animals, a decade ago.

In addition to cleaning up and "decorating" the park land next to the boat ramp, Wilson actively promoted a walking trail in the area which also had been a part of the Chamber of Commerce's "Transformation" project.

While others, including former school board member Alan Mudd, helped raise money for it, Wilson was a constant presence as the Parks department staff planned it.

"He knew the lay of the land - what people did and how they used the place," Gates explained. "We listened to him.

"We probably didn't put it in exactly where he thought it should go."

People should remember Wilson most for his promoting the park and his love of dogs, Gates said.

Parks Director Todd Spalding said they're still developing a timeline for when the name change will be shown in signs or a plaque at the park.

Justin Wilson agreed his father "bumped heads with a lot of people - but he still had a heart of gold."

He reminded the board his father's usual parting words were: "See you at the river."