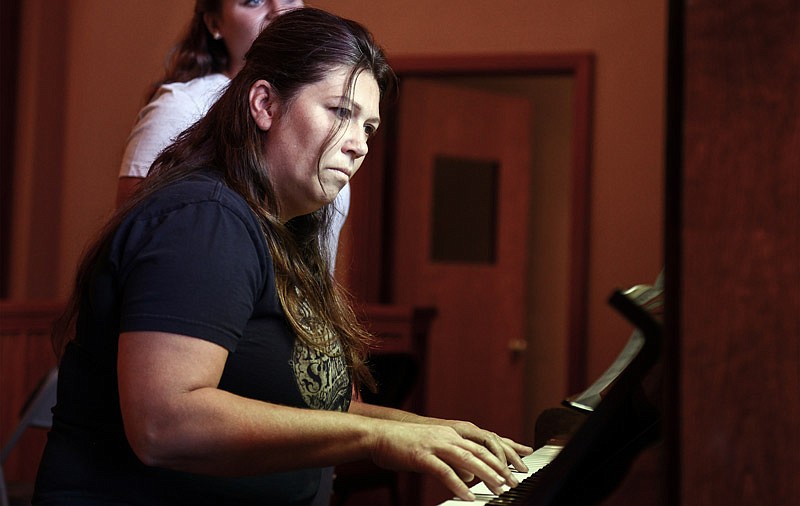 Rebecca Talbert sharply focuses her eyes on a scale sheet while playing the piano.

A new local opera company isn't waiting for an opera house to share its talents.

MOstly Opera is having a fundraiser 6:30-9:30 p.m. Sept. 17 at Canterbury Hill Winery to raise money for its debut concert "Hansel and Gretel" with the Jefferson City Symphony Orchestra.

Tickets are available for sale starting today at Capital Music or at the door for $20 per person and $30 per couple.

MOstly Opera and the Jefferson City Orchestra are holding a joint performance.

MOstly Opera is a group that provides opportunities for opera performances and education for everyone including high school students.

There will not only be a concert, but also a silent auction, dessert auction and a wine pull to help proceeds.

The silent auction will have gift baskets from various businesses, Mizzou tickets, spa items, winery items and donated items from the public. The dessert auction will also have various desserts to bid on.

MOstly Opera is excited for the show.

"Come support us so we can have opera in our city. Keeping opera alive is our mission, and I know opera can be for all ages," Riggs said.

"The Opera by the Bar singers can really help introduce the general public, because people aren't familiar with opera and it can actually be more relevant to the day," Riggs said.

Once the fundraiser is over, auditions to be an Opera by the Bar singer or to perform in "Hansel and Gretel" by Engelbert Humperdinck are 6-8 p.m. Sept. 22 at Faith Lutheran Church and 2-5 p.m. Sept. 24 at Our Savior's Lutheran Church.

Riggs said she and MOstly Opera are looking forward to donations, performances and auditions.

MOstly Opera is ready to take on the journey ahead.

"We are hoping to bring in cash and would love to do opera in town and get started as soon as possible," Riggs said.

As well as becoming an opera house, they are looking for new board members.

"If we could find people willing to work with us soon, I would love to have them come see us," Riggs said.