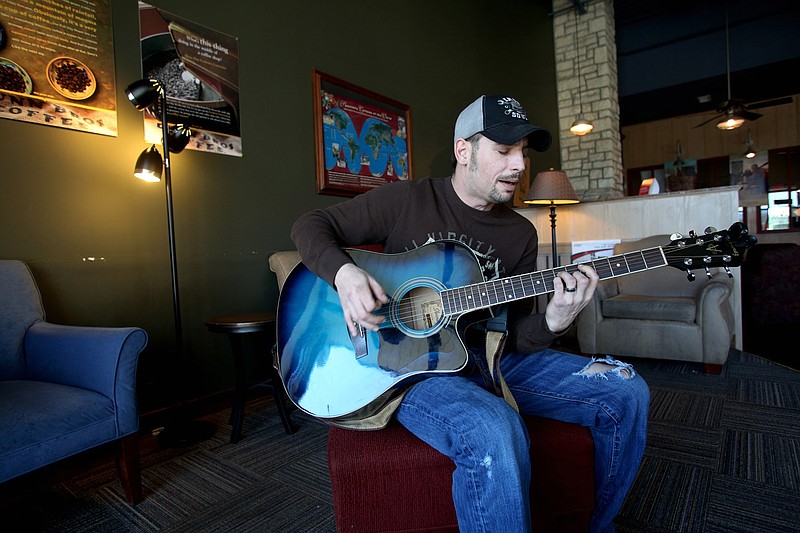 Billy Jack Purnell plays his music Feb. 20 at Dunn Bros Coffee on Edgewood Drive in Jefferson City. The local musician was recently amongst 50 undiscovered musicians selected in a Nashville 2016 New Artist Draft. Purnell said he just "plays what he feels," and he never predicted his music would gain the following and recognition it has received.

Billy Jack Purnell's rural Missouri life has taken some ups, downs and sideways turns - sometimes literally. Through it all, he has chronicled his experiences in song.

After a series of unexpected events, Purnell is now among 50 unsigned artists in the Tunesmith Entertainment Nashville Draft. Similar to the NFL draft, Purnell and the other artists will be selected by national brands and major businesses during the CMA-fest (Country Music Association) in June.

Once paired with a business or brand, they will have joint opportunities for cross-promotions and partnership.

"The company gets more marketing, advertising, business and exposure; the artist gets the same and at a national level," Purnell said.

In the meantime, Purnell will travel to Nashville twice, making a music video each time of original songs. This helps the unknown artists to build a portfolio to showcase their talent.

What Purnell needs now is local community support. The Tunesmith program invites businesses in the draftee's home area to sponsor him, host concerts and otherwise support him in the time leading up to the draft.

A Clarksburg native, Purnell, 36, is a state-certified welder at Delong's Steel Inc. in Jefferson City.

His music story begins 20 years ago when a near-fatal car accident sent him off a cliff near U.S. 54 and Route C. While recovering from a wheelchair, Purnell picked up a guitar and taught himself to play by following along to the radio.

Soon, he was writing his own lyrics from life experience, calling his style "plain and simple."

"My life became very colorful, and I put it all in my songwriting," Purnell said. "I've always been brutally honest in my writing, partly as it's like a diary and therapeutic and because I never had any desire or intention of others hearing it."

His first song was about his first marriage and first child. For eight years, his musical journaling included drugs, fighting, bad relationships and legal trouble.

"I felt like you should write about something you know," Purnell said. "I could not write about being rich, but I could tell you about insufficient funds and hard times."

With a couple of friends, they put together a nine-track recording in 1999 but only made three copies. It was more of a farewell affair, as they were going their separate ways, he said. He still never expected anyone else to hear his intimate music.

"Mine was locked away tight," Purnell said.

Soon, a stranger showed up asking for a copy, apparently computers and burning CDs had taken the recording outside the trio, he said.

He kept writing, and in 2001, he made a 12-track recording of acoustics called "Acoustaceuticals."

"So much more had happened," Purnell said.

For example, the Moniteau County Sheriff's Department showed up at his home while he was at work. Although he wasn't charged and what they were looking for wasn't there, the event made for the continually popular song "Simmons."

"It blew up and put me on the map musically," Purnell said.

He still wasn't fond of the idea of his personal stories being so public.

"But, I decided if there's an interest, why not entertain?"

At this same time, he was at the height of his addictions, and his marriage was at an end.

"I realized I was going to die or be in prison in the end; I would lose my children either way," Purnell said. "That's when I found God and changed my ways."

He is among the rare 3 percent who cleaned up from drugs without serious intervention. He detoxed on his own sofa in a different county with his children, he said.

When the judge gave him full custody of his children in 2006, she reminded him that was the easy part, and keeping them would be the more difficult journey.

His songwriting took a new turn, as reflected in the song "Redemption." He married again, added more children and was diagnosed with bipolar disorder.

That's how his third album, "Plain and Simple: Bipolar 101," got its name. And it describes his sound - mellow one moment and intense the next.

Continuing to reflect his life, this release had songs with "God and Jesus references" and talked about love, marriage and cleaning up.

However, it also had four songs from his older life, which kept the attention of his earlier following.

"It was transitional; I couldn't write drug and party songs anymore."

What Purnell has found from the countless messages and contacts from strangers across the Midwest is his story in song has helped many deal with things they're going through.

"That's got to be the most highest compliment," Purnell said.

He's played FanFair in Nashville, festivals in surrounding states and on air for radio stations as far away as Chicago.

The first time Purnell heard one of his songs playing the local radio, he said he was both happy and terrified at how many ears might be hearing about his life's story.

Also, at his New Year's Eve show at Bub's in Apache Flats, the elbow-to-elbow crowd was singing along to some of his original songs.

The Tunesmith Draft presents a potential opportunity to eventually support his family through his music. Although that would be great, he said, he would be "just as happy growing old picking on the front porch."

Purnell's life took another unexpected turn in 2013, when his second wife left him with four children while he was recovering from back surgery. It was a rough time and the closest he's been to a relapse, he admitted.

"I didn't stumble; I kept focus," Purnell said. "I didn't want to be in a position to risk my children."

Today, he is married to Jamie, his teenage sweetheart. For her, he wrote "Testify," which is on his fourth and most recent album, "Billy Jack Purnell: Plain and Simple."

"I've lived a lot in 36 years," Purnell said. "It's funny, if these events had not happened, these songs would not have made it.