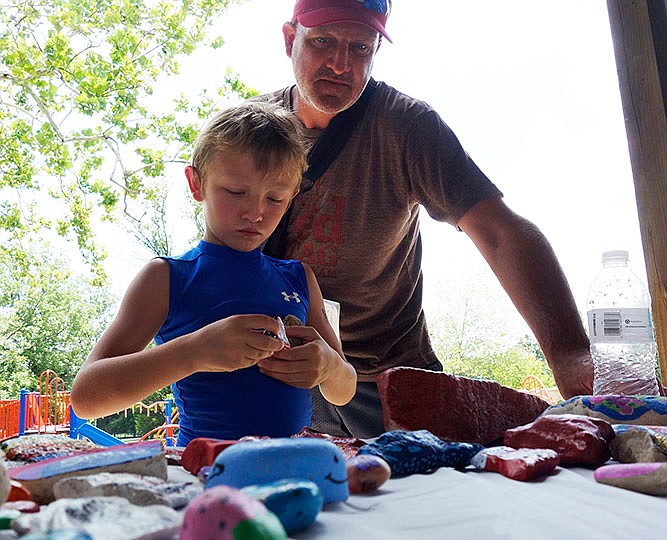 Anthony Nichols and his son, Eli, 8, look over a bunch of painted rocks that will be 'set free' soon as part the Fulton Rocks movement.

Charity Blair created the Facebook page JC Rocks a few weeks ago, and its membership has skyrocketed from around 3,000 people in early July to its current 9,600-plus.

Members of the JC Rocks group frequently post pictures of the painted rocks they've found around Jefferson City or that they plan to hide themselves for others to find. The idea of the game is for those lucky enough to find these painted rocks to either relocate them later or make their own to replace it.

"I had no idea it would take off like this; I hoped it would inspire other people," Blair told the News Tribune previously.

Turns out, it did.

"I can't believe how fast it took off," she said. "I just started the Facebook page and asked people to paint rocks and put 'Fulton Rocks' on them."

Staats and her children, then others, have been painting their fingers off for days and venturing out secretly onto the streets of Fulton. They hide their nuggets in plain sight, imagining the looks of delight as each rock is discovered.

"We got our inspiration for the idea from JC Rocks," she said. "It originated in a small town in Oregon as 'Love Rocks.'"

The rocks are decorated using a variety of mediums such as acrylic paint and markers and sealed with Mod Podge. Staats said she's painted about 100 rocks herself so far.

"We find rocks down at the creek and in different places, and the Fulton Clothes Cupboard has a free rock bin out front so people can get rocks there," Staats said.

Others have joined with Staats to cover the city with cheerful, painted rocks. Fulton resident Anthony Nichols showed Staats an online post of two rocks someone had just found.

"I did these Saturday night," he told Staats, "and it took this long for them to find them."

He said on the first night he hid rocks at about 30 locations.

"I've been out of work because I had surgery on my shoulder," he said. "This gave me something to tinker with while I was out."

Staats said she hopes the movement keeps on going. "I was hoping it would last until Christmas time so I can decorate them like that," she said. "It's a welcome distraction from all the negativity in the world."

Tasha Winkler started the Cali Mo X-treme Rocks Facebook group after her daughters, Cadence and Haley, took home a handful of painted rocks from outside a Jefferson City store.

When the Winklers returned to their California home that day, their dining table - which usually is immaculate - was covered with rocks and paint. Cadence, 11, prefers to be creative, whereas Haley, 10, is more interested in the discovery surprise.

"Within a week, (my phone) was filled up every day," she said of the frequent posts by California rock painters and seekers.

One of the posts to the California group page was the original story of how this international trend started.

An Oregon couple lost their two daughters in 2013, when they were hit by a car in front of their house. In April 2014, the couple launched the Love Rocks Facebook page to honor their memory with heart-decorated rocks, similar to how the couple had decorated their wedding.

"I felt where they were coming from," Winkler said. "They were trying to do something positive amongst something terrible."

Just like the California group was born from seeing the trend in Jefferson City, so it has spread across the nation and around the world, she said.

In California, church youth groups plan to do rock painting as a project, and many families have spent time together.

As for the Winklers, their motivation is simply to make someone else's day better, she said.

"A lot of groups have rules; we don't," Winkler said. "We just want people to have fun."

However, the Winklers have been painting the Facebook logo on the bottom of their rocks to send the finders to the group's page.

Some families have taken evenings to go rock hunting in California. Then the next night, they hide the rocks in new locations, Winkler said.

"When I put out a rock, I feel like I'm going make someone's day," Cadence said.

Jenny Gray and Michelle Brooks contributed to this article.