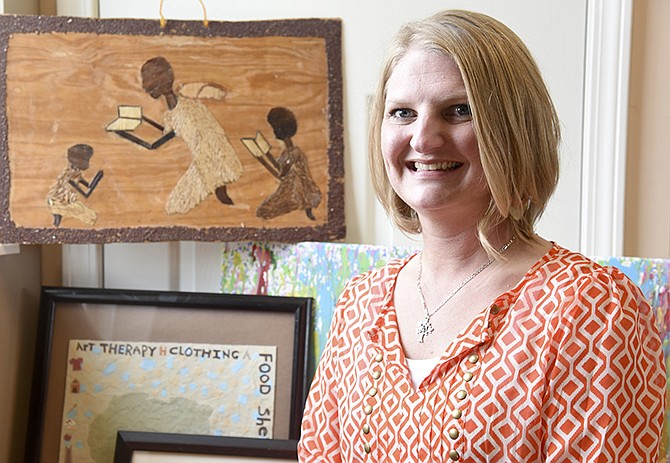 Crystal Burgen sits in front of HALO art therapy pieces made by students in the program. Burgen is the new director of HALO

Since May, a Jefferson City native has been leading the Helping Art Liberate Orphans (HALO) organization in the Capital City.

Crystal Burgan, a 1998 Jefferson City High School graduate, said her passion to help others lead her to HALO, which has the mission to provide "healing, housing and education to youth in the greatest need." HALO Jefferson City currently has three young women in its Transitional Living Program (TLP), designed to lead them to self-sufficiency through education while providing them with a safe place to live for a maximum of 24 months.

HALO-conducted research found that there are 130 homeless youth in Jefferson City at any given time.

Burgan attended Northwest Missouri State University where she earned a degree in international business. Then, she went on to University of Missouri-Kansas City and graduated with a master's degree in public administration with an emphasis in nonprofit management.

In her sophomore year, Burgan enlisted in the Missouri Army National Guard. Her enlistment ended in 2013 after 12 years in the service.

"I've always wanted to serve my community and the National Guard was a great fit for that," she said.

While in the military, Burgan started in radio communications in a medical unit. She reached the rank of staff sergeant, and once went on a peace-keeping mission in Kosovo of southeastern Europe.

She transitioned into human resources, bringing her to the National Guard headquarters in her hometown. One of the highlights in human resources was working with the state partnership program, which connects Missouri and Panama for a mutually beneficial relationship.

Working with the program's director, Burgan traveled to the Latin American country multiple times for missions.

"Traveling abroad changed my life," she said. "It gave me a sense of appreciation for the different cultures and backgrounds from which people come."

Now, she leads HALO performing many duties: working to expand programs, promoting community awareness of the homeless youth in Jefferson City, cultivating community partners, collaborating with other organizations to fill in any gaps, and creating and empowering a growing team, which includes lead residential supervisor Lauren Bateman, volunteers and interns.

She's looking forward to a big move. The organization is moving into the former Rickman Center, now HALO Home Jefferson City. The new space will allow HALO to bring more girls into its TLP and combat the homeless youth crisis locally.

In order to continue its mission, HALO Jefferson City needs community support, Burgan said, and there are many way to get involved: holding fundraisers, purchasing tax credits, participating in the monthly pledge and donor program, and volunteering with HALO Home Jefferson City and performing duties like outdoor landscaping.

HALO Jefferson City is an 80-20 organization, meaning that 80 percent of donations go directly toward its services. It also supports a girls home in Kampala, Uganda, where 20 girls live.

Burgan said being the director of HALO Jefferson City is a dream job.

"I'm right where I'm supposed to be," she said.