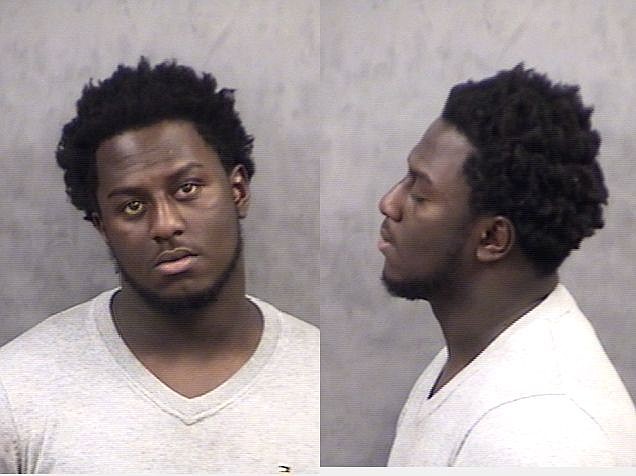 This mugshot of Missouri football player Terry Beckner, taken after his arrest Jan. 20 for possession of marijuana, was provided by the University of Missouri Police Department.

COLUMBIA, Mo. - Terry Beckner Jr. is suspended indefinitely from the Missouri football team after being arrested Wednesday night for possession of marijuana.

"I'm disappointed to learn of Terry's actions," Missouri coach Barry Odom said in a statement. "We take this very seriously and in line with our department policies, Terry has been indefinitely suspended and will face team disciplinary measures."

Beckner was pulled over at 9:34 p.m. Wednesday at the intersection of Conley and Missouri avenues for driving with his headlights off, according to Maj. Brian Weimer of the University of Missouri Police Department. The officer smelled marijuana inside the car and found a clear Ziploc-style bag containing fewer than 35 grams of marijuana.

Beckner was arrested before being booked and processed at the University of Missouri Police Department.

He was released on summons.

"I don't want this incident to be viewed as a representation of our athletic department or football program, but we certainly understand the impact one poor decision can have," Odom said. "While this behavior is not acceptable, this is a very challenging societal issue that is dealt with everywhere on a daily basis, and we will use this as a learning opportunity for Terry and our program."

Beckner had an immediate effect on the Missouri defensive line as a true freshman. He racked up three sacks and 27 tackles - 13 solo and eight for loss, best among Missouri interior linemen. He was named freshman All-America by Sporting News, USA Today and the Football Writers Association of America and was a member of the all-SEC freshman team.

Beckner was one of four Missouri players involved in a car accident in September. Beckner, the driver, was the only player in the car to play in a win against Connecticut the following day. Five individuals were transported to University Hospital after the accident at the intersection College and University avenues, though no injuries were life threatening.