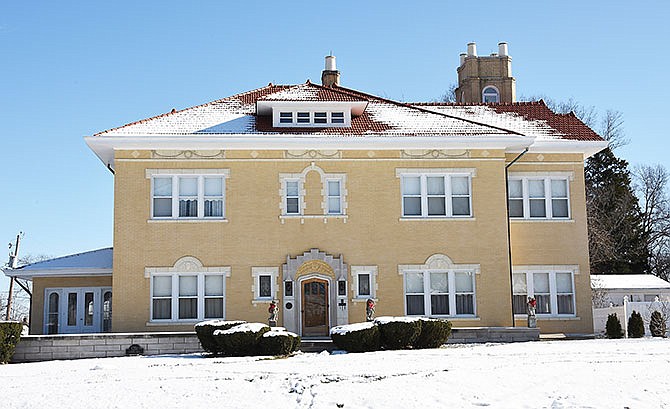 The Louis Ott House at 1201 Moreau Drive is one of Jefferson City's more recognizable historic homes.

A cornerstone of Jefferson City's eastside neighborhood, born of the streetcar and expanded Capitol grounds, the Louis Ott House at 1201 Moreau Drive is a symbol of the early 20th century affluence.

Builder and businessman Louis Ott invited many from the public into his home and the park behind it for more than 10 years, hosting father-son dinners, birthday celebrations and parties for those with special needs. 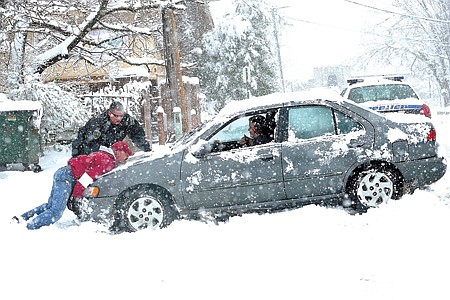 Rose Millwee of Fayetteville sits with her dog, Maximus, as she attempts to return her car to her parking spot at her home Sunday on North Church Avenue in Fayetteville with help from Charlie Birchfield, left, and Sgt. Chris Moad of the Fayetteville Police Department.

Louis Ott was known as the "lumber doctor," from his articles published across the Midwest, followed his father Philipp Ott in the lumber business.

Philipp Ott immigrated from Bavaria in 1849 at age 18. He married Elizabeth Wippenback in 1853 and the couple moved from St. Louis to Marion, where Philipp served as postmaster for 25 years.

The Ott family's lumber business, the foundation of today's Scruggs Lumber Company, was located at the corner of Capitol Avenue and Jefferson Street, beginning in 1882.

Louis Ott was born in 1869 in Marion and by age 13, he was working with his father. He served Jefferson City later as a firefighter and city councilman.

His first home was in the 200 block of Jefferson Street. He married Hilda Wagner, cousin to his Moreau Drive subdivision partner. The couple had two children, Elmer and Irene, for whom the avenue Elmerine was named.

Ott built his "luxurious" family home at 1201 Moreau Drive in 1930. The Italian-Renaissance style is rare in Moreau Drive, but Ott's home is a "solid example," the State Historic Preservation Office neighborhood survey said, calling it "arguably the grandest home in the neighborhood."

Then, he built substantial homes for his children's families nearby at 1117 and 1119 Moreau Drive.

He also designed Ott Park on Elmerine Avenue, including a playground, pond, island and cave.

In addition to being named a city Landmark in 2004, the Louis Ott Home was determined eligible for the National Register of Historic Places.

The 2008 state survey identified three other homes in this area eligible for the register among 274 houses.

"The homes built by the Otts for themselves reflect the transition from simple, affordable architecture to elite paradigm architecture," Rachel Spillars wrote in "Southern Magnolias in the Neighborhood."

The Moreau Drive area was home to the city's wealthiest and most prominent families.

Before the early 20th century, the undeveloped site was used as the Lincoln Institute Farm and the county fairgrounds. And, as one of the highest points of the city's outskirts in 1864, it was an ideal location for Union scouts to monitor the confederate advance led by Gen. Sterling Price.

Louis Ott was one of the principal developers, along with George W. Wagner and Mayme Vineyard, the survey said.

Wagner place was the first subdivision, plotted in 1912, designed on the old fairgrounds site, Atchison to Fairmount and Moreau to Oakwood.

Ott partnered with Wagner by the next year, 1913, to buy the Lincoln farm. But it was not platted until 1916 to develop Fairmount Place subdivision, including Elmerine and Moreland avenues.

The quick growth of this area, warranted the construction of Moreau Heights School, now the Moreau Montessori School, in 1914 and McClung Park, originally state-owned, in 1915.

Ott even built a playground in Fairmount Place featuring a lake, island, cave and 100 pine trees, the survey said.

Vineyard Place rounded out the Moreau Drive neighborhood, built in the late 1920s south of the other two subdivisions.