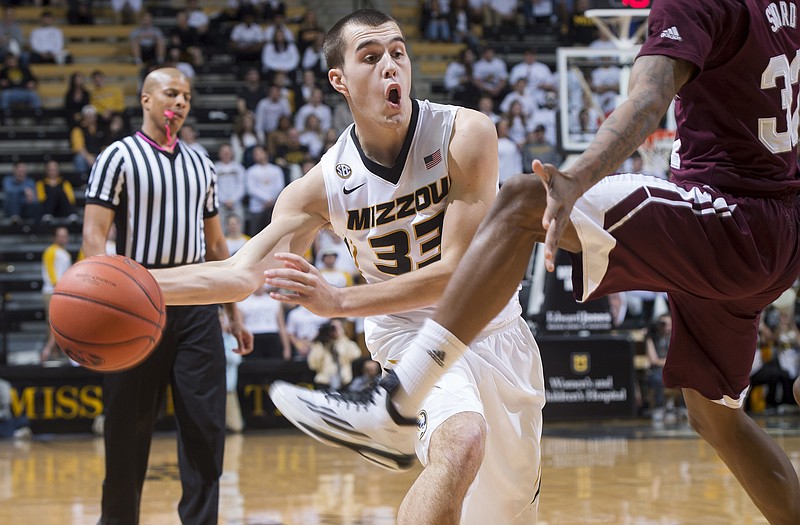 Cullen VanLeer of Missouri passes the ball around a Mississippi State defender during Saturday's game at Mizzou Arena.

COLUMBIA - When a team is threatening to post 20-plus losses for the second straight season, sometimes the best solution is the most obvious one.

Coming off a putrid shooting performance Saturday against Mississippi State, the Missouri men's basketball team has shot worse from 2- and 3-point range than any other team in Southeastern Conference play.

Missouri made just 2-of-25 3-point shots against the Bulldogs and shot 37 percent from the field overall. Anderson said some misses could be attributed to shot selection, especially late in possessions, but when he watches the tape, he doesn't see that as the biggest problem.

"Everybody needs to get in the gym working," Anderson said. "Does that automatically mean you're going to make shots? No. But you've got a better chance than you do being on Twitter or playing video games. At least you're shooting."

Kevin Puryear believes the Tigers have some improving to do in that regard.

"I would say that collectively we're not putting enough time after practice," he said, "so we definitely have to tighten that up. We had ... a bunch of guys in the gym (Sunday), which was great to see, so we're trying to make those improvements, and hopefully we can come out and shoot better next game."

As a forward, Puryear isn't exactly the issue when it comes to missing 3-pointers - though he was held to just two points against Mississippi State. And to Puryear's credit, Anderson said, he and other freshmen have done a good job of putting in extra time.

"I mean, you can come in here at 2 in the morning and K.J. Walton might be over here shooting," Anderson said.

"God bless Cullen," Anderson said. "He's struggling shooting, but it isn't because of lack of effort. He's over here working at it. (Freshman) Terrence (Phillips), Kevin, those guys are in the gym working."

Phillips was surprised by the poor shooting night Saturday.

The Tigers will look for just their second SEC shooting performance of 40 percent or better today against Mississippi. The Rebels have allowed opponents to reach that mark in all but two conference games.

Mississippi is paced by Stefan Moody, who leads the SEC with 23 points per game. Moody matched that mark in the teams' lone meeting last season, a 20-point Mississippi win at Mizzou Arena.

"(He) is a tremendous player, probably one of the premier guards in our league," Anderson said. "He'll be a tough matchup. ... He has the ball in his hands a lot, so you have to try to do a good job of keeping him from getting open looks. He does a good job of driving the basketball, gets to the free-throw line a lot, so ... we've got some ideas on maybe how to slow him down. I don't think you're going to stop him."

Moody missed the Rebels' Jan. 23 loss to Mississippi State with a hamstring injury, but he put up 24 points against Auburn in his return before being held to 10 Saturday against Kansas State.

The Rebels will likely be without Sebastian Saiz today, the Clarion-Ledger reported. Saiz has missed Mississippi's last four games with an eye injury. The junior has averaged 12.8 points and 9.8 rebounds per game this season, which rank second and first, respectively, for Mississippi.

This continues a trend for Missouri, which recently played Texas A&M without Tyler Davis and Mississippi State sans Gavin Ware - both of whom are big men averaging double figures. The undersized Tigers couldn't take advantage, however, and lost both games.

Notes: Missouri is shooting conference-worsts 37.8 percent from the field and 29.6 percent from 3-point range in SEC play. ... The Tigers struggled against Mississippi State's zone defense Saturday. "If Ole Miss didn't zone us," Puryear said, "I'd be really surprised." ... Anderson said he expects suspended sophomore Tramaine Isabell to return soon, though he doesn't know if that will be in time for today's game.