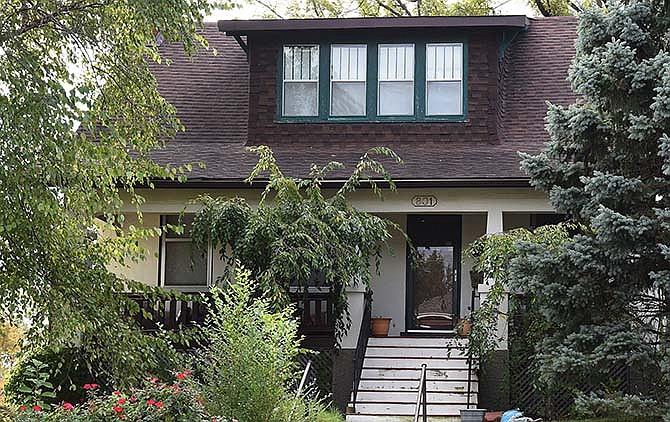 The residence at 801 Washington St. was named a Jefferson City Landmark in 2007

Once one of many, a German cottage at 801 Washington St. in Jefferson City was home to a clergyman's widow while raising their six children.

Henriette Rieger was born the daughter of Nicolaus and Anne Marie Wilkens in Bremen, Germany, and immigrated through New Orleans, Louisiana, as a newlywed in 1845 with her husband Joseph Rieger. They lived in Gravois, Missouri, until about 1848 and Holstein, Missouri, until moving to Jefferson City about 1860.

"The widow Rieger was a very influential person in the early life of Central Church," said South Side historian Walter Schroeder. "Although a woman and widow at a time when women's voices were quieted, she asserted herself into congregational affairs with her well-educated, "aristocratic' bearing."

The Rev. Rieger was revered as a near saint, Schroeder said. He was the first resident German Protestant pastor in Jefferson City, serving at the then-Central Evangelical Church from 1860 to his death in 1869.

Rieger was one of the founders of the German Evangelical Church of the Midwest, which through mergers ultimately became the United Church of Christ.

During the Civil War, Rieger was chaplain at the Missouri State Penitentiary. And with his wife Henriette, they cared for war wounded in their home.

Rieger also was among the founders of Lincoln University, serving on its first board of directors and recognized on the university's Veterans Plaza memorial.

When Rieger died in 1869, the congregation continued to pay Henriette her husband's salary after she had moved across the street from the parsonage to 801 Washington St., Schroeder discovered while translating the church's original minutes from German to English.

The red brick cottage with limestone foundation had been built by 1869, when Henriette moved with her children Julia, 22; Clara, 18; Henriette, 16; Emma, 14; Lydia, 11; Joseph, 8, and Nicolaus, 5. Six of the couple's nine children lived into adulthood.

Two of their sons became Evangelical ministers, and a daughter, one of the first graduates of the new Jefferson City public schools in 1869, was a long-time school teacher. Their other daughters included the church organist and music teacher and a well-published author.

The German cottages took advantage of the hillside, Schroeder said. The kitchen and dining room in each of these homes were in the lower floor with a ground entrance, as well as a main floor entrance to the parlor and bedrooms. The attic was for the children.

"It is an excellent example of making an old building continuously livable over the years," said Schroeder. "Originally, it was almost a carbon copy of the Hess House catty-cornered from it and also the Buehrle house just down Washington Street. Several blocks around Central Church were composed of these German cottages built by German immigrants."

German immigrants from Muenchberg, Bavaria, began arriving in this area in the 1840s.

But by the 1970s, the neighborhood of Old Munichburg had begun to deteriorate. Efforts to preserve the German roots grew in the 1990s.

The Rieger House was not included in a National Register of Historic Places nomination of 20 properties from the South Side area. But it was named a City Landmark in 2007.

"The house lies in the heart of Munichburg," Schroeder said in his nomination.

The home's historical significance is tied both to the neighborhood church across the street and as an example of 1920s Arts and Crafts architectural style remodeled from an original 1860s German cottages.

Henriette Rieger lived at 801 Washington St. from 1869 until the early 1880s, when she moved to Washington, Missouri. She and her husband are buried in the Central Evangelical section at Riverview Cemetery. Their original tombstones are displayed inside Central Church.

The Nicholas Bassman family, also members of Central Church, lived at 801 Washington St. in the early 1900s. Then, the Louis Stuiber family lived there in the 1920s and 1930s.

Stuiber likely was responsible for the renovations to convert it to the Arts and Crafts style, when the red brick and limestone foundation was stuccoed. The small front and back porches were expanded to full-width porches.