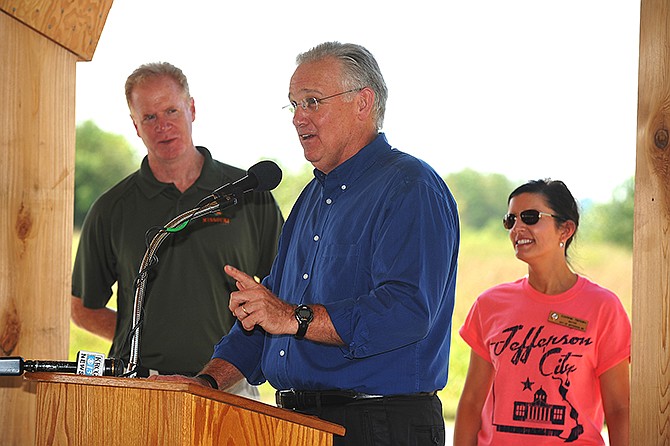 During a press conference Thursday recognizing the 25th anniversary of the Katy Trail, Gov. Jay Nixon, middle, announced the trail's 47.5-mile extension. The new stretch will run from Windsor to Pleasant Hill which is located in central western Missouri. He was flanked by Bill Bryan, director of Missouri State Parks, left, and Jefferson City Mayor Carrie Tergin.

The nation's longest rail-to-trail conversion is about to get even longer.

Gov. Jay Nixon announced Thursday that a 47-mile stretch of the Rock Island Trail, from Windsor to Pleasant Hill, would be added to the existing Katy Trail by the end of 2016, bringing the already lengthy stretch of trail up to 287.5 miles across Missouri.

"As outstanding as the Katy Trail is today, we are committed to making it even better," Nixon said. "We're going to go get that done."

Nixon said the Katy Trail is one of the "true gems of our park system" and generates nearly $18.5 million per year in economic impacts.

The Katy Trail is now 25 years old and stretches across almost the entire state. Nixon said since 2009, there has been $4.5 million invested in improvements for the Katy Trail, including spurs and bridges.

"Protecting and extending the Katy Trail has been one of my priorities as governor and, quite frankly, throughout my career in public service," Nixon said. "The bottom line is these are great opportunities for all."

A further Rock Island rail-to-trail conversion is also being discussed, but has yet to substantially move forward. The full Rock Island corridor is a 144-mile stretch, from Kansas City to near St. Louis, and, if connected to the Katy Trail, could create more than 400 miles of a continuous trail.

Several residents who live along the Rock Island corridor oppose the conversion, saying the property - which was originally granted to the rail company by easement - should revert to the landowners.

However, the conversion of the railway to trail is legal due to railbanking, a federal provision designed to preserve rail corridors for potential salvaging. Tracks and ties are removed from the railway, but the passage itself is kept intact in the form of the trail.

If a rail company could prove customers have a demand for service, the trail could be reacquired from the state and turned back into a railway.