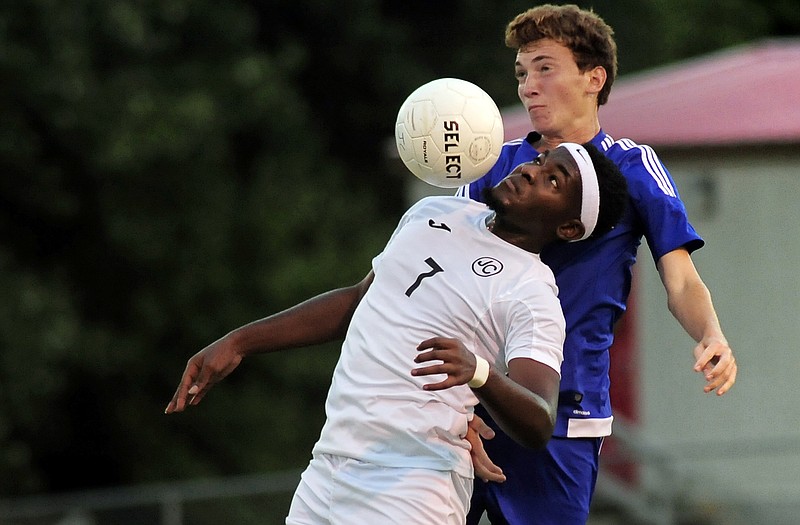 Jefferson City midfielder Romando Thomas battles Quincy defender Collin Burgtorf for possession of the ball in the Jays' half of the field in the first half of Wednesday's match at 179 Soccer Park.

Wednesday's game between the Jefferson City Jays and Quincy (Ill.) at 179 Soccer Park looked to be a pairing of two evenly matched soccer teams.

Even when the number of players on the field wasn't.

The final score was even as well, a scoreless tie that ended without overtime. Quincy, which lost a player to ejection with 26 minutes to play, missed a penalty kick off the crossbar that likely would have secured a win with 5:54 to play.

"What started out as a pretty solid game turned out to be kind of a bizarre night in my mind," Jays coach Eddie Horn said. "I think they had five yellow (cards) and a red. The game was really choppy because of that. It was just kind of an odd game."

The Blue Devils had the best scoring opportunity in the first half, but a whiff on an open-net rebound and a subsequent miss sailed high kept the game scoreless at 27:15.

The Jays had three strong scoring opportunities in the first half, two at the feet of Jordan Carron. With 12 minutes to go before half, Carron's tricky footwork sent his defender to the ground, allowing him to send a shot off that went just wide left of the goal. Six minutes later, he hooked a left-footed shot on goal from the center of the 18-yard box that was stopped by the goalie.

Logan Horn had the first chance of the game, a shot rocketed to the post that forced Quincy goalie Eric Lubbert to make perhaps his toughest save of the night just 4:10 into the game.

"I thought Jordan Carron was really good going forward tonight," Eddie Horn said. "He was the only guy that was really getting shots off and he was pretty dangerous most of the time."

The Blue Devils began the second half with an early scoring opportunity, firing a shot just right of the goal that drew "oohs" of concern, then relief, from the Jefferson City faithful.

The Jays fed a number of balls into enemy territory without making much noise, and Quincy responded with two dangerous feeds of its own.

And then came the ejection. A Quincy player drew a red card for dissent with 26:02 to go, forcing the Blue Devils to play a man down.

With such an even match up to that point, it looked as if the Jays might be able to take hold with an 11-10 advantage. Instead, Quincy began playing its best soccer of the night.

"They had to change their shape a little bit, and the thing that it did is it took their No. 3 (captain J.D. Sohn) and instead of playing in the central midfield where we were doing a better job on him, they started playing him at forward," Horn said. "And then he was finding a little space and he could turn and run at us."

After a Seth Stegeman header went wide and Skylar Richardson made some moves inside, Sohn registered two shots on goal in a span of 1:15, the first of which rocketed off the post.

Then came another yellow card against Quincy, a feed to Sohn near the net that Jefferson City cleared, and a pair of injuries to Blue Devil players - adding to the game's odd stop-and-go feel.

With six minutes to go, Quincy had a throw in from the Jays' right corner. Sohn took possession, planted to shoot from the back left corner of the penalty box and was fouled.

The Quincy penalty kick went left-center, striking the crossbar and flying upward to the delight of the crowd.

Jefferson City made one last push, with the best opportunity coming at 4:10 when Dalton Green beat the Quincy goalie to a 50-50 ball, sending it up in the air, where Carron corralled the rebound, only to have his shot stopped by Lubbert. The Jays squeezed in two more shots on goal, and Green tried to get a long shot off as time expired, but he was stopped by a Quincy foul as regulation ended.

The strange finish got even stranger, as the teams lined up to shake hands without playing an overtime.

"In Illinois, they don't play overtime," Horn said. "So with everything that was going on they said, "We're not playing overtime. We're getting on the bus and going home.' So it ends in a tie."

Zach Brooks had the shutout for the Jays, who beat Quincy last year at Quincy.

"For the most part it was a game that I guess was probably disappointing that we didn't win," Horn said. "Because I thought we could've. It's not like we were outclassed as all. We had chances, they had chances. Zach Brooks was pretty good in goal tonight, too. He took a lot of balls out of play, and then of course, they miss the PK with five minutes to play that could have did the business and ended it for both of us probably."

Due to incorrect information reported, this story has been updated. Justin Gerke scored a goal for the Jefferson City JV in the game.