Anderson says he would have backed basketball team's decision to strike 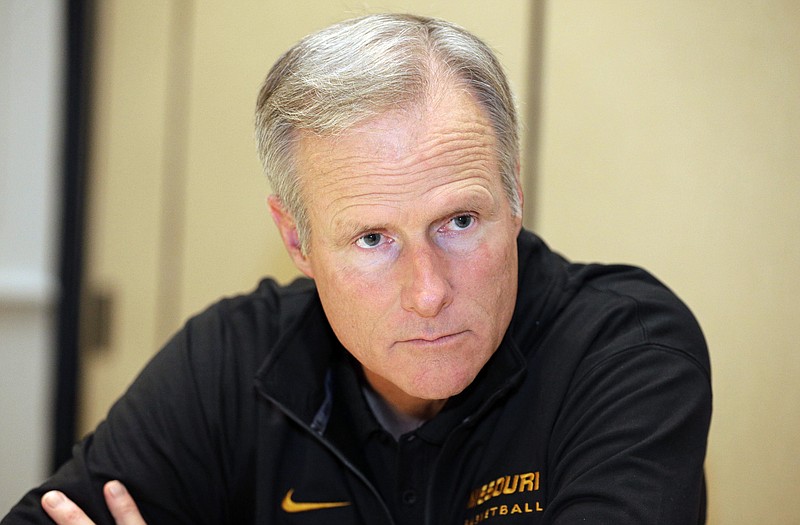 Missouri men's basketball coach Kim Anderson, shown here at Southeastern Conference media day last month in Charlotte, N.C., said he would have backed whatever his team wanted to do in regard to Jonathan Butler's hunger strike.

In the basketball team's first media availability since the football team announced a boycott of team-related events Saturday night, Anderson said his team met Monday morning to decide if it wanted to take action. The decision became moot when Wolfe announced his resignation shortly after 10 a.m.

Anderson said he intended to back whatever decision his team made.

"I wanted to support the guys," he said. "... Just make sure that they're fully informed of what they're doing, and that they're together as a group."

The four basketball players that met with the media Tuesday said the team had not reached a decision to boycott as well.

Director of athletics Mack Rhoades and deputy director of athletics Wren Baker met with the team at 1 p.m. Sunday to fill them in on the situation with Butler and on campus. The team had not had any personal interaction with Butler, who was refusing to eat until Wolfe was removed from office for his handling of recent racist events on campus. It was at that meeting Anderson offered support for whatever decision his team made.

"It was kind of like when he was recruiting me," freshman K.J. Walton said of Anderson's behavior. "He never changes. So it was great to have that support around us, and I'm glad he's our coach."

Walton said not every coach would agree to let a team coming off a 9-23 season forfeit games to begin the season. The Tigers' season opener is Friday against Wofford.

Of the three black players who met with media Tuesday, all were freshmen. They said they had not been the target of racism since coming to Columbia, with Walton saying it is "the best campus in the country, to me."

Ryan Rosburg, the only white player to speak with media, was also the only upperclassman. He said he had not noticed his black teammates having a different experience than him during his four years in Columbia.

"I can't speak for them, but I think that they've had a great experience," he said, "and I think that as a team we're close enough (that) if they were having a tough time that they would say something to me, to the coaches or someone like that, and we could address the situation. But I think that for the most part there hasn't been any issues."

Rosburg did acknowledge Missouri athletes often function in a bubble separate from the rest of the student body.

"I mean, we just go to class, go to practice, and that's about it, so we're not as much involved in the student population," he said. "I think that we kind of have our own family, and we kind of do our own thing a lot of the time."

Anderson, who has played or coached at Missouri in four different decades, said he has never had a player come to him with concerns about racism.

"I know that situations exist that I have read about recently," he said. "I've never really had a lot of communication with guys that have expressed that to me. Now, having said that, I'm not naive. I do know that we as a campus have problems, we as a nation have problems, so I think that it's important that from this situation that we learn from it. Hopefully healing has begun, and hopefully we can use this to bring our campus community closer together."

Anderson said he spoke to the parents of all the players in his upcoming recruiting class about the recent events at Missouri.

"I've kind of explained the situation here," he said. "And it doesn't seem to be any problem at this point."

Rosburg said he is friends with some of the football players, and he briefly spoke to a few about how the boycott began.

"There was a group of guys who were first involved," he said, "and they kind of shared their views to the rest of the team, and then everyone supported each other."

Rosburg said the football team appeared united in its support of Butler.

"I think that, whether or not they all agreed on it that their team bond was more important than their personal beliefs," he said. "And I think that's pretty powerful.

The football players' stance gave the basketball players a sense of what kind of power college athletes have. Butler's strike, backed by protest group Concerned Student 1950, became a national story when the football team offered its support.

"I think someone said that if the football team wasn't involved then it wouldn't have happened," Rosburg said. "Whether that's true or not, I think that shows how powerful it is. I think people have said, too, how this is a platform for future (causes), whatever it may be, paying athletes or whatever it is."

Hours after Wolfe announced his resignation, chancellor R. Bowen Loftin, who faced similar criticism, said he would be stepping away from his position at the end of 2015.

"I think that you could tell that these are two men who really cared a great deal about the school, about the university," Anderson said of Wolfe and Loftin. "I think you could tell that from some of their remarks yesterday. I didn't get to hear all of them, but I think both of them put what's best for the university and the campus before themselves. They did what was best for the university and for the campus. I'm appreciative to both of them for giving me the opportunity to be the head basketball coach, and I wish both of them well."