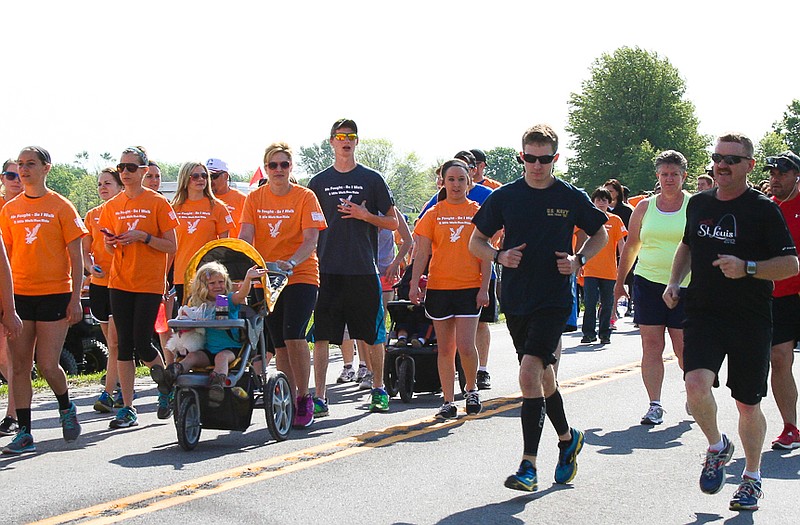 Walkers and runners take part in the 5K dedicated to Corp. Leon Deraps.

"They have to write an essay on good citizenship, and it's just not a gimme," Dale Deraps said. "We actually critically appraise their efforts. We just try to give them a boost, so we can continue to support our community, and keep Leon in our memories and in our hearts. It's kind of bittersweet in a way."

Leon Deraps joined the Marine Corps the day of his 18th birthday, like his father. After engineering school, he was sent to Camp Pendleton in California, then his seventh engineering support battalion was called up and sent to Iraq.

There, he built post offices and different types of buildings during the day, and at night, did road patrol.

"They were on one of those patrols when they got hit with an IED," Dale Deraps said. "Unfortunately it was right under his truck. It was pretty much a shock to us, as you can imagine."

Since Leon's death, his family wanted to honor him in every way possible, and something family friend, Kim Barbour, thought of was this event. More than 300 participants were signed up.

"I just came up with the idea and ran it across Omie (Johnson, Leon Deraps' sister) seven years ago," Barbour said. "I thought it'd be great to start at the family's chimney business and we end up where Leon is buried. It's a great walk and has beautiful scenery."

A large crowd wearing neon orange T-shirts that read, "In loving memory of Leon B. Deraps," showed their support of the family and the scholarship fund.

"This is a major event every year," Dale Deraps said. "Our family gets together to pull this off. We expect the boy to pull his weight, and he does. He's around here somewhere."

May 6 marks the eighth year anniversary of Leon Deraps death.