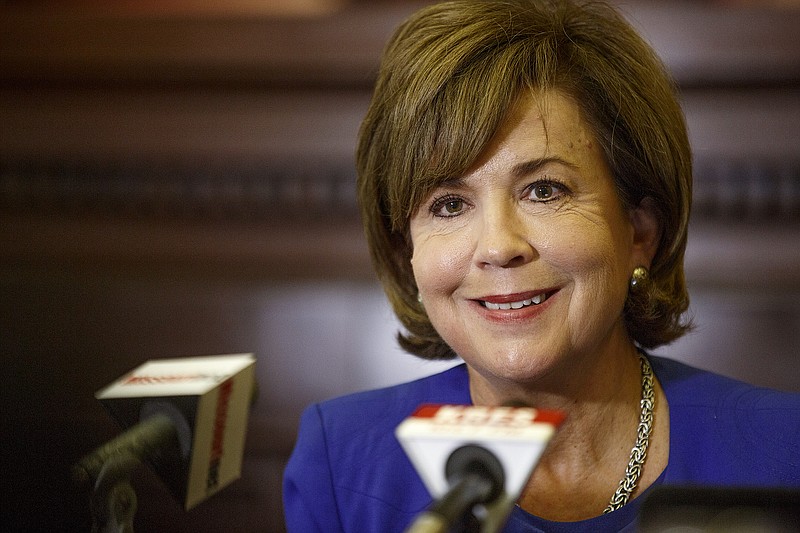 Chief Justice Mary Russell speaks to reporters Tuesday at the Missouri Supreme Court about what has changed since she took the job in June 2013.

Unlike the U.S. Supreme Court, where the chief justice's job is a lifetime appointment, Missouri judges rotate the post every two years.

"It gives everybody a chance to have the leadership role," Russell told reporters Tuesday afternoon

in the Supreme Court's main courtroom, where it regularly hears oral arguments on cases.

Russell said she started her term two years ago "with the goal of making Missouri's courts better for everyone."

She said the court system has made strong strides in technology improvements, modernization and communicating better with the public.

By this time next year, Russell said, all courts should be taking cases by "e-filing," which eliminates the need for someone personally to deliver legal documents to the courthouse.

The change also makes it easier for a judge to be reached "anywhere in this state, any time of the day or night" when a signature is needed for warrants, orders of protection or other emergency documents.

"It's now taking a fraction of the time that it used to take, when sheriffs had to go knock on the door and find a judge in the middle of the night," she said.

Russell said the court system, along with the Missouri Bar, is already beginning to talk about the possible effects from the "silver tsunami," when in 15 years, it's predicted 20 percent of all Missourians will be 65 or older.

"That's going to have a huge impact on our (legal) profession," she said, with a greater need for lawyers to specialize in elder-care issues as well as a number of current lawyers deciding to retire. Russell also noted nearly 30 percent of current judges, could retire now if they so chose.

Changing and modifying municipal courts is another issue the court system will continue to address during Breckenridge's two-year term, she said.

As chief justice, she has received many invitations to give speeches about the court system.

"I've been honored to be able to speak to a lot of different groups about how the courts work," she explained. "We're such a mysterious branch of government.

"Anything that I, or my colleagues, can do to make the courts better understood, we're happy to be invited to do."

With adult groups, Russell said, she often gives some the chance to discuss some issues the court has already heard, and the laws or constitutional questions raised in those cases. "Then we have an open discussion on how would they vote or decide the case," she said. "And they can see that these aren't really easy cases - and that sometimes, not all statutes are written perfectly clearly."

She acknowledged an increase in the number of executions the court has ordered during her term, but said that mostly has happened because "there's been a backlog of people with the death penalty (having) appeals pending in the federal courts" because of challenges to execution drugs or other issues.

Russell has talked several times during the last couple of years about her "undercover judge" work, where she's gone to courthouses "dressed in Capris and tennis shoes" and listened to people talk about their courtroom experiences.

"It's been 20 years since I've been in a trial courtroom on a daily basis, since I practiced law," she said. "Talking to people right there brought reality back to me, and reminded me, refreshed me, that there are real people behind these cases."

Also, she said, most people spoke favorably about the courts - when they felt they had been heard and treated fairly, even if they lost.