A focal point of education, community 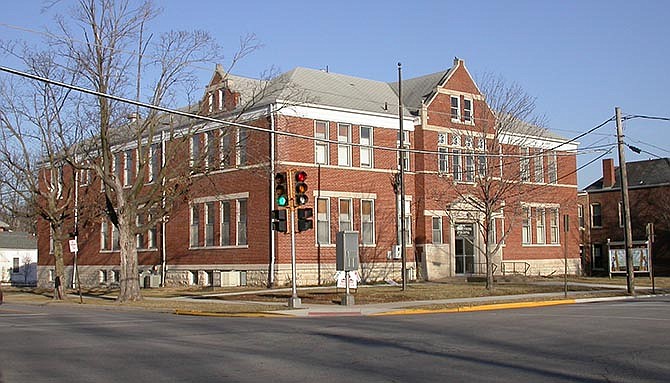 Broadway School was named a Jefferson City Landmark this year. The carpenters' union has owned it for 60 years, following its first 51 years as a public school.

Half a century of learning and childhood memories are captured in the Broadway School building, now owned by Carpenters District Council of Greater St. Louis and Vicinity, at the corner of Broadway and Dunklin Street in Jefferson City. 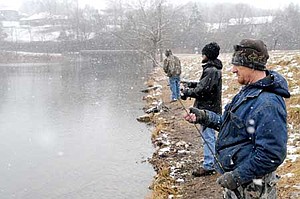 Photo by David Frank Dempsey
Edward Johnson, from left, Eddy Burwell and his father, Harvey Burwell, fish Monday for trout at the dam at Lake Atalanta in Rogers. Harvey Burwell fishes the lake often and won’t let snow or rain stop him.

"We thought that being a "patrol boy' with sashes and shiny badges made us more attractive to the girls," Schroeder said. "So we stood a bit straighter."

Some had their first musical experiences there. Bill Stine remembers being about 7 years old and singing Missourian Eugene Field's "Little Boy Blue."

Many have fond affections for their favorite teachers. For Paul Ross, it was Miss Alma Mack.

"A very pleasant woman who had a positive influence on our lives, but I suppose all first-grade teachers are so remembered," Ross said.

Compared to his previous experience at a one-room schoolhouse in Callaway County, Arthur Allen found Broadway School to be "amazing" when he entered Mrs. Craig's fourth-grade class in 1953.

"I thought the building was rather magical," Allen said.

The recently-named city Landmark was built in 1904, the result of a bond measure - that passed with 94 percent of the votes - to alleviate public school overcrowding.

Old Munichburg historian Walter Schroeder prepared the building's nomination, drawing on his own experiences, research and the memories of others.

"The school was a microcosm of the population in that part of town," said William Jens. "Students came from the "upscale' new development called "Panorama Hills,' as well as children who came from "Goat Hill,' whose parents were the most adversely affected by the Depression. The rest of us fell in between these two extremes."

This building was the second Broadway School, replacing a two-room building built in 1891. It was designed by prominent Jefferson City architects Charles Opel and Frank Miller and similar in design with its contemporaries at West and Fairview Schools.

"The plans for the two floors and basement of Broadway School were published in the 54th annual report of the state superintendent of schools, evidently as an example of recommended construction of public schools in Missouri," Walter Schroeder said.

Set in the German-settled South Side, Broadway School benefited from Lily Andrae, the first principal who spoke fluent German, Walter Schroeder said. The wintry day the students moved out, she was given the honor of locking the front door for the last time.

Boys and girls played on separate playgrounds, between the school and neighboring residences.

Broadway School served all of the South Side until Central School, now the administrative building, was built in 1919 at 315 E. Dunklin St.

By 1920, continued overcrowding resulted in the school receiving a two-story addition to the north side, which added two classrooms and an auditorium with stage and lunch room.

Before the school closed in its 51st year, moving the students to the present-day South School, it had served about 1,200 students.

Walter Schroeder described the February 1955 day when the students moved from the old to new buildings in his online Munichburg Memories.

"Boys made one last assault on the cinder pile next to the coal chute and played on the school's back steps," he wrote. "For the final time, the janitor let the boys ring the handbell to signal the end of recess before they filed through the front doors."

Aside from school, the building hosted chili suppers and other fundraisers, music and drama productions, elections and even served as the World War II collection point for newspapers and tin and distribution for ration books.

"Oral histories of South Side residents invariably comment on the school and the central role it played both in education and as a playground and neighborhood center," Walter Schroeder said.

The carpenters' union has owned the building for the last 60 years, maintaining the building's original Classical Revival style.

"Except for the (front) glass doors, the exterior of the building is totally unchanged from its 1904 construction and 1920 addition," Walter Schroeder said. "That is absolutely remarkable!"