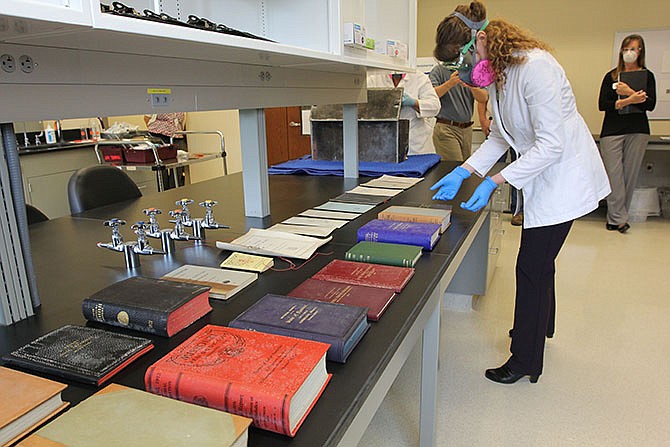 The contents of the Capitol's 100-year-old time capsule were removed Thursday by conservators from the Missouri State Archives.

Missouri state workers donned masks and blue gloves with the care of surgeons to cut open the Capitol's 100-year-old time capsule Thursday, revealing relics such as a Bible, photos of the Capitol's groundbreaking ceremony and yellowed newspapers.

The box - placed inside the Capitol's cornerstone June 24, 1915 - was opened in preparation for a ceremony marking the building's 100th anniversary.

"This has been preserved incredibly well," Cathy Brown, the Office of Administration's facilities management, design and construction director, said as the box was opened.

OA staff did not invite members of the media or the general public to the unveiling, citing cramped quarters and concern for the aged items from the time capsule.

But in a move telling of advances in technology since the box was sealed, hundreds watched through the new live-

streaming app for smartphones called Periscope as the century-old keepsakes delicately were lifted from the copper box.

For some context, the first transcontinental telephone call took place in 1915.

A news release noted the box was opened in the state's Public Health Laboratory just east of the old MSP grounds, with conservators present to ensure safe handling.

• Newspapers dated June 23 and 24, 1915, with publications including the Jefferson City Post (a predecessor of the News Tribune) as well as the Kansas City Star, St. Louis Times, Democrat-Tribune and a German-language paper, the Westliche Post.

• Items relating to the Capitol's construction, such as the contract and specifications for the new building, the architects' contract and photographs of the 1913 ground breaking.

Other items placed in the copper box a century ago included the Legislature's Acts of 1911, including the law creating the Capitol Commission and the amendment authorizing the Capitol's construction; a program of the architectural competition for the building's design; copies of the addresses given at the cornerstone ceremonies by then-Gov. Elliott Major, who served from 1913-17, and his predecessor, Gov. Herbert Hadley, 1909-13, who was in office when a lightning bolt ignited the Feb. 5, 1911, fire that destroyed the previous Capitol; and a listing of all Missouri public libraries in 1915.

While black-and-white photos of dignitaries and newspapers costing one cent served as further reminders of how much has changed since the capsule was made, news clippings also showed similarities between life in Missouri now and 100 years ago.

For example, newspapers noted flooding at the time the box was sealed - on Thursday, Gov. Jay Nixon declared a state of emergency because of the current flooding.

Nixon plans to unveil the capsule publicly and dedicate a new time capsule during a July 3 ceremony on the Capitol's South Lawn.

Burns said plans still are being made for a public display of the items removed from the 1915 time capsule.

Eventually, she said, they will be housed in the Missouri State Museum at the Capitol.

Missourians have until midnight Saturday to suggest items to be placed in the new time capsule.

Burns said officials also are deciding where the new container will be placed so it can be opened 100 years from now, and hope to make that announcement as part of the July 3 ceremonies when its contents also will be announced.

She said the new time capsule won't be put in the cornerstone.

Photographs and video footage of Thursday's opening of the 1915 time capsule can be seen online, at mo.gov/timecapsule.