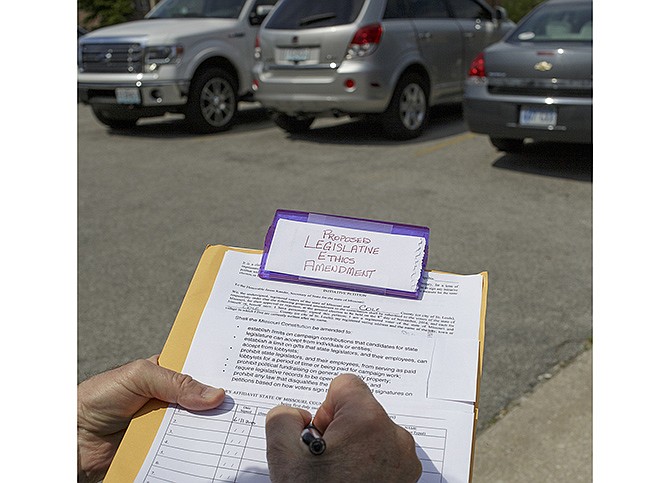 Missourians soon may be asked to sign petitions seeking various changes in state laws or Constitution.

Missourians soon may be asked to sign petitions seeking various changes in state laws or the Constitution.

Since at least 1875, Missourians have had the power to make those changes, through initiative petitions.

In recent years, that power has been well used.

And Secretary of State Jason Kander's office already has been asked to approve 65 petitions for the Nov. 8, 2016, general election - although, so far, only 14 have been approved for circulation to the public.

Under the current law, a petition must be approved for circulation by the secretary of state's office (with assistance from the auditor and attorney general) before it can be taken to the public.

Then completed petitions must be submitted to the secretary of state's office no later than 5 p.m. the first Sunday in May - which is six months to the day before that year's November general election date.

Some petitions get challenged in court because someone - usually an opponent - objects to the ballot title or fiscal note that must appear on each page given to voters for their signature.

So even approving a petition for circulation doesn't mean its sponsors hit the streets as soon as the secretary's office approves it for circulation.

Four of the 14 proposals approved for circulation seek to change state law, while the other 10 propose constitutional amendments.

Three of the four law changes seek increases in Missouri's minimum wage - to $9 an hour the first year, followed by $1 an hour increases each year to $11, $12 or $15 an hour, depending on the petition.

The fourth would modify "prison terms for nonviolent felony drug offenders serving a sentence without probation or parole by allowing such offenders to serve a minimum percentage of their prison term, depending on the number of previous convictions," allow courts to lower a sentence in some cases, and permit courts to order alternative sentences in nonviolent felony drug cases.

Three would change Article I, which is the "Bill of Rights."

One of those would "allow the production, sale, distribution, and consumption of marijuana and hemp products by persons at least 21 years old," including the use of marijuana for medical purposes; "permit the state to establish a tax and authorize regulations and licensing procedures for marijuana;" and change criminal provisions for marijuana offenses, according to the ballot title.

Another amendment proposing marijuana legalization would amend the Constitution's Article IV, which controls executive branch operations. That proposal also would require the "release (of) all persons who have non-violent, marijuana-related offenses from incarceration, probation, and parole, and expunge the records of their offense; and prohibit state funds and law enforcement from being used to enforce federal marijuana laws."

The other two Bill of Rights changes propose to prohibit "any law that interferes with parents' decisions regarding their children, including custody, upbringing, education, religious instruction, discipline, physical and mental health care, and place of habitation," and would prevent "all government entities from pursuing any action that does not allow parents to make those decisions," unless the decision threatens clear, immediate, and substantial physical injury to the child.

Three of the proposed amendments would change the Constitution's Article III, which controls legislative operations.

One would establish campaign contribution limits for legislative candidates, limits "on gifts that state legislators, and their employees, can accept from lobbyists," and prohibit lawmakers and their employees from serving as paid lobbyists immediately after their terms end, "or being paid for campaign work."

• Reduce the 163-member House of Representatives "to 50 members and electing each member statewide rather than by legislative district" and "awarding House seats based on the total statewide percentage received in the general election by each political party and independent candidates."

• Repeal term limits for lawmakers who voters approved in 1992.

One of those is another proposal changing the campaign finance laws and limiting contributions.

The other would restore voting rights to "individuals who have been convicted of a felony or are in prison to be eligible to vote, unless such individual has been convicted of treason or a voting-related felony." Currently, convicted felons lose their right to vote but can get it back, under some conditions, after completing their sentences.

The secretary of state also has approved a petition for circulation that would change Article IX, which covers education in the state.

That proposal would "limit the duties of the state board of education" and give local public school districts more authority, "prohibit the state board from requiring schools or school districts to take any action, administer any test, or implement any policy" and give each local district "the authority to determine teacher and administrator qualifications, student curriculum, and requirements for students to advance from one grade to the next."

If they make it to the ballot, each of the proposals can be approved by a simple majority vote.

But to get to the ballot, proposed law changes must have signatures from registered voters equal to at least 5 percent of the total number of votes cast in the governor's election in 2012 - in at least six of the state's congressional districts.

Proposed constitutional amendments must be signed by registered voters equal to at least 8 percent of the total votes in the 2012 governor's election.